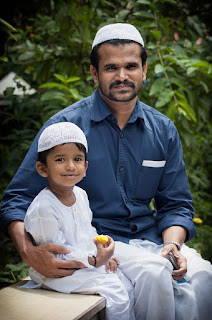 I'm thinking about fathers. I just finished a short story by a writer who was disappointed by his father. His father was abusive and died young from too much alcohol. Years later, the son was contacted by one of his father's war time buddies wanting to know about his father's life. They began a correspondence. Soon a picture arrived of the four Navy buddies at a bar with the son's dad smiling boyishly in the middle of the pack. Eventually the correspondence led to a meeting with the three remaining war time buddies; three seniors around a kitchen table with the one middle aged son. In the reunion picture shared with the story, the son took the father's place in the line-up. The story ends, "And I am in my father's place."

Are we sometimes destined to do that as sons? Do we take our father's place?

I've considered myself fortunate as I've had several father figures in my life, male mentors that were there at the time I needed them. They weren't a replacement for my father, but they modeled a different way of being male in the world that could be integrated with early family experiences and personal genes.

There was Randy and Ken, who both taught me how to find the words I needed and to speak with confidence. There was Ed, who helped me learn how to respect rather than conquer a mountain top and Richard who showed me what  patient and untroubled crisis management looked like. There was Bob, who modeled how to balance joy with pain, laughter with suffering and be a truly welcoming neighbor. There was Harivalah, who instructed me in what justice and service looked like and Ramachandran who showed me the color of wisdom. There was a second Bob, who always had my back, even when I probably didn't deserve it. And there was Narayan, who made me recognize the dignity and integrity of Truth.
They were all my elders, like my father. They were all instrumental in shaping who I would become. When I think about it, I really have taken their place in a world that needs what my father and each of the others had to offer. I've tried to integrate a piece of them into my own space in life. Most of them are gone now, so someone has to take their place, don't they?

How fortunate for me! How privileged to have so many male models when many young men have none. It makes me wish that all men could be elders and mentors, as well as parents, to younger men. Whether it's volunteering as a big brother, coaching a sports team or working with a church youth group; young men need male role models, beyond the primary one at home. And they need the kind of father figures who can share the best of what it means to be male with them.

Another wish I have for men is that they could be more involved in the birth process. It is so intimate for mothers and usually so distant for fathers. It makes one wonder if that's why the male parenting role is often the distant, authoritarian one ("Just wait till your father gets home."); with the mother alone for nurturing and comforting the children. 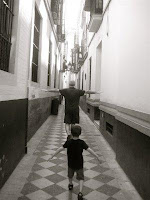 And it makes me wonder if the absent birth father from the creation of life, might also be a reason for the seeming male ease with the taking of life. Men simply don't know, intimately and physically, what it takes to create life. Usually the male role is finished quickly. Maybe it takes nine seconds, not nine months.

My major research paper in Seminary was on "Human and Divine Fathers." It was a study of Jonathan Edwards and William Adams Brown. My interest was to see if there was a fatherly resemblance. Does one's human father influence one's conception of God, the divine father? There weren't any clear conclusions from the paper, although Edwards was fertile ground for further exploration. Consider his well known work, "Sinners in the Hands of an Angry God."

Without certain evidence, I'd still make a generalization. Most authoritarian human fathers help create authoritarian conceptions of God. You need especially loving and nurturing mothers or lots of father figures to balance the scales and give God a bit of grace, a bit of forgiveness, some humor and love. And authoritarian males like not only sons who obey and Gods who have strict codes of discipline, but also rulers who carry a big stick. Compassion is not their forte and punishment is understood as justice.

Unfortunately for sons and nations, confined to authoritarian father conceptions of divinity, they don't know that God is so much larger and glorious than those limited realities. All our Godly metaphors pale in comparison to: "When I look at thy heavens, the work of thy fingers, the moon and the stars set in their place by thee, what is man that thou shouldst remember him, mortal man that thou shouldst care for him?" Or, as 1 John says so well and simply, "God is Love."