A Stranger In The Kitchen

Over the last twenty years or so, it has become the custom of the various congregations on our island to offer free hot meals to all comers during the winter months.  Currently, all seven days of the week are covered.  The meals vary from a fixed menu of lasagna and salad for lunch on Sundays to a chef catered dinner on Saturday evenings to a grand potluck on Wednesdays.  Our little congregation provides home made soup and casseroles and dessert on Tuesdays.
The suppers draw from a varied population.  Some folks are homeless.  Others are young families struggling to make ends meet.  Still others are alone and in need of the social contacts.  Many are seniors who don’t enjoy cooking for one person.  The one thing all the community suppers hold in common is that they are open, welcoming places for members of the community to gather throughout the gray winter months regardless of what draws them.
Last Tuesday we served spaghetti with meat sauce and a salad augmented  by a corn chowder and a rice and bean casserole contributed by two of the guests.  Following the meal, the clean up has also become a community thing.   Guests bring their dishes to the kitchen.  Some volunteer to scrape.  Others to load the dishwasher.  Still others put the folding chairs away and store the tables until the next time.  Often a sense of joy and “family”  floods the atmosphere.
After dinner one of the guests joined me in the kitchen, eager to scrape dishes for me to rinse prior to loading  them in the dishwasher.   A three day stubble, multiple layers of clothing, and a sweet uncertainty about whether he had a place at the table hinted at his possible life circumstances.  He remarked about his gratitude for a hot meal.  I told him I was happy that he had enjoyed it and that I was glad he had come.
He said he had traveled around a lot and eaten in a lot of places, but he had never felt  welcomed until he  decided to try out the community suppers.  He innocently marveled at how kind people were, and how they made him feel at home.  He said he didn’t always know that churches were places where he would be welcome, but he thought that there was something in the Bible about being kind to strangers.  I had to turn my attention to the dishwasher so he wouldn’t see tears welling up.

Over and over again the charge of our sacred texts is to welcome the stranger.  We are admonished over and over again: You shall not wrong or oppress a resident alien, for you were aliens in the land of Egypt. (Exodus 22:21)  Both the command and the rationale are given in the same sentence.  We have all been strangers at one point or another in our lives.  The importance of remembering what that feels like needs to be connected with our compassion for the stranger we meet at any moment.
Out of curiosity, I consulted Webster for the meaning of  the word “estrange.”    It means to remove from customary environment or associations; to arouse enmity or indifference where there had formerly been love, affection or friendliness.
So much of our global public discourse these days has to do with the question of “what to do with the stranger?”   Even on a small island with a relatively intact sense of community we cannot escape the challenges that come with stress-filled movements of  so many human beings who have literally been estranged - removed from their customary environments by war, persecution, hunger, threats of slavery , poverty, or homelessness - and now by increased rigor in enforcing immigration laws, and by the threat of deportation.   The less than compassionate response to the stranger is fear, indifference,  and increasingly, enmity.   We have become strangers who estrange others. 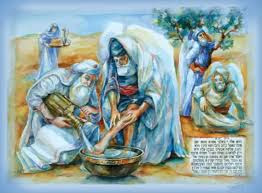 The ancient text of Genesis tells us that the patriarch, Abraham, was sitting at the entrance of his tent during the heat of the day when three strangers approached him.  He offered them water, saw to it that their feet were washed and ordered that a feast be prepared for them.   There is a tradition that Abraham’s tent was open on all four sides so that a stranger would not have to search for the entrance in order to find hospitality.  The stranger was not to be feared and rejected, but welcomed and made to feel at home.
I had to reflect awhile on the meaning of the tears I felt welling up when I heard my new dish-washing partner wonder at how welcome he felt in our little church.  I wondered why he was surprised; wondered why he couldn’t just take it for granted that he would be welcomed in a church.  I don’t know where his travels have taken him or what he encountered along the way,  but it was clear to me that he had not always encountered hospitality from some of those most responsible for offering it freely.
I went to bed with a little prayer of gratitude.  Maybe it was only spaghetti with meat sauce, a bit of laughter and fellowship around the table, a little shared labor in the kitchen after dinner - - but at least we were doing something right.