Race and the Media


Back in the late 1970's, there was a revolution happening in the Central American country of Nicaragua. After forty some years of dictatorship under the Somoza family dynasty and their control of the National Guard, the people of the country had enough. They overthrew the regime and established a communist  government under the Sandanistas. 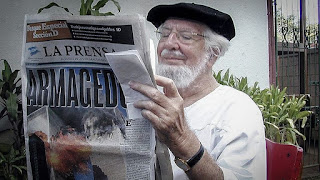 During that revolutionary period, I recall watching film on the evening news of demonstrators against Somoza being pursued by tanks through the streets of Managua, the capital city. Shortly afterwards, I was in Mexico for a course on Liberation Theology. Watching the evening news in Mexico we saw film on the same demonstration, with one difference.

In Mexico, the camera was wobbling all over the place. The view was not steady, because the cameraman was running through the streets with the demonstrators, looking back at the tanks. In the U.S., the cameraman was either riding on the tanks or walking with them. His hand was steady.

It was a lesson for me on "point of view." It makes a difference whether you are with the cat or the mouse, with those with weapons or those without, with the powerful or the powerless.

I've been watching the mainstream media coverage of the conflict at Standing Rock. When you compare it to the coverage on social media, it seems like there must be two distinct worlds, not just two world views. It's the difference between prayerful and peaceful water protectors and unruly, rioting protestors.

And then mainstream media always emphasizes the "3.8 billion pipeline."  Those figures hardly ever come up in social media. The only time money gets mentioned is when camp supporters document how much money the President-elect has invested in the pipeline, or how much is needed to continue winterizing the camp.

A difference between the Nicaraguan revolution and the one in North Dakota is that there were a limited number of cameras in the late 70's. Everyone at the camps in North Dakota has a camera. And pictures can be shared, instantaneously. The whole world is watching and any brutality or injustice can be exposed.

But some will say even visual evidence can be manipulated. So they give more credibility to personal testimony, to the reports of those who are present and experiencing the events. Brookings residents have an opportunity to hear first hand from two women from the Standing Rock Community this coming Wednesday, November 30.

Avis Little Eagle is a journalist and publisher of the Teton Times and has held several offices in tribal government. Phyllis Young is the founder of Women of All Red Nations and is recognized for her work in local government as well as internationally. Both will be present and speaking at 7:00 PM at the United Church of Christ on Eighth Street South Wednesday night.

Lurking in the background or hidden in the fine print of every report from Standing Rock is the issue of race. As a society we still aren't comfortable uncovering our historical baggage. To look at the racial divisions in this country honestly raises questions of responsibility, accountability, guilt and forgiveness. Every time questions of race are raised in a serious way, the dominant culture tries to ignore them or repress them with overwhelming force, rather than facing them with courage and commitment. 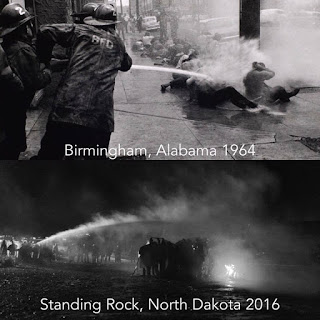 It's no accident that many are sharing pictures, side by side, of the hosing of black civil rights protestors in the segregated south to the hosing of Native American water protectors in what is increasingly known as the Mississippi of the north.

There are other similarities. Both have their outside agitators, who if they would just leave, then things could return to normal. The mayor of Bismarck is pleading with all of the outsiders to just go home for the holidays.

I heard someone say "race relations in this country is like an old house." We live in an old house! Built in 1890 there's something strong and resilient about it. But one small problem can also reveal a deeper problem hiding below the surface. You can paper it over or ignore it but eventually the fundamental issue will have to be treated.

Standing Rock is raising some fundamental questions about our relationship with indigenous people. It's not simply a U.S. problem, it's global. Witness the tribal peoples coming to North Dakota from many different countries and every continent. We will either continue ravaging and consuming the resources of the planet to our destruction, or we will sit at a table with first peoples and learn how we can live well together.