Recently in a class I am taking at South Dakota State University titled Peace and Conflict Studies, I read a short excerpt from a book titled "Approaches to Peace", assembled by David Barash. He talks about how people who practice nonviolence must do so with "a willingness to be abused by the authorities and yet to respond nonviolently, with courage and determination, even politeness" (Barash 243). 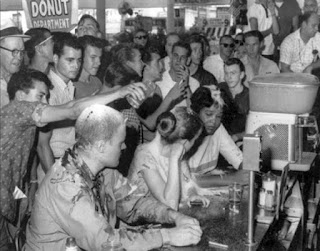 I found this notion very intriguing, especially with all that is going on in the United States today. There are many movements and protests, violent and nonviolent, happening all across the country. However, not many of these affect me personally. Living in small town South Dakota, I don't really have to concern myself with these movements unless I want to.

I think many people are confused by the notion that fighting for a cause must contain violence in order to win or subdue the 'enemy'. Nonviolence is not an alternative to fighting, it is simply a different way of doing so.

With all that is going on in our country, many groups seem to view their cause as having supporters and enemies. When groups use the practice of nonviolence, they are not only helping their own cause, but they are helping their opposition as well. Rather than having to end with winner and loser, why not end with a compromise or a 'tie'? 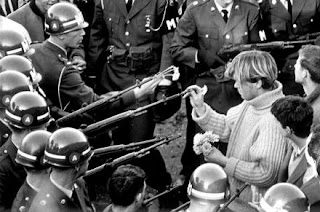 I think people very quickly lose sight of the fact that we are all living here together and can achieve a place of harmony if only we stop viewing each other as being allies and enemies. Facing issues with courage, determination and politeness could change the way the entire country takes on disagreements and movements. By keeping these three things in focus, I think that different groups could successfully work through differences and disagreements without having to incorporate the violent aspect.