Where Does It Come From?

It was a beautiful autumn in New York. We decided to take the youth from the church on a Saturday outing to a farm north of the city. One of the church members had this country home on several acres with trees and fields and a stream. It was great weather, a perfect time of year and a terrific location to be out of the noise and concrete of the city.

In my minds eye I see them now. Forty middle school students walking in a pack, close to the country home with a boom box in their midst, turned as loud as it would go. There was no movement into the fields and trees. There was no investigation of the stream. It  was as if this unfamiliar environment was not only foreign but frightening.

I'm certain if one were to ask these young people where their hamburger came from, they would say McDonalds or perhaps the Coop grocery store. They never had the experience of chopping off the head of a chicken on the farm or even watching a live pig turn into pork chops in the SDSU meat lab.

They didn't know the origin of their food, the process through which it arrived on their plate, the people who labored to put it there.

Those in rural areas can smile and even lament the food ignorance of city folk. But when you look more closely, the ignorance of where things come from is pervasive in the whole culture. Do we know where the aluminum in our car originates? There's not much bauxite in the U.S.! Do we realize the health and safety risks some take so there is copper for our wiring? Do we know the sacrifices whole communities make to supply our needs and wants? 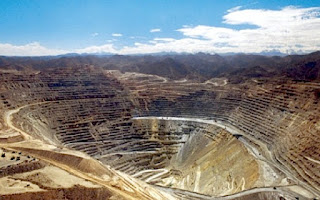 A copper mine in Peru is reported back in business after it was halted for ten days by protesters.  They were objecting to the noise, dust and environmental destruction the Chinese owned mine was bringing to their homes and communities. The mine expects to deliver 400,000 tons of the metal a year, producing a fifth of the copper output of Peru.

The protest ended after police shot and killed one of the protesters with a bullet in the head. Reports from the company say talks are now taking place to try and develop alternative transportation options as the government investigates the killing. 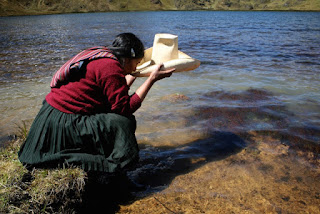 This is not an isolated incident. Oxfam International reports that 2015 was the deadliest year ever for those people struggling to protect their homes and environment from extractive industries. And of the 185 human rights defenders killed around the globe, 122 were killed in Latin America, places like Peru, where the Goldman prize winning environmental activist Mazima Acuna de Chaupe was recently attacked and hospitalized, allegedly by security guards for the gold mining company that wants her land.

And this trend continues. There have been 58 additional murders in the region between January and May of 2016. More recently, a Brazilian environmental official and two Honduran environmental leaders were assassinated.

Huge mining and energy projects, driven by financial speculators and international corporations, are trashing the Latin American landscape. They are forcing the displacement  and loss of land and livelihood for whole populations of rural and indigenous peoples.

In the meantime, governments stand on the sidelines or blatantly support the exploitation, economically dependent on resource extraction for their well being and political stability. Protocols and licenses for doing business are ignored or minimized to provide the companies with easy access and limited roadblocks.

The only roadblocks are established by the people on the land, like at the Peru mine, where the protester got a bullet to the head.

Meeting with people from all over Mexico this past June, from all walks of life, I realized that all of them were confronting mega resource projects in their own back yards. Mines, hydro electric projects, fracking; you name it, they were facing it. As we met over the course of several days, news came of the killing of teachers in Oaxaca, a related struggle. It became clearer and clearer that the common people are quickly becoming disposable. If you are a farmer, anyplace, and there are resources to be exploited where you live, you and your land are in danger. It is called "development." And enormous financial institutions, infrastructure corporations and extractive industries will convince political elites to sacrifice a few "radical environmentalists" or "Indians" for the sake of the many.

Pope Francis in his recent encyclical Laudato Si', On Care for Our Common Home, writes: "The natural environment is a collective good, the patrimony of all humanity and the responsibility of everyone." One assumes that includes clean, fresh water. 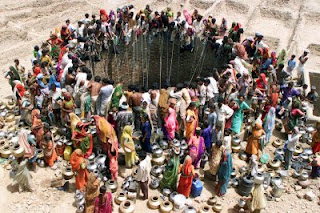 Was I talking about resource extraction and exploitation of the poor in Latin America? Or was it North Dakota? The situation playing out at Standing Rock is a historical and moral disgrace for the U.S. The political and financial enablers should be ashamed. There hasn't been a killing yet, but only through the grace of God, given the stakes.

Do we know where our water comes from? Out of the faucet, right?