A rather astonishing and frightening event continues to play out in North Dakota. As Energy Transfer Partners continues to lay pipe for the Dakota Access Pipeline, against the order of a federal judge, those gathered to protect the water and sacred lands are summarily arrested. As the state escalates their response to native peoples with more militarized police, the national guard and trumped up felony arrest charges, the likelihood of a spark to light a conflagration increases. 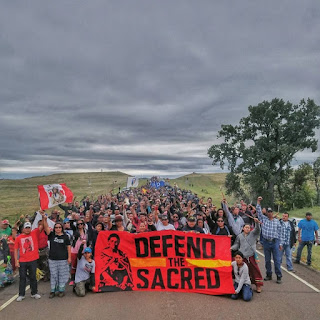 Each day of the stand off it grows more and more similar to an older struggle in our country. The comparable events in our history are the struggle against slavery and for civil rights. There are three reasons why this relationship becomes more and more evident to me with each passing day. The reasons are based in economics, the law and race.

Economics! In the days of slavery, especially and most importantly in the south, slavery was an economic engine. The economy of the whole region depended on it. The wealthy were deeply invested in owning other human beings and they were the ones who told the politicians what laws to pass to keep the slaves in their place.

The state of North Dakota made a choice to develop the Bakken oil fields. The state has made an enormous investment. Whole N.D. communities have been transformed by this boom or bust economic engine. Today, with low gas prices, they are looking busted.

But it's not only the economy of the state of North Dakota. There's an enormous economic engine involved in this struggle. Energy Transfer Partners includes some of the largest fossil fuel interests on the planet. They have the support of most of the major banks. Seventeen financial institutions have loaned Dakota Access $2.5 billion. They have also committed huge sums for more infrastructure projects. There's more than $10 billion in loans and credits from 38 banks supporting groups building the Dakota Access Pipeline. These banks will want those loans repaid, with interest!

The law! In the south during slavery the law followed the money. So it was lawful to beat your property, your slave. The law often looked the other way when the plantation owner raped a piece of his property.

In North Dakota, people can be bitten by attack dogs, children and elders can be pepper sprayed and all manner of young and old can be arrested by standing in the wrong place at the wrong time or not moving fast enough. But Energy Transfer Partners can bulldoze sacred sites, ignore a federal judge and buy the Cannonball Ranch (against  N.D. corporate farming law) and nothing happens.

Then there's the matter of race. In the south during the days of slavery and segregation, the law said some people had to drink at certain water fountains. In North Dakota, the original proposed site of the pipeline was too close to Bismarck. Some worried it might impact their water supply. So the site closer to Standing Rock tribal water was chosen. Let the Indians drink oil.

I met Chas Jewett for the first time last month in the Black Hills. She spoke about her work with Community Conversations in Rapid City. This is an effort for Indians and whites to learn from and listen to each other. From all reports it has been a productive and promising experience for those involved and the larger community.

Chas has been at the Standing Rock camp and has shared some videos. One was startling in its simplicity and beauty. She was with a group from the camp who went to the state capital in Bismarck to have a prayer service. As they are arriving, a long line of state police appears and forms a barrier in front of them. Chas is astonished! She can't believe this show of force. People have come to offer prayers. Nevertheless, a sage ceremony to purify the thoughts and behavior of the participants proceeds. Then one individual walks over to the first state trooper and shakes his hand. He moves on shaking the hands of all those in the line. He is soon followed by all those gathered for the prayer service. It's the most exceptional scene of de-escalating potential conflict I have ever seen.

There was a second similar incident just the other day. It was a stand off at a rural road intersection. The same thing happened. Native people offered the hand of relationship. 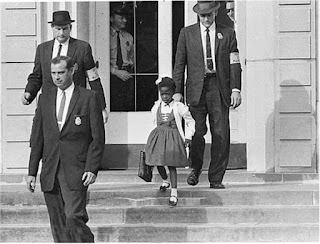 The image I keep seeing in my mind's eye is that small black girl on her way to an integrated school for the first time.  I saw her again in a video from up north yesterday. She was a different race this time. She was facing militarized police arresting people around her. She slowly moved off to the side out of the picture. I wanted a nonviolent army there to surround her, to protect her, to help move her and all of us into a more just, more human and livable future.

This is a global struggle. First Nations people were at the N.D. camp recently from Ecuador, where they were left with Chevrons toxic mess. All over the planet indigenous people are struggling to protect their water, their land, their cultures from extractive industries. And they are prayerfully struggling against some of the the most powerful forces on the planet.

Like with slavery and segregation, there are economic, legal and racial challenges implicit in this struggle. It's a David and Goliath situation. I'm praying for a similar ending.