Creating an Economy of Care

Editors Note: This is an edited sermon delivered by Rev. David Hansen August 28, 2016.

Creating an Economy of Care
It was a long reading today from the Gospel of Luke but I wanted to read the whole passage because what happens in the first part—healing the man with dropsy—holds the key to understanding the second part—and the question of seating at the banquet illustrates the first part. In order to get the full picture, we need the full story.
Dropsy is not a word we use anymore. Today we talk about edema, which is the medical term for what used to be called dropsy. Edema refers to retention of fluid in the body. It is a condition that might have any number of causes and the medical community has a specific name for each type of edema. It can be a very painful condition and may be even life threatening. It is a serious condition.
Tradition teaches us that Luke was a physician. And it may be that he is diagnosing and describing a physical condition that Jesus healed. It could also be that he is diagnosing a spiritual disease.
In ancient times dropsy was a metaphor for greed. Dropsy referred to this insatiable desire to own everything. Perhaps the man’s ailment was spiritual dropsy. The poet e. e. Cummings has a powerful little poem entitled “more,” which describes the condition of dropsy. He says in this poem, “nobody wants much, not to say most, all anybody ever wants is more, and more, and more. What are we all, morticians.” That’s a description of dropsy. It is a deadly disease.
St. Augustine said that God has created the world so that there is enough to satisfy everyone’s need, but not enough to satisfy one person’s greed.
I am suggesting that the man was consumed by an insatiable desire to own more, and more, and more. He was greedy. He had forgotten the 10th commandment, “Thou shalt not covet anything that belongs to thy neighbor.” The man in the gospel thought everybody was his neighbor, and he was entitled to everything they owned.
In a world that is increasingly divided between the have-gots and the have-nots, we are familiar with this condition. Two scholars, Jacob Hacker and Paul Pierson wrote a book a few years ago entitled Winner-Take-All Politics (Simon & Schuster, 2010) in which they document why there is this growing chasm between the one-percent and the ninety-nine percent. We are aware of the problem. It has real consequences. One in five children in Kansas, the breadbasket of the United States, the wealthiest country in the history of the world, one child in five, a total of 135,000 children in Kansas, live below the poverty line. 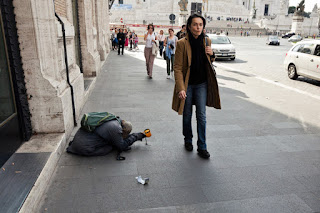 I know that poverty is a complex issue and there is no single answer or simple solution. If there were we would have eradicated poverty long ago. But I am thankful that the World Council of Churches has been wrestling in a very serious and intense way with the global economy and questions about poverty and wealth for the last 30 years. The Council has convened meetings with economists, church leaders, scholars, and people from all walks of life in conferences and study groups and they have released a number of studies. In the last few years one of these groups has published what they call “the greed line.” The authors say that if we are comfortable talking about the poverty line, we should also start talking about the greed line. If we are going to put the greed line study in the context of today’s gospel reading, we would talk about global dropsy. Those who have the most have an insatiable appetite to have more.
Like any disease, if you are going to cure it, you need to know how to identify it and diagnose it. The study group came up with four criteria to identify what Luke calls “dropsy:”
The first criteria is when the objective to maximize returns becomes an end in itself. The second is when the social and ecological consequences of maximizing returns are deliberately disregarded. The third criteria is when the pursuit of wealth results in withholding land, goods and capital from the community, and the fourth, when excessive inequality undermines social cohesion and respect for human dignity.
These criteria get played out at the banquet in the second half of the reading for today. The guest arrives with a sense of entitlement that disregards the intent of the host, undermines respect for others in attendance, and usurps the place of honor. The guest has an insatiable desire to be recognized, to the exclusion of everyone else.
Unstated, but I think implied in this parable, is the lesson of Jesus when he told the disciples, “I am sending you like sheep among the wolves. You must be wise as serpents, and as innocent as doves” (Mt.10: 16). Understand the ways of the world, but do not be seduced by the glitter and glamor of the world. Don’t sit at the head table. Don’t take the place of honor. Find another table and sit there.

We often hear this as a counsel to be humble. But humility does not have anything to do with thinking less of yourself. Humility is not about thinking less of yourself. To be humble means to not think less of others. Love one another as I have loved you. Do unto others as you would have them do unto you. That is what the Bible means by humility. Blessed are the meek—the people who respect others.

The good news is that Jesus healed the man with dropsy in an instant, and the guest who came to the banquet found another table. It’s going to take us a little longer. We cannot disengage from the world so quickly or easily. It is hard work and it takes time and dedication and commitment. But the love of God is here, and so are the opportunities for us to explore how we can create and expand what I called this morning “an economy of care,” a growing community that values the well-being of everyone who is created in the image of God. The table is set. The invitation has been made. Come, and eat this bread and drink this cup and give thanks to God.