Offering Strength from One to Another

There was a meeting of worlds, not as a violent crashing together as so often happens, but as a gentle touching, a meeting of inner and outer, from one to another. Held in the vessel of one moment in time, there came on seamless flow a meeting of personal pain and heartache and the pain of the world all around. The two became as one, the pain of one person, of all people, and the pain of the world, the world itself and of all within. That is why we were there, gathered at the State House to declare a “higher moral ground,” calling for redress beyond politics of all that besets this earth, of all that hurts people, that chains and embitters the lives of human beings, in this country, everywhere, all as strands of creation indivisible. We sang, we prayed, words spoken to encourage and inspire. There is so much to do, so easy to despair, to heal a feverish world, to lift up from poverty, to fix the justice system, to insure health care for all as a human right, and so education and employment, all the necessities of life, and the right to joy as well, bread and also roses. We heard stories of personal witness and testimony. We were as one, addressing together the challenges that weigh upon us all.

And then we began to spread out in walking vigil around the State House. As we walked, I found myself standing alongside an African American man whose collar told me he was a minister. I held out my hand and introduced myself, and he extended his hand to me.  “Hi, I’m Ron Odom,” he said with a smile. Our hands still clasped, his name took my breath away, for a moment unsure of what to do or say. I placed my other hand on his shoulder, “I’m sorry,” I said, “I’m so sorry,” speaking as to a mourner in the freshness of grief, and so it shall always be for him. In the sharing of names, the meeting of worlds, inner and outer, from one to another. We walked on quietly for a moment. I did not want to press him to say more than he might wish to say; nor did I want to ask more than he might wish to hear. Holding all the pain of the world as we walked, he began to share his own pain, worlds become as one. 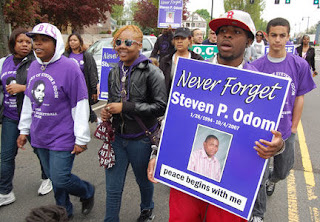 He spoke of that October day in 2007 when Steven died, his precious thirteen-year old son, shot dead steps from their home. He recounted the details that had been so much in the news, now in his own voice, hearing the shots, rushing outside, Steven’s basketball rolling down the sidewalk and stopping at the tire of their own family car. I cried softly as he spoke, his heart opening to a fellow traveler on life’s journey who was a stranger no more. And then he said with such resolve, “I’m in it, tears and all. Our weakness is our strength.”

A moment in time when all becomes one, I kept repeating his words as we parted, words of prayerful hope for himself, for each other, for the world. I wanted to comfort him, but he had comforted me. With so much hurt in every heart, the only hope is in our coming together. In the meeting of worlds, inner and outer, we hold the world’s pain and our own. It is a teaching that flows beneath the surface of the Torah portion Ki Tetze (Deut. 21:10-25:19). The portion begins with laws of warfare, seeking somehow to humanize the inhuman, ki tetze lamilchama al oy’vecha/when you go forth to battle against your enemies. Through the lens of Chassidic teaching, the surface meaning is immediately transformed, turned upside down. Enemies are in the plural, but the Hebrew suffix of address is in the singular. So too, the whole sentence is addressed to the individual, set in the second person singular, ki tetze/when you go forth to battle, understood, therefore, as going forth to battle your own personal, inner enemies. There is a meeting of worlds, of inner and outer. The Slonimer Rebbe teaches that your enemies refers to ha’oyev ha’m’yuchad shel’cha/your own unique enemies, and then he adds his signature theme, l’chol adam yesh tafkid m’yuchad she’tzarich l’mal’o/every person has their own unique task to fulfill, u’l’shem kach ba l’olam/and for this purpose they have come into the world. We each have a special task to fulfill in this world. In order to accomplish that task, we must first overcome our own personal demons. In the context of Ki Tetze, inner and outer become as one, and in the meeting of worlds violence is transformed.

Our own bodies and souls are scarred by all the strife and struggle in the world, and we are soothed by so much love and goodness that flows from heart to heart. Seeking wholeness in the world and among people, we seek it for and within ourselves. I thought of Rev. Odom’s name as I read the parasha. In Ashkenazic pronunciation, odom is the human/adam. Odom ha’rishon is the first human, male and female within one, all humanity descended from one. In Jewish mystical thought, before there was odom ha’rishon, there was odom ha’kadmon, the primordial human whose form became a template for all of creation, the world created through the human form, world and human, inner and outer, all as one. 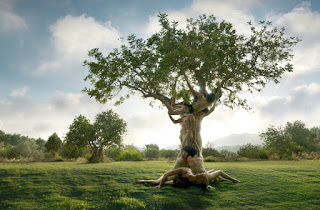 It is made clear in the Torah itself at the end of last week’s Torah portion, Parashat Shoftim, war challenged again from within itself. There, in a context of ultimate violence, another cry rising against violence, against destruction, a warning not to destroy trees for the sake of making war. The Torah says so simply, ki ho’odom etz ha’sadeh/for the human is the tree of the field. A teaching so poignant and powerful, if we are not to destroy trees, how much more so are we not to destroy people, for we are the trees of the field. Walking together for the sake of the world, earth and people as one, we find ourselves hand in hand with a friend, a meeting of worlds, inner and outer, offering strength from one to another.

Rabbi Victor H. Reinstein
Posted by Carl Kline at 11:45 AM