Imagine a large piece of prime farmland where your relatives have lived for generations, getting married, working hard, raising up children, worshipping, being laid to rest. These days, the old family graveyard isn’t used anymore. The fieldstone fence surrounding it is tumbledown and overgrown. Most of the gravestones are so weathered you can scarcely make out the names and dates. But the dead who are interred there are still part of you. As one of their descendents, you feel a connection to them, deep in your bones. 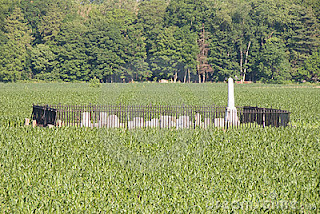 On a certain day a very rich farmer from far away comes along without warning and lays claim to some of your family’s farmland. The law, he says, is on his side. Before you can dispute him, he’s clear-cutting trees, digging new ditches, even changing the course of the river. And now he’s getting ready to demolish the family graveyard. He plans to till up the old plot, adjacent to one of his fields, so he can plant it and increase his yield.

You and your relatives pay him a visit, to protest. He’s deaf to your appeals. So you file a legal complaint. Before the judge can hold a hearing, the farmer shows up at the graveyard with a bulldozer. He brings along some of his buddies armed with guard dogs and pepper spray. You call the sheriff to intervene. No patrol cars come.

As you and your relatives yell and gesture in righteous anger, the rich farmer razes the old graveyard. Six of you are bitten by dogs. Thirty more are disabled by pepper spray. In only an hour or two, the final resting place of your ancestors is leveled, and nothing, nobody, will ever be able to put it right again….

This could never happen in America, you might be thinking. It’s a made-up story. But last weekend much of this (and worse) actually played out near Cannonball, ND. Instead of a “rich farmer,” the bad actor was Energy Transfer Partners, the company building the Dakota Access Pipeline. Instead of “you and your relatives,” the burial sites belonged to native people.

I’ve a hunch that if an Indian-owned company had sicced its dogs on white people protecting a white cemetery, the mainstream media would have been all over this story. Lawsuits would already have been filed against ETP. Heads would have rolled at the Morgan County Sheriff’s Office for not protecting the white demonstrators. But as it is, the media has largely been silent about this incident, or it has insinuated that the Indians who nonviolently resisted the desecration were somehow to blame. 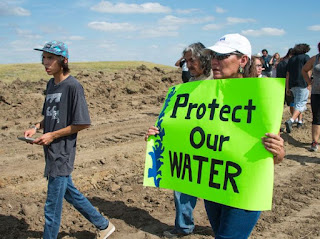 I hope you’ll join me in doing one or all of the following:

Call Vicki Granado, the public relations officer at Energy Transfer Partners (214-599-8785), and express your dismay over these abuses.
Call the Morton County Sheriff's Office (701-667-3330) and remind them of their responsibility to protect peaceful citizens.
Call North Dakota Governor Jack Dalrymple (701-328-2200) and ask him to help de-escalate the situation.
Finally, call the White House (202-456-1111) and urge President Obama to do what he can to ensure that justice holds sway.


Phyllis Cole-Dai
Posted by Carl Kline at 11:02 AM