It's All about Water


It's all about water! Although there has been spotty media coverage, a rather amazing event is unfolding in the fields of North Dakota. Indian nations are gathering and praying to stop the Dakota Access Pipeline from crossing the Missouri River.

For those who are willing to take the time to investigate, it is quickly apparent that these are not "protesters" but "protectors." For those of us living in a bubble of purchased immunity, we little realize how our most important resource is increasingly at risk. After all, for us the water flows out of the faucet or shower head into and over our bodies and we don't think long and hard about the origins. 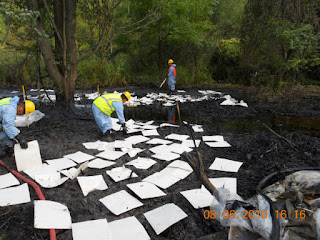 We have such short memories. The worst U.S. land based oil spill occurred in 2010 into the Kalamazoo River in Michigan. Over a million gallons of diluted bitumen went into the river. A heavy crude oil from the Alberta tar sands, much of it quickly sank. Thirty five miles of the river were closed and more than four years of clean up followed. Three quarters of a billion dollars were spent trying to bring the river back.

Subsequent investigations revealed that alarms had warned the Enbridge headquarters there had been a pipeline breach. But operators assumed it was a "bubble" in the line and continued pumping oil for eighteen hours. It was also revealed that Enbridge knew of pipe weakness in that area five years earlier, 15,000 defects in the 40 year old pipeline, but decided not to dig it up.

Or I doubt people even heard about the Canadian spill in July. 200,00 liters of crude oil spilled into the North Saskatchewan River. It took officials four days to shut down the pipeline. Communities downstream like Prince Albert were "stockpiling clean water in bathtubs and Tupperware containers." One Canadian official doubted their drinking water would be safe to drink for months.

For those with short memories, please recall the leak from Keystone 1 near Freeman, South Dakota this past April. Even with all the fancy equipment to detect spills, Transcanada had to be contacted by a farmer watching oil pool in a field. And although they first reported a spill of 187 gallons, they had to revise it once they started digging to16,800 gallons. All of that four football fields from a "sensitive environmental source," like a river?

According to Richard Stover of the Center for Biological Diversity, using records from the Pipeline Safety Administration, there have been close to 8,000 "significant incidents" with pipelines between 1986 and 2014. More than 3 million gallons on average spilled in the U.S. each year, an average of 5 incidents a week.

Significant incidents are those "causing injury, death, damages exceeding $50,000 in value, a loss of 5 barrels of highly volatile substances, 50 barrels of other liquids or there was an explosion. There have been more than 500 human deaths and 2,300 injuries through-out that period. The number of plant and animal casualties is far higher. The known property damages are valued at close to $7 billion."

The proposed Dakota Access Pipeline would not only cross the Missouri River but the Big Sioux south of Sioux Falls. It would impact four Wetland Management Districts in South Dakota: Sand Lake, Huron, Madison and Lake Andes. The pipe is already in the ground in many places, with desperate fossil fuel companies and their political cronies, their very existence in jeopardy, frantic to get it out of the ground before the market completely collapses. 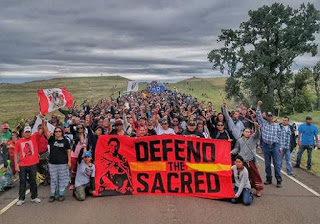 So when some try and play a "race" card and suggest it's just unruly Indians at the camp, don't believe it. Many non-Indians are campers and supporters. And when they spread rumors of pipe bombs, know the pipes are peace pipes. And when they say it's not a lawful gathering, be aware it's not natural law being broken nor God's law.

It's past time to say leave the fossil fuels in the ground. The future is in renewables. And there is no future without clean water.