I got a visual instruction on social media the other day on what to do if I get pulled over by the police. "Get my wallet, ID and registration out before the officer approaches the car. Have it in plain sight on the dashboard. Have both hands on the steering wheel in plain view. If you have to move your hands off the wheel for any reason, tell the officer why before you do it. Don't ask questions." 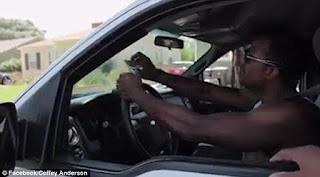 As I watched the video, I couldn't help but think of the principle we learned in grade school, "innocent till proven guilty." When did that get reversed? Was it when we started showing defendants on the evening news, telling the world what the charges were and what evidence was claimed, before their day in court? Was it when police choked Eric Garner to death or shot Tamir Rice? What happened to a basic sense of trust in the well intentioned "other."

Maybe I really started to notice the deterioration of trust with the shoe bomber. I still get upset every time I have to take my shoes off to board a flight. One terrorist and everyone is a terrorism suspect. One crazed person and the whole world has to take off their shoes. Even God doesn't get that kind of respect, with the exception maybe at Hindu temples and Islamic mosques.

I'm inclined to think a lack of trust has been slowly eating away at the body politic in this country, at least since the assassination years of the 1960s. Remember when: Kennedy, King, Kennedy? For some reason we still don't know all the secrets of the Presidents' murder!  And there is so much cloudiness in the Pentagon and CIA, in the halls of Congress and on K Street in D.C., it has to eat away at our confidence and trust in government.

Add to the murkiness the fact the present President has a "kill" list, sending drones after often unknown "others." And we have a Congress refusing to accept its responsibility to declare war and for most everything else. So we wander blindly in pervasive and perpetual internal and external conflicts that only grow more severe in targeting the innocent. We can't seem to understand that a culture in which resort to deadly force is the first option, not a last option, is a culture that is inherently unstable and unsafe. We can't trust it!

Or maybe mistrust escalated with the onslaught of vulture capitalism. When people sitting at a computer could flip stocks and become millionaires overnight. When university education changed to making a living, even making a killing, instead of making a contribution. When most politicians began selling their souls to special interests. When banks bundled lousy mortgages and made huge profits selling them to unsuspecting buyers. When corporations in the hundreds avoided paying for the public good by hiding profits overseas while the poorest paid the most. When something like Pokemon Go could raise the price of Nintendo stock by $7.5 billion in a few days but we could hardly afford Toys for Tots at Christmas.

Now we have a vice presidential  aspirant calling for religious tests for Muslim citizens. Every Muslim becomes a suspect. Some seem intent on sowing distrust and suspicion. So distrust, fear and terror wins! Trust loses! 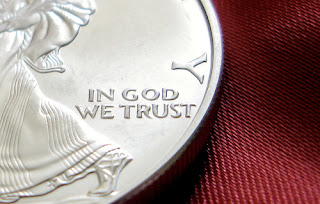 For people of the Book, one finds manifest reasons for relinquishing fear and building trust. And if we could be better grounded in the message on our coins, perhaps trust in each other could come a little easier.