Now I've heard it all! You should store firearms in your children's bedrooms for easy access, in case of a violent home invasion. At least that's the advice of Rob Pincus of I.C.E. Training, a popular firearm instruction company.

He offered that recommendation at a public presentation at the recent National Rifle Association (NRA) annual meeting in Louisville, Kentucky. For Pincus, this advice only makes sense since the child's bedroom is the first place a parent will go when the invasion happens. And if you're a good parent, you shouldn't have to worry about your kids accessing the weapons without your permission. To hear him tell it, "if your kid is going to break into the safe just because it's in their room, you have a parenting issue, not a home defense issue."

In response to an audience member, he also contended that "hidden," instead of "locked or secured," guns were perfectly acceptable. I guess Mr. Pincus didn't read about the five year old who found a gun under her grandmother's pillow five days before his speech, and shot herself dead in the head. 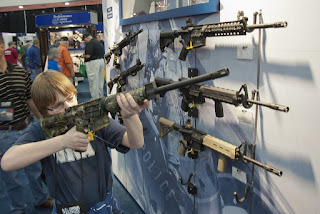 Or maybe he didn't know about the nine year old boy days earlier who shot himself in the hand with a gun he found on his lawn. Or did he know, or care, that at least 96 child shootings have occurred in 2016, where a minor accidentally shot themselves or someone else? And according to Everytown for Gun Safety, 278 such shootings took place in 2015.

But Mr. Pincus is not alone in his gun pushing insanity. The Iowa House of Representatives recently passed a bill to allow children under 14 to legally use firearms, with parental supervision of course. One representative was lamenting the need for a militia of toddlers. She claimed the bill would insure it was perfectly legal for infants as young as one year old to handle firearms.

One father at the NRA convention bragged about how his son had been handling guns since the age of three. He probably expected the seven month old he was pushing in the carriage to start soon. 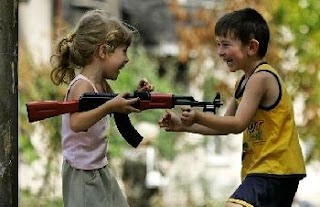 Sometimes one gets the impression the elder gun owners aren't so concerned about teaching children gun safety as they are making sure their own addiction is passed on to the younger generation. And of course, the NRA, supported financially by the weapons manufacturers more than the hunter members, wants as many guns sold as possible. So they create a new children's market, just like the tobacco companies. If they had their way, we'd probably follow Africa's lead with child soldiers.

The gun lobby also create new furniture companies, like Secret Compartment Furniture. How about a coffee table with a secret sliding drawer compartment where you can hide your handgun? Or what about an armoire where the top flips open to access your rifle?

It's lamentable that more respectable NRA members don't rein in their leadership and support reasonable gun controls. It's also lamentable how crazy the concealed weapon movement has become. If you drive, don't make a mistake driving. If you teach, don't offend a student. If you preach, don't make a parishioner angry. It's getting to the point where you have to be careful about looking at someone walking down the street, in the restaurant or any public place. What if they think you're giving them the evil eye? 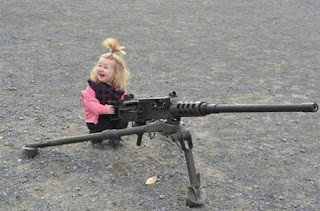 It's also lamentable that every other day there seems to be an advertisement or a front page article pushing guns in our own local paper. One would think the only happening at the Nature Center was target practice, for seniors or kids. It's like, let's engender a little more fear in the most vulnerable populations and teach them how to "defend" themselves.

Let's be honest. Anyone who conceals a gun in order to "defend" themselves is already prepared to kill another. It's that simple. And given one's mental or emotional stability, age or fear level, that other could be a spouse, a neighbor, a child, less likely an intruder.

The NRA and their apologists like to project a brave and "tough guy" image. On the contrary, it's their fear or anger driven cowardice, that makes them pack a pistol in their pants or even their child's bedroom.