Lately I've been reading before I go to sleep at night. My preference is novels, fiction. It helps keep me balanced given all the real life, non-fiction nightmares during waking hours.

Two nightmares I'm considering this morning: the plethora of political propaganda and posturing so perpetual and pervasive these days; or since it's earth day as I write this, the nightmare of the dangerous, dim witted denial by dogmatic decision makers that anything's wrong with the climate, even when Hockley, Texas gets 17 inches of rain in 24 hours.

That latter category must include Senators Rounds and Thune, as they signed a letter this week asking Secretary Kerry not to fund the United Nations organization working on climate change.

But let's leave the nightmares for another week. There are four books from late night reading to recommend. 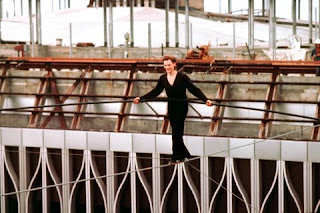 The first is "Let the Great World Spin" by Colum McCann.The plot revolves around the tightrope walk of Philippe Petit between the Twin Towers in New York City in 1974.  A 24 year old Frenchman, Petit held onlookers spellbound for 45 minutes as he made eight separate passes on the 200 foot stretch between the two buildings. Obviously enjoying himself, 1,350 feet in the air, he walked, danced, lay down and knelt on the wire. Later he said he could hear the murmuring and cheers of the crowd below. This event is not fiction. He was arrested by New York City police and later sentenced to performing for children in Central Park. You can even find pictures of his walk on the web. (If you don't like heights you may want to avoid the pictures).

But don't avoid the book. It is fiction. Philippe is not the main character, just that his walk is the event around which the story unfolds. The main characters are others who this event touches with some significance, as onlookers or connected in more obscure ways.

After saying I preferred reading fiction, two of the other books I want to suggest are non-fiction.

If you sometimes wish for greater solitude, away from the busyness and craziness of contemporary life, you might enjoy "The Consolations of the Forest" by Sylvain Tesson. Here is someone who seeks and finds silence and solitude in a small cabin on Lake Baikal on the Siberian taiga for six months. He wards off cabin fever with almost daily excursions into the forests and mountains and on the frozen lake. He befriends birds, chops wood, eats fresh fish, drinks large quantities of vodka and reads some very heady books.

Although it isn't fiction, it gives you an opportunity to escape those day time nightmares with him. Dress warm though. Those Siberian winters can be considerably worse than South Dakota.

The third book is very disturbing but hard to put down. It actually sends you to bed with a daytime nightmare instead of a quiet sleep. After the first two nights reading it before bed, I determined to just read the rest in the light of day. The book is "A Mother's Reckoning" by Sue Klebold. 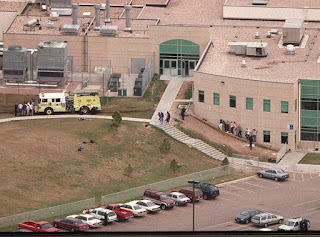 You may remember that last name from the shooting at Columbine High School back in 1999. Sue's son was one of the two shooters. They killed 12 students, 1 teacher and injured 24 others, before killing themselves. Their intention was to kill many more, given the explosives that failed to detonate.

The book is the attempt of a mother to come to terms with a horrific act her son has committed, to understand what she might have missed, how it might have been prevented, what contribution she might make to an understanding of what she calls "brain health."

One of her conclusions is that her son was suicidal. Based on evidence he left behind this is likely accurate. She doesn't use this as an excuse but it seems a stark warning to us all. (The radio news reported this morning there has been a spike in adolescent suicide, especially among girls). And these days we have even coined the phrase "suicide by cop."

The last book I've just begun. It's called "Small Wars" by Sadie Jones. The novel is set in English occupied Cyprus in 1956. Even in the first few chapters I'm beginning to see the challenge of "how honor can exist amid cruelty" and "what becomes of intimacy in the grinding gears of empire."

It's hard to truly recommend a book till one is finished. Suffice it to say "Small Wars" is engaging so far. And, I like the title. It describes too much of life. At our worst, we've strayed from our best sense of being neighbors, co-workers, a human family. Too much of life seems to be made up of small wars. Small wars only lead to bigger wars and I already sense in the novel, bigger wars are coming.

In the same way, small acts of kindness, or forgiveness, or peacemaking, small acts of conscience,  can lead to bigger blessings. We have a choice. Already, I'm seeing that in "Small Wars" as well. Read on!