There we were on a recent morning, a few rabbis and a few labor organizers standing in front of the Walk Hill Dunkin Donuts in Jamaica Plain. I found it ironic, since I often go to Dunkin, not for me, but for my dad, for whom the coffee and a glazed doughnut are as sustaining as manna from Heaven. My greatest worry was that things wouldn’t go well and there might come to be a boycott of Dunkin Donuts. All did go well and it was a moment of encountering the gentle teaching of one woman who works at that Dunkin Donuts.

As you may be aware, there were nation wide one-day strikes yesterday by fast food workers and others as part of the campaign for a $15.00 minimum wage, the “Fight for $15.” It is important to note that yesterday also marked the beginning of a strike by Verizon workers against an effort by the company to cut wages and benefits, particularly the retirement benefits of older workers. And so we waited in front of Dunkin Donuts, waiting for a worker who had stayed away from work yesterday to be part of the strike, to raise her voice for the sake of all who struggle to make ends meet while often working several jobs, all balanced with the same family and life responsibilities that we all know. We were there as part of a “walk back” taking place at many fast food locations, there to walk back into work with each worker to insure that there was no retribution for having taken part in the strike. 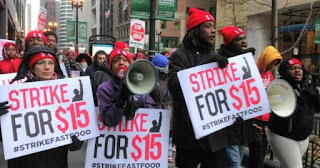 The woman we had the honor to accompany arrived with a labor organizer who was also there to insure all would be well. On the back of the labor organizer’s black leather jacket was a saying that seemed to say it all, “respect existence or expect resistance….” It is a powerful statement, so simple in its expression of a basic truth, the equal presence of every person upon this earth and in society, and the responsibility of each one to stand up for the other. We had come to stand up for one person whose existence we feared might not be respected. We had come to accompany her out of concern, but it soon became clear that it was a gift to us to be in her presence, that she was our guide and accompanying her became an opportunity to learn from her.

At first she was startled, embarrassed with the attention and care for her. She laughed and said she had been interviewed four times during the strike, that she had been in the newspaper and on the radio, and that she had never been interviewed before. She also had never been on strike before. She had also never had a raise in fifteen years of working at the same Dunkin Donuts. And that’s why she finally went out on strike. It was clear how good she felt, how good it felt to realize her own strength, to respect her own existence, and to know she was not alone. I was deeply touched by her humility and by the freshness of her own awareness of strength, the strength to do something she had never done, the strength to risk losing her job and accepting the turmoil of turning her life upside down.

That is why we were there, to help insure that she would not face such risk. After talking and sharing a bit about ourselves there in the parking lot, we all walked in together. It was a beautiful moment, as we heard that the manager was out sick. We asked the acting manager if everything was okay, that there would be no problem for our friend’s return to work. “No, she said, “everything’s cool.” They were such beautiful words, all of us feeling relief. The woman whom we had encircled laughed, hugs all around. As she thanked us before getting to work, we thanked her for her strength and for what she had taught us in her simple witness. I realized that this is the teaching of someone learning to respect her own existence, a teaching that is for all of us, always needing to be relearned and refreshed.

Respect for one’s own existence and realizing that we each have something unique to teach weaves as a thread throughout this week’s Torah portion, Parashat M’tzora (Lev. 14:1-15:33) and throughout much of the book of Vayikra. The word m’tzora is generally translated as “leper,” though it is more helpful to understand it simply as one who is afflicted, whether of body or soul, someone in the midst of a hard time, vulnerable and so easily rejected. In regard to so many who are vulnerable or in a place of distance or separation from others, the Torah refers to ways of response and return, prescribing rituals and offerings meant to bring the distant near. At the end of each section concerning one who is apart, the Torah uses the phrase, zot Torat/this is the Torah of…, meaning of that person. It can be read simply as a technical phrase, Torah as instruction regarding what is to be done to facilitate this person’s return to ritual life. In just hearing the word Torah, however, meaning teaching, or instruction as a guide for living, we are drawn to the fullness of its meaning, hearing the phrase as much more than a technical instruction. We are being told of the unique Torah of each one, reminded that everyone has their own special teaching to share, regardless of their state or situation in life. At the outset of the portion, we are reminded to open our eyes and heart to the Torah of the afflicted, those from whom we might most quickly turn away.

Each of us is at times the afflicted one, at times whole and at times in a state of brokenness. In the course of our lives, we each gather unique teaching that is our own, Torah that tells of our own life and experience, teaching that only we can share. In his teaching on the phrase, zot Torat ha’m’tzorah/this is the Torah of the afflicted, the S’fas Emes, the Gerer Rebbe, offers a loving challenge: there are found words of Torah in every soul…, but they become blocked within…; and it is for us to bring them out from potential to real. 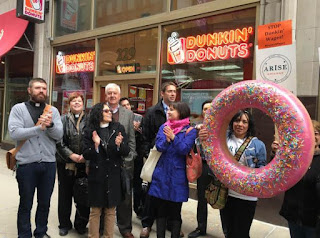 We learned words and ways of Torah that morning, the Torah of a fast food worker who had discovered her own potential and was striving to make it real. After fifteen years, one woman’s fight for $15.00 is about realizing potential, and so for all others, who like her are seeking respect for their existence. That is the Torah that she taught us in front of a Dunkin Donuts. It is the Torah that needs to go forth and spread throughout the land, a teaching of respect for each one’s existence, affirmed in the value given to their work.