For the last couple of weeks I've started a new morning ritual as I have a glass of juice and piece of fruit in our living room. I have to check out the buds on the orchid cactus. We've had it for as long as we've lived here. It has a special place in the sun where it extends it's arms and legs over several square feet. 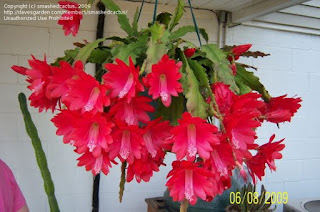 At the very beginning of the season I try to guess how many buds will appear; then how many flowers to expect. Usually there are somewhere between four and ten. This year I'm quite certain there will be six. But I'm open to surprises.

When the buds are in full flower they are a majestic red, beautiful to behold as they open to the sun. They don't all open at the exact same time so the beauty can last for several days. The sight is worth the sticky pollen they drip on the floor and the sense of loss as they gradually wither and drop.

Once we had one of those night blooming cacti that only opened once a year, overnight. If you wanted to see the flower fully open you had to catch it on the right day and in the dark.

Blooming things, growing things, require patience. I'm doubly reminded of this fact of life as the garden is planted. The promise of an early and warm spring had me putting seeds in the ground only to have temperatures go down again. And now there's a projected frost.

We're an impatient lot! Often instead of learning about growth from the natural world and adopting those rhythms as our own, we arrogantly and greedily chart our own course, nature be damned.

Every parent knows that children have their own rhythm. Some have growth spurts while others plateau. Some are ready to dive right into school and others tend to hold back. Some are introverts and some are extroverts, and parents can push and pull to move their children in different directions but there are always some built in growth patterns that give that child their integrity. Ultimately, they will grow at their own rate.

What is true in families is also true in communities. There are some natural growth processes. As population grows, infrastructure needs to grow as well. With more children a community needs more schools and more playgrounds. To build more schools you need more land and more teachers. And so it goes.

But we are an impatient lot. So we develop all manner of systems and weapons and institutions to promote growth. Sometimes the process is in harmony with natural cycles. Sometimes the growth rate is cancerous.

Some schools can get so big they eat up their students. University class sizes can get so large they discourage teaching and learning. Industrial agriculture and CAFO's can grow so enormous that the product becomes problematic. 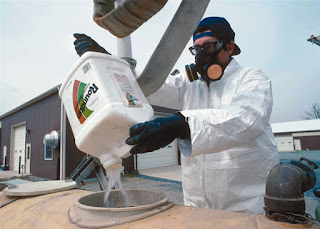 The news this morning is that 48 members of the European Parliament volunteered to take a urine test to see if there was glyphosate in their system. Glyphosate is the cancer linked weed killer found in Monsanto's Round Up herbicide. All 48 parliament members tested positive, with an average pesticide level 17 times higher than the drinking water norm.

We would probably find the same result or worse in the U.S. I followed a pickup truck a few weeks ago on I-29 with at least a half dozen 50 gallon barrels of Round Up in the truck bed. Was that going on crops you or I will eventually eat? Monsanto tells us their herbicides are helping us feed the world. But how? By reducing the population with increasing rates of cancer?

Or how about the boom and bust growth patterns one finds with fossil fuels. The new Dakota Access pipeline proponents promote this new white elephant with the promise of jobs and economic growth. And at what expense to water and land and climate? At what expense to the rhythms and harmony of nature? And who will pick up the pieces of a busted economy in the North Dakota Bakken as oil prices are low; or in West Virginia as coal has tanked; or in Alberta, Canada as tar sands workers have lost their homes in an apocalyptic wildfire.

Growth can be beautiful like our cactus, invigorating, inspiring. But as we read in 1972 in Limits to Growth, the earth is a finite system. Things grow, and die. If we are wise, we will observe and respect the inter-relatedness of all things, adopt regenerative agriculture and sustainable life styles and chart our growth accordingly.

We would do well to heed the words of Shakespeare, "How poor are they who have not patience! What wound did ever heal but by degrees." Or the Chinese Proverb, "Patience is power; with time and patience the mulberry leaf becomes silk."