The story of the Fall in the Bible is generally interpreted as a story of exile. To paraphrase Dante, the message is “Abandon hope all you who leave this paradise.” God, once the benevolent Creator who blessed all things and called them good, is now presented to us as the prosecutor, judge, and jury. 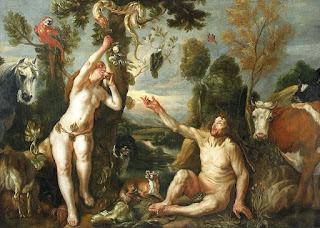 If God is the ultimate authority, the law giver and the enforcer, then the ultimate sin (crime) is disobedience. Adam, Eve, and their descendants for all time must pay the price for this unspeakable act of disobedience—a price that cannot be paid by any mere mortal. Enter Jesus. Jesus dies on the cross and pays the price that cannot be paid by another other. His death on the cross, and only his death, can satisfy the debt that must be paid for the unpardonable crime of disobedience. This is classic atonement theory in Christian theology.

I want to suggest to you that this theory, well-known as it is, is wrong. Dietrich Bonhoeffer famously said that it is unchristian to convict someone of their sin, so that you can sell them your religion. Yet this is precisely what the classic atonement theory tries to do.

Christians like the theory of atonement because it gives us the assurance that we live in a just universe. There is moral order to the cosmos. But, at the same time, we rebel against the idea that all of humanity is divided between the sinners and the saved. It seems presumptuous and more than a little self-serving that Christianity, and only Christianity, is a ticket into heaven—a free pass for believers, because someone else paid the price.

We could dig deeper into the text and examine what it teaches us about the quest for power and the genesis of fear and shame, but I want to focus on chapter 3: 9-10, where there is an exchange between God and Adam. God asks Adam, “Why were you hiding?” and Adam answers, “I was afraid because I was naked and I hid myself.” This suggests that it is fear not disobedience that transforms this earthly paradise into a no man’s land. God’s answer to Adam’s fear is not judgment but mercy. So we read in chapter 3:20, “The Lord God made for Adam and his wife garments of skin and clothed them.”

The admonition “fear not” is found 365 times in the Bible. Jesus says “Fear not” 125 times. It is helpful to draw a parallel between the story in Genesis chapter 3, and a story in the 8th chapter of Luke, where we read about a man living in a land filled with fear and bereft of grace. We are told that he is a man who wears no clothes, (he is naked) and who does not live in a house but lives among the tombs. He is bound in chains and fetters and the people of the village are afraid of him. His name is Legion, for many demons had entered him. You know the story, but do you remember how it ends. Chapter 8:35, the people hear that something has happened to the man, and they go out to see for themselves. When they arrive they find the man sitting at the feet of Jesus, “clothed in his right mind.”

Now it is the people’s turn to be afraid because they cannot understand what has happened to the man. Such is the seduction of the status quo, and the power of stereotypes.

And the man himself asks to go with Jesus. But Jesus commissions him to another task—“Return to your home, and declare how much God has done for you” (8:39).

The Bible is a book abounding in hope. It proclaims a message of hope which is good news to all people. But hope does not come easy. We have to penetrate the thick layers of fear that smother hope. We have to face the fierce truth about the relationship between power and privilege and fear. Privilege and power can be used to build up walls of fear and shame, or to break them down.

This week-end the Invictus Games are being held in Florida. Wounded veterans from 15 nations are participating in this Paralympics, organized by Prince Harry, himself a veteran. The inspiration for the name of the games comes from a poem by William Ernest Hanley entitled, “Invictus.” The first paragraph reads: 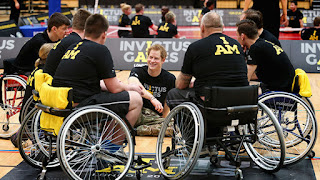 Out of the night that covers me,
Black as the pit from pole to pole,
I thank whatever gods may be,
For my unconquerable soul.

Reading about the Invictus Games I was reminded of a Native American conference I attended some years ago. It was an academic event and people were presenting papers and sharing research, when this Native American dressed in Army fatigues asked if he could speak. He was not scheduled to speak and nobody knew why he wanted to speak or what he was going to say, but being the kind of event that it was, he was given the podium. Standing before us, he said that he wanted to tell us that just that morning he had sent his son off to fight in Afghanistan, and his heart was hurting. He described the elaborate ceremony his tribe held for his son as they prepared to send him into battle, and he talked about the preparations that were being made for his return. It was a very powerful statement.

I want to conclude with another powerful statement—two actually, from Howard Thurman’s book, Jesus and the Disinherited. Thurman opens the book with a statement and a question. He says, “The significance of the religion of Jesus to people who stand with their backs against the wall has always seemed to me to be crucial.” He continues, “Why is it that Christianity seems impotent to deal radically and therefore effectively, with the issues of discrimination and injustice on the basis of race, religion, or national origin? Is this impotence due to a betrayal of the genius of religion, or is it due to a basic weakness in the religion itself?”

Thurman examines various aspects of these questions in the subsequent chapters. In the last chapter he writes, “Once isolation from one’s fellows has been achieved, one is at the mercy of doubts, fears, and confusion.” Once the status or identity of someone as the “Other” is fixed and frozen, Thurman says, “contacts are merely truces between enemies—a kind of armistice for the purposes of economic security.”

To overcome fear, isolation, hostile separation and destructive suspicion the Bible would have us believe that we must clothed in our right mind, clothed in the dignity and mercy of God. But here’s the thing. We cannot clothe ourselves. Only through our respectful encounter with others can we learn to wear these garments of grace.