Last year, my good friend came for a visit from India. Some will remember the presentation he gave at the Brookings Public Library on Gandhi and Jesus.

He had been in this country many times before his visit in 2015. When he comes, he often tours, speaking at various academic institutions around the U.S.  His theme is typically nonviolent social change, based on his scholarship with the life of Gandhi and his personal Christian faith. His vocational life has been spent in colleges and universities, as faculty, and at one point as a college President.

Given his person and background, I was troubled at the lengthy and expensive process he went through to be granted a visa last year. He had to travel by train, losing one full day, for an interview at the U.S. Consulate. Upon arriving, without prior notification, his interview had been cancelled. So he had another day and train fare to go back home. When the interview was later re-scheduled, he returned to the Consulate to discover it would take two days. He was fingerprinted and had an eye scan the first day. He had to secure overnight accommodations. The interview took place on the second day.

My friend received a visa. But it's not simple to get into the U.S. these days, even as a traveler with legitimate business, let alone as a refugee.

The World Affairs Council in Brookings sponsored a program on Syrian refugees last week. One of the speakers was Kristyne Walth from Lutheran Social Services in Sioux Falls. LSS is the primary refugee re-settlement agency in the state of South Dakota.

If I had the means to do it, I would ask Donald Trump and Ted Cruz (the worst offenders, although several governors need to be educated as well) to sit down, keep quiet and listen to Kristyne's presentation. They obviously know little to nothing about the process people already endure to enter the U.S. as refugees. 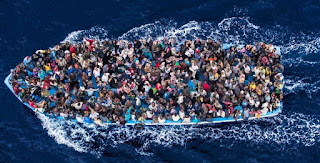 There are approximately 19.5 million refugees in the world. Many are from those countries where we have been at war or have been enabling others with the weapons of war. They have had no alternative to leaving their homes. Their chances of dying in the bombs and bloodshed or starving to death are huge. So they flee.

Kristyne outlined the process a refugee goes through.

1.First, you live in a country where you are persecuted because of your race, religion, ethnicity, social group or political opinion. You fled when your life was threatened and ran to another country to seek safety.
2.You apply to the United Nation’s High Commission for Refugees (UNHCR) for protection.
3.You are assigned to a refugee camp where you may stay for years before being accepted for resettlement into another country. It may take up to ten years or more.
4.If you are chosen for the U.S., you meet with a U.S. government official to compile personal information.
5.The U.S. government conducts multiple security checks.
6.You interview with the U.S. Bureau of Citizenship and Immigration Services.
7.You may be denied at this point. But if you progress, you will be fingerprinted, photographed and subject to a series of medical checks.
8.After this is completed and approved, you wait for resettlement. The U.S. government assigns you to a refugee resettlement agency like LSS of South Dakota. The United States only accepts a small fraction of the world’s refugee population.
9.As you wait in the refugee camps for resettlement, you have an opportunity to learn about the country and culture you will soon be joining.
10. You travel to a new land, often with just the clothes on your back." 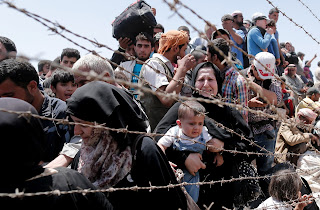 LSS in South Dakota helps refugees assigned to our state with: orientation to the community; English language training; housing and household needs; interpreter and immigration services; and employment services. Contrary to popular misinformation, refugees are expected to be financially on their feet within several months and re-settlement aid is dependent on an active employment search.

At the World Affairs forum there were other presenters who helped everyone understand better the plight of refugees and the enormous need for a humanitarian response. Shame on those who would help the terrorists spread fear of those forced to flee the ravages of war. Shame on those twice who continue to talk peace while promoting warfare against civilians. Shame on those three times who invest in, lobby for, build and sell the weapons of war, promoting and perpetuating a vicious cycle. And may God bless those volunteers and non profit agencies that are the good samaritans, helping refugees where governments and politicians fail.