From the Silence of Indifference, then to Find Our Voice and Speak


I felt horrified twice on Monday morning when I opened the newspaper to read of yet another slaughter of innocents. I sought to know of the terrorist attack in a park in Lahore, Pakistan on Easter Sunday, needing to know, dreading to know. It was an attack on Christians, yet of the more than seventy victims so many were Muslims, all as one, in death if not in life. And the children, the children, dozens of children killed in a park on a Sunday, not just any Sunday, a Sunday of resurrection in Christian tradition, of rising from the dead. If only, if only, not of one, but of all. 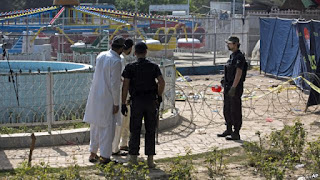 I was horrified twice, once by presence and once by absence. How to remain aware and present in the face of so many horrors, not to become numb and inured to the meaning of each individual life that is lost to so much hate and violence? I was horrified by what had happened yet again, daily, weekly, by the presence of such horror in our world that has become so commonplace. I quickly scanned the front page of the paper, preparing myself to see images of the dead and wounded, of the children. I paused and looked again, slowly now, more carefully. Then I realized that it wasn’t my eyes, there was nothing there to see. The only story about children was a report on an app to make life easier for overwhelmed parents, well intentioned and important, but not in the face of such absence. This was the absent story of children torn away, of parents overwhelmed by grief and horror, parents for whom there would be no ease. I looked down the front-page margin at the index of the day’s stories. At the bottom was a small picture of the park in Lahore, directing interested readers to the paper’s innards. Facilitating avoidance, there was nothing to grab the casual reader on the front page. I was horrified by the story’s absence, by the absence of urgency, an absence that separates us from other human beings. 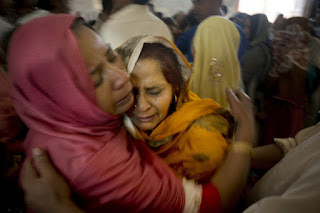 It can be hard to feel one with humanity, to feel a real connection with all human beings wherever they are. It is hard to identify with the laughter and tears, the joys, the sorrows, the horrors of people far away. Yet that is what we are called to do as part of the human family. They are all our own, all worthy of the front page. Only the week before, the attack in Brussels was appropriately a front-page story, the major headline, news unfolding through the week on the front page. Why was the Pakistan attack not similarly featured, put right in front of us in all of its horror, the human connection brought home? Did the newspaper reflect an assumption that this is a place where such things happen, that for all of the shock that should be felt, it is somehow not surprising? Were world events scanned through the invidious lens of racism in choosing front-page worthiness? These are people who are not like “us,” as in non-white, as in Muslim, even though Christians were meant to be the primary victims. Absent from the front page, they become more easily absent from our consciousness, and from our assessment of who is important, of which lives matter. When the stories of their deaths are silenced, the stories of their lives are also silenced. It is as though they never were, the children who had barely lived and the parents who cherished them. It is the plea of Holocaust survivors, that the dead not be killed twice, that they not disappear into silence.

On the Sabbath ending that painful week, in its Torah portion and its special theme in the journey to Passover, there was teaching about the power of silence, not the silence of absence and avoidance, but the silence of encounter and embrace. So too, in the comfort of that Sabbath came teaching of death and our responses to it, of horror in the face of sudden death, of the universal reality and ubiquity of death, of the challenge to somehow go beyond and continue on the path of life. In the Torah portion called Sh’mini (Lev. 9:1-11:47) on a day that should have been one of glory and pride, as of a sun-filled day in the park, seeing his sons take up their role as kohanim, servants of God in the Sanctuary, resplendent in their finery, Aaron sees them struck down, dead before him. When Moses offers empty words, barely acknowledging the horror of what has happened, the Torah says, va’yidom Aharon/and Aaron was silent. In response to Moses’ silence of absence, Aaron’s silence thunders in its presence. Soon after, still hearing the echo of Aaron’s fully present silence, we come to the very middle of the Torah. The very middle of the Torah is in the silent space between two words, darosh || darash/search || truly search. In the course of our seeking, we come to that silent space, a place of pregnant solitude in which all is held, all that comes before and all that flows beyond, a place of presence and pause, of possibility.

Of silence and its possibilities, Elie Wiesel speaks of three types of silence. He speaks of “practical silence” as that of indifference: “The world is going to its doom, and mainly because of its indifference…; not so much hate but the indifference to hate…” (“Against Silence, the Voice and Vision of Elie Wiesel,” ed. Irving Abrahamson, p. 55). He then speaks of silence that is “a gesture, an act, a deed, a testimony against indifference…; a very eloquent silence, a screaming silence, a shouting silence…” (Ibid, p. 56). The third silence of which Wiesel speaks is a “mystical silence, a poetic silence, …a creative silence, which is a mode of language.” It is through that silence, a silence of awareness that we come to know what needs to be said, what we are called to say. In the newspaper’s silence of indifference that would make us mute as well, we pause to find within ourselves the creative silence that becomes language, then to find our voice and speak.

That Sabbath, a day of resting for inspiration, was also the third of three special Sabbaths that bring us to the month of Nisan, helping us to prepare for Passover, for freedom and its journey. It was Shabbat Parah/the Sabbath of the Heifer. The additional Torah reading (Numbers 19:1-22) tells of the offering of a red heifer, a ritual by which to purify from contact with death. It is real and immediate, a way to acknowledge what is and to go on with each other, holding sorrow and hope as one. 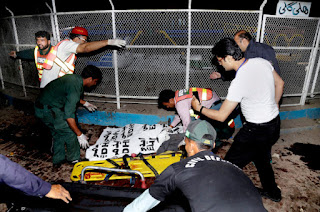 In the silence of our horror, may we hold every victim equally in the innermost place of our hearts. May the silence of absence and indifference open up to Aaron’s thundering silence and become the voice of all of those whose voices have been stilled. May the memory of all victims be a blessing, their stories told on the front page of God’s telling and our own.

Rabbi Victor H. Reinstein
Posted by Carl Kline at 10:18 AM