Last year the Prairie Repertory Theatre Company at South Dakota State University did the musical "Sound Of Music." It was well done and great fun. In my mind's eye I still see that record cover with Julie Andrews on the front and the flowery meadow in the Alps behind her. It's familiar music. Who could forget "Do, Re, Me," "The Hills Are Alive," and all the other Rogers and Hammerstein hits. 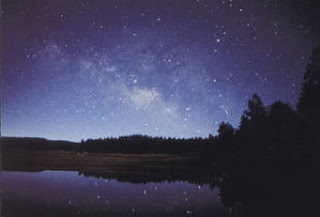 But there was one line in the SDSU play I didn't remember from previous encounters. The Abbess from the monastery and Maria were sitting together and the Abbess asked Maria why she was there at the monastery. Maria gave what sounded like a catechetical response. I'm perhaps paraphrasing here as I'm not certain of the exact text but Maria's response was like, "To discern the will of God for my life … and to do it."

Perhaps I'd heard that line before. Perhaps that idea had been communicated in my presence in various ways on many occasions. But for some reason I heard it then, during the play, as if for the first time.

This morning I was looking at video recently released of the Milky Way Galaxy. The video came from the APEX telescope in Chile. The Milky Way is the galaxy we inhabit, with an estimated 100-400 billion stars, although according to Wikipedia it might be as high as a trillion. There are probably 100 billion planets in our galaxy. And it's now estimated that there are as many as 200 billion galaxies in the universe. 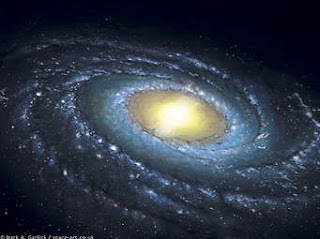 I encourage my students to look up pictures from the Hubble telescope on the internet while we are studying the creation story in the book of Genesis. If God is the Creator of all that universe out there, not just the earth and it's inhabitants, of those billions of stars in the sky, then our usual notions of God are way too small and limited. We need to ponder more seriously and act more intelligently about our place in the vastness of creation.
And when Christians talk about going to heaven, exactly where are they heading? Is it in the earth's solar system, or our Galaxy; perhaps at the very center of our Galaxy at what is thought to be a super massive black hole?

Dealing with such questions used to be the role of the University. The University was the place where you went to learn about your place in the universe. Philosophy and theology, biology and astrology, those were disciplines that woke one up to the wonders of creation. Our existence in the known universe was the subject matter.

As our understanding of what's out there has grown exponentially, our sense of our place in it all has continued to shrink. Now the University is the place where you learn your role in the job market. The will of God for our lives and our place in the universe are relegated to monastics and astronomers. Let them do the discerning and discovering. Let us make a living and maybe at some point with the right education and practical experience, even make a killing.

In Buddhism, the path to right living and the avoidance of suffering and pain is articulated in the eightfold path. As well as associating with the right people and engaging in right speech, the Buddhist eight fold path includes the idea of right livelihood. In other words, what you do in your work life should be constructive not destructive. One should be promoting life not destroying it. So if you are an engineer, perhaps you should build bridges, not nuclear weapons.

It's quite similar to the Christian idea of vocation. The word comes from the Latin vocatio meaning a "call" or "summons" (discerning the will of God for my life). A vocation was an occupation (that occupied your time and energy) that was particularly suited to your God-given gifts and talents. The trick was to identify what you were most equipped to do for the common good and then to do it. That was a vocation!

Pope Francis gave a homily on the theme a few weeks ago. He encouraged those present to pray "to know God's will for me and my life, concerning a decision that I must take; the way in which we handle things."  He encouraged people to "first pray to know God’s will, then to pray for the desire to do it, and finally when we have these things, we pray for the third time, to follow it. To carry out that will, which is not my own, … is not easy.”
He may have been using a text from the book of Romans: "Do not be conformed to this age, but be transformed by the renewing of your mind, so that you may discern what is the good, pleasing and perfect will of God.

As we face the future and the challenges it holds, one could hope and pray for a new reclaiming of an old concept. Are we made for something more?