One of the reasons people sometimes have trouble understanding racism, is they have never been in a situation where they were in the minority. It can be frightening, sometimes terrifying. Because you never know if those of the other race might harbor hate or violence toward you. And whether you are able to consciously admit it, you know deep down that in your racial group, where you are in the majority, justice for the "other" may well be lacking.

One of the reasons people sometimes have trouble understanding other religions, is because they have never been open enough to encounter them. They are frightened by what they have heard and the stereotypes that are abroad. They are afraid people from another tradition will hate them or persecute them or try to convert them. And deep down, they know that their tradition has been capable of all those things. So they prefer being in their own bubble of religious truth, in an exclusive club, isolated from difference, unable to even engage and assess the truth of the "other."

One of the reasons people sometimes have difficulty understanding the movement for LGBT rights, is they have never met anyone of a different sexual orientation. They are afraid, even terrified, given the lack of information and misinformation that they receive. They might prefer that the "other" stay in the closet and not upset their worldview. Closets hide all kinds of things and for those fearful of difference, they would bury sexual orientation in the most remote corner.

One of the reasons people sometimes want to keep out refugees, is because they have never been one. They have always lived in a place where they had work and food, and shelter and schools and hospitals, and there were no bombs going off constantly in their neighborhood. Refugees are people with significant needs and they may require those with much, to give something up. This can be frightening, even terrifying to many. They think refugees could be so traumatized by poverty and war they might resort to theft or violence. And deep down, they know that their own government is in the habit of creating refugees and any coming to their land might harbor it against them. Refugees are the "others," dying in waters and on beaches someplace else. So let "others" deal with it.

One of the reasons people sometimes have difficulty with those with disabilities, is because they are sheltered from contact. If you work in a care center, teach special education, volunteer with a community organization, or even befriend a neighbor, you learn quickly how your new relationships bring you great satisfaction and inspiration. As one observes those who are overcoming major physical or mental difficulties, one must be challenged to overcome the minor ones in one's own life. One begins to recognize the "other" is also oneself.

One of the reasons people sometimes have difficulty accepting other nations or peoples, is because of history. It's difficult to face horrific events from the past. It can be frightening, even terrifying. Often people would rather repress those events and forget about them. Or those events are relived, day in and day out, keeping the anger and hate alive, with the hope of eventual vengeance or what some might loosely call "justice." Forgiveness for the "other" is not an option.

In our U.S. society, children learn exclusion early. Ask them. They can tell you who is the "other" in their classroom. It's the child who is avoided, alone on the playground. It could be a situation of race, religion, orientation (or being accused of being gay), disability, or nationality. Maybe the child's first language is not English and they "speak funny." Maybe they are from a homeless family and they "dress funny."

But if children learn there is an "other," it's usually because they are taught it by their elders. It's not in their genes. They weren't born that way. Certainly they recognize difference, but they don't categorize it as something to fear, or worse, hate. Usually difference in the young is a reason for curiosity and investigation, not alienation and exclusion. 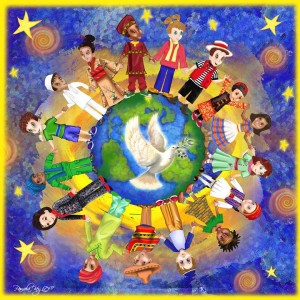