Some years ago, I took a group of twenty from the U.S. to India. Our place of residence was the Kasturbagram Rural Institute in Madhya Pradesh. It was a teacher training institution for women named after the wife of Mahatma Gandhi.

We stayed there while the school was on holiday. It was simple living. Our bed was a mat on the floor. One's personal space was a foot or two on each side of the bed. There were simple bucket showers. You filled a bucket half full and used a plastic measuring cup to pour water over your body, soap up, then use the plastic cup to rinse off.

Many in the group didn't respect the Indian bathing tradition. They bathed like they did at home, pouring buckets full throughout the process. Two days after we arrived, the well went dry. For the rest of our stay we traveled several kilometers with a bullock cart to fill a fifty gallon barrel with water at a neighboring well. Suffering through a third year of draught, the neighboring well was in danger too. That barrel had to last us for a day, for drinking, cooking, bathing, however it was needed.

My India bathing habits changed. Now I tried using a quarter of a bucket, or less, for the rest of our stay. And when I arrived home, there was a new found respect for that essential element in our lives, water. For a good year I continued the bucket and measuring cup tradition, standing in the shower, without turning it on.

These days the news is full of the water disaster in Flint, Michigan. People have been drinking poisoned water for years, with the apparent knowledge of public officials. As in most cases, this suffering hits the poor the hardest. Forty percent of the population of Flint live in poverty, many of them African American. Given the effects of lead poisoning, one can only guess what their children will encounter to keep them from making a better life. 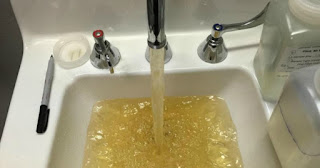 But this isn't the first or only community to suffer from poisoned water. There are some reports that many cities in this country have a similar problem. Infrastructure is old. Pipes are corroding. And levels of allowable lead can be gamed by testers, simply by following official instructions to flush before testing.

That's not to mention what has happened to water in Native American communities. Here's a culture that has traditionally had the utmost respect for the indispensable elements of life and they are suffering the most from poisoned water.

Navajo water has long been contaminated by coal mining and uranium spills. The situation there is as bad or worse than Flint. It's been happening since the 1950's. There has been no potable water on the reservation for decades. Peabody Coal drained the wells to slurry coal 256 miles into Nevada. Toxic holding ponds leak and end up in waterways. And the uranium industry, now long gone, left a water supply contaminated and draining into the Colorado River.

Louise Benally, a spokesperson for Navajo Black Mesa lamented in Washington, D.C. recently, "that no one's talking about their water situation."

We don't have to go to the Southwest to find poisoned water. We could go to the Pine Ridge Reservation in South Dakota, where testing from several sites reveals a number of metals above EPA recommended safe levels for drinking water. They include: antimony, arsenic, bismuth, copper, lead and uranium. (There are 272 abandoned uranium mines in South Dakota, many on tribal lands). Statistically, with more than one metal with high concentrations in drinking water, 46% of the population is at risk for developing multiple cancers. Pine Ridge has one of the highest cancer clusters in the U.S.

Nor should we forget the Canadian indigenous communities near and downstream the tar sands operations in Alberta. The mining has polluted the water so badly wildlife is becoming scarce and the people are getting sick and dying in astonishing numbers.

But these big operators: mines, fracking operations, fossil fuel companies (and in our state, CAFOs - Concentrated Animal Feeding Operations) use and threaten water at will; and states and the federal government let them leave the little people to suffer the consequences. It's not a surprise that the poor and politically powerless are the first to suffer. And the new Indians, small farmers and ranchers, are the next group in line. 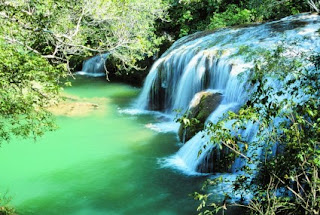 It might be wise for all of us to know, who determines how water is used and how much is used? How often is water tested for toxic substances? Who tests it? How transparent and public is the process? How careful are we of our shallow aquifers? Are our underground sources being drained by industrial agriculture, as is happening all over the mid western U.S.? What are we doing to prepare for climate change and the draught and floods it may bring? How secure and sustainable is our clean water future?

They say the human body is up to 60% water. For some living things it's 90%. You would think we would respect water and want to keep it pure.