As the presidential campaign season unfolds, I have found myself thinking that the candidates’ debates should have a rating system. I am not speaking about viewer ratings for the benefit of advertisers or for gauging political interest. I am thinking about ratings as for shows and movies that offer guidance in regard to content, warnings about violence and language that may not be appropriate for children. It seems that a helpful judge of a candidate’s suitability for office should be whether or not we would want our children to hear them speak or be exposed to their language and manner. There is real impact to coarse language, to speech that demeans and puts down others, to subtle and not so subtle seeds of hate that are cast to the winds of bigotry and bluster, the modeling of arrogance rather than humility. The prophet Micah offers such a rating standard, It has been told to you, Oh mortal/higid l’cha adam, what is good and what God seeks of you, only to do justly, to love kindness, and to walk humbly with your God (Micah 6:8).

In the end, such a rating system would not only be about protecting children, it is about protecting ourselves as adults from becoming inured to commonplace brutishness. When bad behavior becomes commonplace as part of the political process, there is a danger that its corrosive sludge will eat away at common discourse and social interaction. While such a rating system might be problematic in real terms, the question of perception and a standard that judges manner, tone, and attitude beyond the realm of reasonable political difference can be helpful. Children can be that standard. Through the perception of children and by gauging our concern for what they perceive, we are able to see a deeper, purer truth. Without artifice or agenda, children see through all that hides the essence.

Of children seeing the essence, there is a powerful and poignant midrash on the Torah portion B’shallach (Ex. 13:17-17:16). We are standing on the seashore as the waters part and a furrow of dry land appears. The midrash jumps back in time, back to slavery, back to the terrible edict of Pharaoh that the baby boys of Israel are to be killed. Becoming pregnant as an act of civil disobedience, of heroism and hope, mothers would go out into the fields to give birth. We can only imagine the wrenching moment described in the ancient words, when they would leave their precious new-born babies there in the field and cry out to God: Ribon Ha’olam/Master of the Universe, I have done mine, and now You do Yours/ani asiti et sheli, v’atah aseh et shelach (Bereishit Rabbah 23:8). In such warm human terms, the midrash then describes God as coming down to these children to care for them, first cutting the umbilical cords, then placing a stone in each one’s hands, from one stone to suckle oil and from the other honey. Through the sweep of time, we then come to the sea, the entire people about to be birthed through the parted waters. The children born in the fields of Egypt were there with their parents. In the windy rush of God’s mothering presence, breathing and birthing a people into being, the children cried out to their parents, zehu oto/that’s the one, that’s the one who did all of these things for us when we were in Egypt. 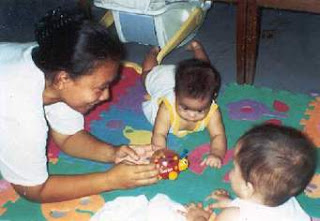 The Torah then describes God at the Sea as ish milchama/a man of war. But it is the children who have seen God’s essence, the children who remind of God as nurturer, as a caring nurse of little children. Beneath the violence, the tensions, and contradictions of this Torah portion, torn between joy for our own deliverance and horror for the destruction of others, children remind of the essence, without artifice or agenda. As truth’s essence is revealed through children, it is for us to offer them that place in the field and by the sea where they come to know the truth of love and of compassion for others. In that moment by the sea, when the children proclaim the true essence of God, the midrash concludes with words the people sang when first standing upon freedom’s shore, zeh Keli v’anveihu/this is my God Whom I shall praise, or as understood by the rabbis, for Whom I shall be a dwelling place. Doing justly, loving kindness, walking humbly, we fashion homes that are worthy of God’s dwelling.

It all comes home to the place and way in which we dwell, to the place where our children first learn the ways of being and behaving, ways of speaking and responding, the use of language and tone, whether to affirm or demean. In rating the speech and way of candidates and of our selves the scale is of love and caring, the well being of children affirmed in homes that are worthy of God’s dwelling as their nurturer.