No Human Being Is Illegal


I thought I was about to say “no,” that I couldn’t make it downtown on a Friday morning. As I opened my mouth to speak, I heard my voice saying, “yes,” that I would be there. I had agreed to be the Jewish voice among clergy representatives to a press conference held to challenge the conscience of the president and of this nation. It was a gathering to demand an end to the raids throughout the country that began on January 2nd to round up Central American mothers and children who had come seeking asylum in America. Embarrassed within myself for my initial hesitation, grateful that my lips had known to form the word “yes,” the urgency to respond to yet one more issue, one more need of suffering human beings, was brought home. The span of human needs becomes one in the faces and voices of real people, and we are called to say “yes,” hineni/I am here. 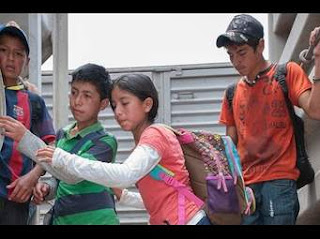 The sound of cracking voices and of tears softly shed echoed in the high vaulted ceilings of the church in which we gathered, Jews, Christians, and Muslims. A Guatemalan woman sobbed as she spoke through a translator, telling of her children’s fear that she would be deported. Her children are American citizens, and she is not. Another woman, a Unitarian minister now, spoke of her childhood in Chile, of the horrors under Pinochet, the terror of people being snatched from their homes at night, the “disappeared” of her own family who were never heard from again, the horror of realizing what would have been had she not found asylum in this country with her mother and grandmother. It is that horror of being snatched from one’s home in the night that is terrifying the immigrant community now. Another speaker pleaded with President Obama to shed tears and act with the same resolve for these children as he did in an effort to protect innocents from being slaughtered in the mayhem of gun violence. 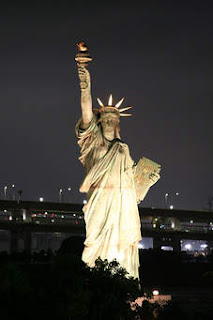 When it came my turn, I highlighted the Jewish voice of Emma Lazarus with which the Statue of Liberty speaks, “give me your tired, your poor, your huddled masses yearning to breathe free.” I spoke of my grandparents seeing those words as they came to these shores fleeing pogroms. I imagined what might have been had they been sent back. I recalled the St. Louis and the “Voyage of the Damned,” acknowledging what did happen because they were sent back. We know what happens when people fleeing desperate situations are sent back to the violence they fled. The Torah demands that we not oppress the stranger, for we know the soul of the stranger, reminding us thirty-six times ki gerim hayitem b’eretz mitzrayim/for you were strangers in the land of Egypt. From the nineteenth century, Rabbi Samson Raphael Hirsch offers a stunning standard by which a society is to be judged, “The treatment accorded by a state to the aliens living within its jurisdiction is the most accurate indication of the extent to which justice and humanity prevail in that state.”

In the weekly Torah portion Va’era (Ex. 6:2-9:35), we are still enslaved, still waiting for Moses’ midnight call to go forth to freedom. We are still at the beginning of the Book of Exodus, but the stage is now set, set in the consciousness of what it is to be oppressed. The Hebrew name for the Book of Exodus is Sefer Sh’mot/the Book of Names. Living in the shadows, hiding in fear, terrified for the knock on the door, people dare not use their names. Refugees without papers become nameless and faceless except to God. Standing forth as a model and protector, God is named here in the beginning of the Book of Names. In the portion Va’era, God tells Moses the most holy name, formed of the Hebrew letters yud hey vav hey, the name of being and becoming, letters formed from the verb to be. As God is named, so every person is named in God’s image and calling. No human being is illegal, each one bearing the image of God, documented from birth as sacred and deserving of love and compassion.

That we might each be as Moses, that we might each bear witness to God’s oneness as reflected in the oneness of humanity, that we might each affirm the words of Emma Lazarus, please add your own holy name to the letters found through the links below. Acting in our own communities in whatever ways possible to protect the vulnerable in need of asylum, of welcome, of love, let us each utter yes, I am here/hineni.”