There are several things about Islam that deserve honor and respect by all people of good will.

People of the Book, Jews, Christians and Muslims, all have sacred Scriptures. And if those unfamiliar with the Koran would read it, and the Bible as well, they would find amazingly similar material and universal values and truth. The Koran is one path to the Universal.

People of the Book have various spiritual disciplines. One is fasting.

Several years ago I decided to fast with some Muslim friends during their month long fast of Ramadan. The tradition is that you do not take food or water from sunrise to sunset. You can break the fast after sunset and take food and water before the sun rises, (should you want to get up that early).

I had engaged in fasts many times in the past. The longest was a nine day, water only fast, that I intended to do for four days, but extended twice for new and different reasons. A couple of years ago a friend and I started a Fast for the Care of the Earth that became international in scope through social media and the internet. It went on for two years with people signing up for a day or two from all over the globe. I fasted once a week during much of that period. So I'm no stranger to fasting and it's origins in Christianity.

But I was a stranger to a daily fast, regulated by the light of the sun, that so radically changed my behavior patterns. All went well for the first three days. On the fourth day I got up late and missed my water intake. My thirst was intense by sunset. That same day I watched my family eat dinner, again, as the sun sat, seemingly unmoving, in the sky. On the fifth day I told my friends I now realized I was not a Muslim, they laughed, and I broke the fast.

It was a learning experience for me. Although most religious traditions recognize fasting as a universal spiritual discipline, the paths for getting there are often different. My appreciation and respect for the Muslim practice of fasting during Ramadan was increased, having tried it myself.

Which brings me to some of the other things I honor and respect in Islam.

One of the five pillars of Islam is Pilgrimage. Every able Muslim is expected to make a pilgrimage to Mecca at least once in their lifetime. I honor and respect this in Islam. Pilgrimage is about transformation and these once in a lifetime experiences can lift people out of the mundane routines of daily secular life and drop them in the sacred waters of spiritual renewal.

All who claim a religious identity would do well to make periodic pilgrimage to a sacred site. On  my bookshelf are two volumes of an encyclopedia of pilgrimage sites around the globe, "Pilgrimage: From the Ganges to Graceland." Would I had purchased the volumes years ago and been to several. 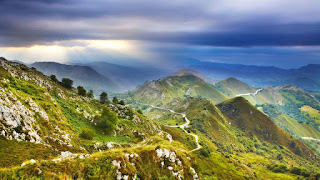 A few years ago a German friend gave me a shell to wear around my neck. It's a symbol of the Way of St. James, The Camino de Santiago. This is the name for any of several pilgrimage routes to the Cathedral of Santiago de Compostela in northwestern Spain. This is where tradition holds the remains of St. James are interred. My friend invited me to start at their house, only a short distance from one of the pilgrimage paths through Germany. I'll wear the shell around my neck when I make the trek.

A third thing I honor and respect in Islam is the discipline of prayer. I'm not aware of many in Christianity who pray five times a day, except perhaps monastics. Most Christians have even dispensed with grace at meals, except perhaps on special occasions. It's hard to pray together if you don't eat together, something Pope Francis would like to change.

A fourth thing I honor and respect in Islam is the commitment to the unfortunate. A percentage of one's income is to be distributed to those in need. And there are other moral expectations in Islam I respect. Devout Muslims should refrain from gambling, thieving, lying, drinking intoxicants and being sexually promiscuous.

The fact of the matter is, as a Christian, Muslims are my cousins. Their heritage goes back by way of Ishmael and Hagar to their forefather Abraham. As does the heritage of Christians and Jews, by way of Isaac and Sarah. We are all children of Abraham, created by the same Creator, who we know by different names.

So all of the cousins need to call our stray siblings back into the fold of family gatherings. The Creator would love to see the whole family at peace, gathered at the same table once more.