This is a common refrain from those who doubt the power and effectiveness of nonviolence as a real world possibility. They often have a stereotype of any alternative to violence as a passive and permissive response.

So here are some active steps, short of carpet bombing friend and foe alike, to stop those who call themselves the Islamic state. The strategy is two fold, both short and long term. Both paths are essential to keep the many headed beast with many names from shedding it's skin again and again and appearing in new and different  guises.

1. Cut off the money! ISIS has expenses. It takes major funds to equip, arm and pay their fighters. ISIS has donors, primarily in the Gulf states, individuals if not governments.

According to Peter Van Buren, former Foreign Service Officer in Iraq and writer at "We Meant Well," President Putin of Russia identified 40 countries that funded ISIS terrorist activities at the G20 summit. The list included some G20 countries.

Van Buren also mentions that many believe, including Secretary of State Clinton in a 2009 message revealed by Wikileaks, that donors in Saudi Arabia were the "most significant source of funding to Sunni terrorist groups worldwide."

Don't the U.S. have some clout with Saudi Arabia, where we just granted another $1.3 billion in weaponry? Since 1950, we've sent more than $80 billion in armaments their way. All this, while Saudi nationals brought down the twin towers, women were denied basic human rights like the right to vote, and beheadings, so sensationalized when done by ISIS, are common practice. On November 10, Saudi Arabia had already committed 151beheadings in 2015. 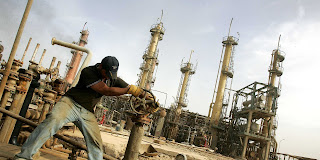 2. Stop the oil! The other source of revenue for ISIS is oil. It's estimated that anywhere from one to four million dollars a day comes from oil sales.

Oil has to get to market and someone has to buy it. With claims of precision bombing, what is preventing the destruction of marketing infrastructure? Most likely the oil leaves ISIS by way of Turkey and until recently little has been done to stop the flow.

3. Join the propaganda war! Instead of giving alternative voices air time, the mass media gives ISIS all the attention they want.

For three days, NBC evening news spread fear and terror examining every last detail of the San Bernardino killings, doing their best to tie it to ISIS. In all of that air time they spent two or three minutes with the Imam, who knew the killers and was a proponent of peace.

Why must our media do the work for ISIS? Why aren't we engaging in counter recruitment activities, in the mass media and on social media? Take that $1.3 billion dollars of weaponry to Saudi Arabia and turn it into propaganda depicting terrorists for what they really are, giving alternative Islamic voices a vehicle and refusing as a people to succumb to fear.

The longer term strategy includes the following. It's basically a process of living our values. 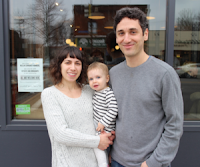 1. As is our national heritage, we could meet and greet, provide hospitality, welcome the foreigner, love the neighbor. Restaurant owners in MN recently placed a sign in their window, "Hate Has No Business Here." You may soon see posters like this in Brookings, SD as well as buttons that cross out hate.

One could join an Inter Faith Dialogue group and learn about the similarities between religions. Perhaps you would make friends across religious barriers over a meal or coffee.

2. As is the Christian heritage, people could provide the works of mercy. It's estimated the U.S. has spent almost $6 trillion on wars against terrorism. One wonders how much good will that might have earned in the minds of those without clean water, nutritional food, decent shelter and meaningful work.

For instance, terror is on a rampage in Honduras. There's no mercy there. It's the murder capital of the world. And yet Mexico and the U.S. in 2015 have sent 7,000 migrant Honduran children back to an uncertain future. 9,000 were deported from the U.S. in 2014. And of course, according to some, 5 year old orphans from Syria are not welcome here. 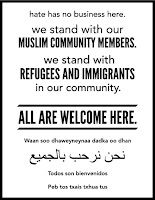 3. We could reform our economic system and the way we allow huge multinationals and financial institutions to determine our foreign and domestic policy. As long as the golden rule is twisted into "those who have the gold make the rules," we will continue to export exploitation and poverty abroad and dig deeper graves for many at home.

There are any number of ways ISIS can be countered. The only limit is willingness to use imagination, intelligence and wisdom, as distinct from the force of arms.

There are times in history where people doubt that the "arc of the universe bends toward justice." But then human beings are often short lived and therefore short sighted. Terrorists and bullies may have their day in the limelight. But there are deeper and quieter forces at work that spring from human history and human hearts. In the end, these forces will have their way.