For nearly three years now I have been watching the process of the building of a new drawbridge across the opening of Lagoon Pond.  It is an important stretch of road engineering as the bridge connects two of the main down-island towns and provides the most direct access to the island hospital for many residents.  The drawbridge also provides emergency access to a safe harbor for many boats when severe weather threatens. 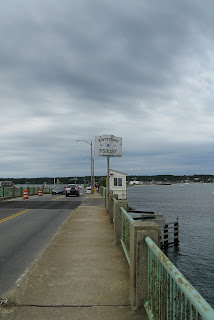 The old bridge was built some 80 years ago, give or take a year or two.  A few years ago the drawbridge began to get stuck in the raised position when the weather interfered with the smooth operating of the lift mechanism.  This invariably happened in the heat of the summer when the bridge traffic was at its height, resulting in long lines of cars on either side of the bridge and great uncertainty about when the bridge would again become functional.

About five years ago, a temporary bridge was constructed alongside the old one and subsequently the original drawbridge was dismantled to make way for a permanent new bridge.

Almost daily trips into town over the temporary bridge provided a close up experience of the complexity of bridge building.  Long before anything appeared at the traffic level of the bridge, months of nearly invisible work took place as piles were driven deep into the sand beneath the water’s surface at the mouth of the lagoon.  Tons of steel reinforced concrete formed a massive foundation.  The hidden infrastructure took months to be completed before any of the more visible structure of the bridge could begin.  Gradually, the form of what would be our beautiful new bridge began to be visible and the work moved more quickly.  Just a week ago, after much anticipation and waiting, the first cars drove across the new bridge and the connection between the two towns was made secure for another few generations.

The process of bridge building became a visible metaphor for the process of building lasting relationships between individuals and communities and nations.  Much of the building was taking place as the US Secretary of State was in the Middle East attempting to broker a complex and peaceful resolution to Iran’s nuclear capabilities.  So much of the work was invisible – done out of sight.

Indeed probably the most important part of the bridge will never be seen or appreciated by the thousands of drivers and bikers and walkers who will traverse its span in the coming years.  Very few people will be privy to all the secrets of engineering and construction that undergird the safe passage we will enjoy.  All that we will know is that we now have a much safer and much more dependable drawbridge that allows easy passage from one part of the island to another. 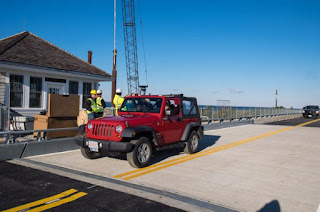 Such is the nature of diplomacy and statesmanship.  It is often a slow and subtle process, hidden from the view of the many.  We only know it is working because our lives are made a bit safer.  Much like bridge building, it is a slow and laborious process.  Waiting for the bridge to be finished often required a good bit of patience on the part of island residents when the road was closed down to one lane to permit work to continue, but the collective vision of a better bridge kept us from becoming too frayed at the edges during the process.

As our spirits are shattered over and over again by ever increasing occurrences of terrorist attacks and gun violence there is great temptation to consider violent and vengeful response - - something quick that will make a satisfying hit against the enemy - - an exercise of military power that will make a definitive statement.   The slow work of building invisible infrastructures that will create viable connections between human beings who distrust and hate each other is not very dramatic and it takes a long time for the results to become visible and effective.   But bridges can be built - - the practice of nonviolence builds the patience required - - - and therein lies hope.