I Have Seen Your Face as Seeing the Face of God


I share two recent experiences, each having challenged me to consider the nature of our engaging with others who are different than us, whether in ways great or small. Just before the Sabbath last week, I received a note from the Chassidic Talner community announcing an “emergency” Malaveh Malka. A Melaveh Malka, which means, “accompanying the queen,” is a gathering of learning, song, and food on Saturday evening following the Sabbath meant to help carry the spirit of Shabbat into the week. The small Talner synagogue had closed a few years ago. A Chassidic group that traces its line to Rebbe Menachem Nachum of Chernobyl (eighteen century), it is now a loosely organized community, remarkably open and accepting in its welcome to all. I had spent some six months praying with them prior to starting my own small synagogue, imbibing their spirit of learning, prayer, joy, and warmth. I was fascinated by the idea of an “emergency” Melaveh Malka, the invitation emphasizing the need to come together to sing and learn, most importantly just to be together in a time of such heartache. It was just following the murder of Ezra Schwartz, an eighteen year old from the Boston area spending the year in Israel, whom I realized many at the gathering would have known, and just after the Paris attacks, and so much else that we had enumerated in our own synagogue that morning.

As much as I was drawn to attend, I hesitated, knowing that for all that joins me with that community, there would be very different assumptions and views of the world and of others underlying our presence at the table together. I decided to go, finding wholeness and affirmation in the presence of people I care for and in whose spirit I delight, whatever the differences between us may be. There were moments in which I felt discomfort and moments in which I felt comforted. I was asked to share a few words of teaching. Hesitant at first, I accepted the honor and was deeply moved by the response, underscoring in my own teaching that which every heart feels, that which is universal and beyond social or political views. We all know of heartache, however much our ways of responding to and expressing pain, and hearing the ache in another’s heart, may vary. 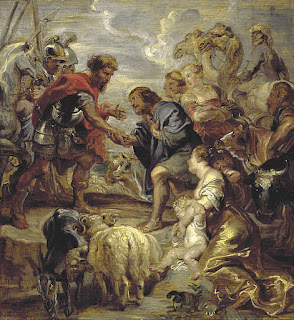 A few days prior to the Talner gathering, the very day on which Ezra was murdered, I had attended an inspiring interfaith gathering at Hebrew College, a local school of general Jewish and rabbinical studies. As part of the opening gathering, words of introduction were spoken that drew on the Torah portion called Vayishlach (Gen. 32:4-36:43). Jacob is making his way back to Canaan after twenty years, having fled his brother Esau’s anger and his threat to kill him for stealing the blessing and birthright of the firstborn. Word comes that Esau is approaching with four hundred armed men. With an elaborate plan in place to placate Esau, successive rows of mothers and children, herds and flocks were to precede Jacob in the hope of softening Esau’s heart. Suddenly Jacob went ahead, putting aside the elaborate plan in favor of direct and spontaneous encounter. We are told that Esau reciprocated, that he ran to meet him and embraced him, fell upon his neck and kissed him; and they wept (Gen. 33:4).

A short time later comes the verse that was offered by way of introduction to the interfaith gathering. Jacob has asked Esau to accept his gifts, which Esau declines, saying, I have plenty my brother. Jacob then says, “I have seen your face as seeing the face of God (Gen. 33:10). Expressing the purpose of the day’s gathering and of interfaith dialogue in general, the hope was offered that we strive to see the face of God in the other, especially in those who are different than us, those for whom we may feel unfamiliarity, and even some distrust.

It is a beautiful thought and one that I hold to. Much of the commentary to that verse, however, is not so hopeful or open, reflecting some of the Jewish people’s struggle through time to find its place among the nations, the struggle that comes of being a minority, that comes in response to persecution. However real these dynamics are, the great challenge is to understand them and not be stunted by them. A classic rabbinic commentary sees Jacob’s words as flattery for the sake of survival, suggesting that amidst the realities of this world it is allowed to flatter the wicked. Sadly, this reflects an inability to hear Esau’s tears or see the possibility of change or openings toward new possibility. Offering a different view, Rabbi Samson Raphael Hirsch (19th century Germany) writes: A kiss can be false but not tears that flow at such moments…. It is only when the strong, as here Esau, fall round the necks of the weak and cast the sword of violence far away, only then does it show that right and humaneness have made a conquest.

Whether in relation to those of one’s own people whose particular Jewish, Christian, or Muslim choices may be different than our own, or in relation to others of a different path to God and life entirely, our challenge is to see the face of God in the other, to receive their tears, and to seek a way forward together. When invitation is offered to sit and share, to gather and learn, a connection is made that waits to be affirmed. It is up to us to respond. It is in the Torah’s own words, without need for commentary, that we learn the way of response from Jacob, words to be spoken with sincerity of heart to all whom we encounter on the way, “I have seen your face as seeing the face of God.”