Last evening the Brookings Inter-Faith Dialogue met at the local Islamic Center. Since we had just celebrated Veterans Day, the theme for the evening was the relationship of religions to war and returning warriors. Two local veterans shared their stories, giving some context for comments from others present. Almost immediately, a third veteran denounced the idea of "holy war," saying no matter what name you give to the divinity, God doesn't ask us to kill each other. Local Muslims agreed, citing the Koran and the conviction that groups like ISIS are misusing and abusing their Scriptures and religion.

The conversation led me to remember that Veterans Day used to be Armistice Day. It was celebrated at the end of the First World War. Cessation of hostilities between Germany and the Allies took effect at 11:00 AM on the 11th. day of the 11th. month in 1918. It was declared a national holiday and remained Armistice Day till after World War 2. The idea at the time was World War 1 was "the war to end all wars." 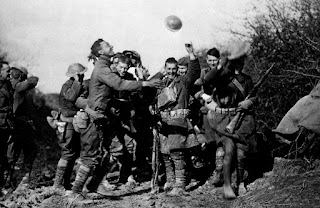 In establishing the national holiday, the U.S. Congress declared: "Whereas the 11th. of November 1918, marked the cessation of the most destructive, sanguinary, and far reaching war in human annals and the resumption by the people of the United States of peaceful relations with other nations, which we hope may never again be severed; Whereas it is fitting that the recurring anniversary of this date should be commemorated with thanksgiving and prayer and exercises designed to perpetuate peace through good will and mutual understanding between nations …"

Then there was World War 2! Once again, there were celebrations as the "greatest generation" returned. Given the destruction and global character of this war and hope for the future, the United Nations was created in 1945, where the world community could talk out their differences instead of going to war.

Armistice Day was changed to Veterans Day in the U.S. in 1954, maybe because we began to understand that we were always going to have veterans to honor because our wars were unending.

The other remembrance from the Inter-Faith gathering was a contribution to the Christian understanding of warfare provided by an early theologian by the name of Saint Augustine. He lived from 354 to 430 during a period of time when the Christian empire needed to be defended. So Augustine developed his theory of a "just war." What are the conditions one would have to meet for warfare to be considered "just?"

He cited seven, all of which should be met for a war to be considered a "just war".

1. A legitimate authority must make an official declaration of war.
2. It must be a last resort. All peaceful means of resolution must be exhausted.
3. It has to be waged with the right intention; to secure human rights; protect innocent life, etc.
4. There must be a probability of success; the situation after the war should be better than before the war.
5. War must be waged for defensive, not offensive reasons.
6. The means must be proportional to the ends.
7. Combatants must be distinguished from non-combatants. Civilian populations must not be attacked.

Obviously, these principles have not been at the forefront in governmental circles of so called Christian nations. Even though they are clearly dated criteria, were they to be honestly followed in decision making, we'd have far fewer veterans to honor and far fewer casualties abroad.

For instance: (1.) The U.S. Congress refuses to accept their constitutional authority to declare war. (2.) The historical record is increasingly clear that President Bush intended to invade Iraq from day one; it wasn't a last resort though the administration tried to make it look that way with their "weapons of mass destruction." (3.) You mean Iraq wasn't about oil; Vietnam about ideology? (4.) Fourteen years into the war in Afghanistan, are things better? And Iraq? We'll make things better in Syria with boots on the ground, right? (5.) Why have U.S. Special Operations forces been deployed to 147 countries this year and why isn't the National Guard still guarding the nation, here, in the nation? (6.) Let's not even talk about nuclear war and how the missiles are still aimed and armed. (7.) These days, more civilians are killed in conflicts than combatants. Check the recent documents on U.S. drone strikes and the hospital in Kunduz, Afghanistan. 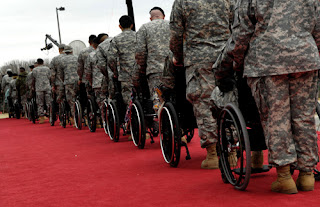