It was only a few weeks ago that TV carried pictures of the little Syrian boy who drowned trying to escape the violence in his homeland. The picture touched the hearts and conscience of people the world over and those with intact homes, especially in Europe, opened up their arms to those seeking refuge from the terrors of warfare.

Now, since the attacks in Paris, each day brings news of doors being closed as the demagogues spread fear, doing the work of the terrorists for them. 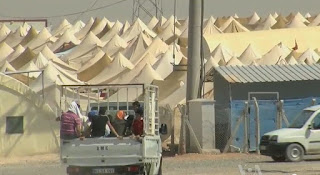 Donald Trump is now suggesting that Mosques in the U.S. may have to be closed and Muslims be registered. Any Syrian refugees coming into this country would be one too many. Apparently he is joining Chris Christie in prohibiting even Syrian child orphans from entering the country.

What's even more appalling is how both Donald Trump and Ben Carson stereotype people of certain ethnic and religious backgrounds. This is despicable. Carson is now implying that Syrian refugees will have some "mad dogs" in their midst. So none of them can be trusted to enter this country? What's next, concentration camps?

Governors are also getting into the act. Governor Pence of Indiana refused entry to two Syrian families being placed in Indianapolis in cooperation with Catholic Charities. One of the families had been in a Jordanian refugee camp for three years, the norm for many entering this country. It takes that long for them to be vetted, especially with the modest resources the U.S. Congress makes available. Fortunately, the Governor of Connecticut stepped up and welcomed the families to his state.

The irony is, these politicians are playing right into the hands of groups like ISIS. Those in the ISIS camp are terrorists after all, and the most effective weapon terrorists have is fear and division. If only they can pull off some horrific acts like 9/11 and the Paris killings, fear will drive people and governments to do vengeful and stupid things; like try to kill an ideology with bombs and missiles instead of ideas and compassion; like driving wedges of fear between people who would otherwise be neighbors in solidarity. ISIS would love to see Muslims all over the globe persecuted for their religion. What better evidence could there be for their demented holy war ideology. 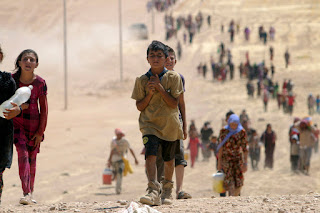 If we were honest with ourselves, we'd admit our government has been creating new terrorists left and right because of the kinds of responses we've made ever since 9/11. Motivated by vengeance and fear, the mirror is now reflecting back on us. I keep remembering how Muslim leadership in Afghanistan offered to put Osama Bin Laden on trial,  only to be denied by the Bush administration. Instead, we responded with 14 years and counting of warfare in Afghanistan and the creation of ISIS from a destroyed Iraq.

But there are wiser and more compassionate voices out there, almost unheard in the babble of media sensationalism and among all the terrorism "experts." A statement was released by the U.S Conference of Catholic Bishops, distressed by calls from elected officials to halt the resettlement program.

"These refugees are fleeing terror themselves — violence like we have witnessed in Paris," said the statement by Bishop Eusebio Elizondo, chairman of the conference's committee on migration. "Instead of using this tragedy to scapegoat all refugees, I call upon our public officials to work together to end the Syrian conflict peacefully so the close to 4 million Syrian refugees can return to their country and rebuild their homes. Until that goal is achieved, we must work with the world community to provide safe haven to vulnerable and deserving refugees who are simply attempting to survive."

The National Association of Evangelicals also asked for compassion. “Of course we want to keep terrorists out of our country, but let’s not punish the victims of ISIS for the sins of ISIS,” said Leith Anderson, NAE president. A push by Republican presidential candidates to ban Syrian refugees "does not reflect what we've been hearing from our constituencies, which are evangelical churches across the country," said Jenny Yang, vice president for advocacy at World Relief, an evangelical organization that helps resettle refugees. "Most of the people have been saying we want to continue to work with refugees, that what happened in Paris ... doesn’t reflect who refugees are." 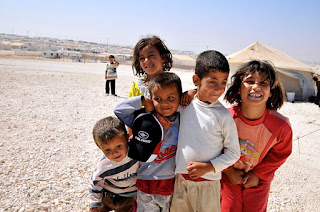 And then there are the 18 U.S. mayors who have publicly welcomed refugees to their cities. They know that since 2001, the US has admitted roughly 750,000 refugees and none have been accused of involvement in domestic terrorism aimed at the US homeland.

The real problem is, Monday morning after the Paris massacre, war industry stocks in the U.S. rose dramatically. 1.6 billion of military aid is going to Saudi Arabia to continue bombing hospitals and killing civilians in Yemen. And in the U.S., people are afraid.