I had the opportunity to be in the presence of a friend and mentor for close to three weeks this summer. His name is M.P. Mathai and he comes from India. We first met in India in 1982 at the Institute for Total Revolution, a rather formidable title for a rather modest place.

The Institute was located in the state of Gujarat on a few acres of land with some simple buildings for eating and sleeping, a large shade tree under which we carried on our discussions and a few rice fields where we leaned how to plant rice. There was nothing spectacular about the site or the circumstances or the participants. But the experience enabled a quiet revolution of perspective and practice in those who were there. 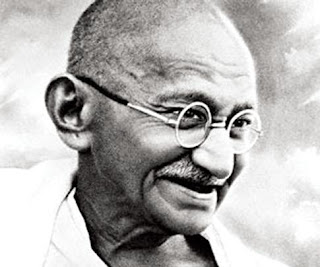 Under the thoughtful and loving eye of Narayan Desai, son of Gandhi's personal secretary and founder of the Institute, we learned about Gandhi's idea of nonviolence as a way of life. From the East and from the West, some forty of us, ate, played, prayed, learned and lived together for three weeks. In the concluding evaluation of the program, Narayan praised the way the group cared for the sick. He saw this as the most meritorious indication of having learned nonviolence. In essence, nonviolence for him was about a life of service.

How hard it is to open the mind to the reality of a different way of being in the world, without violence. Even in a society that calls itself Christian and takes as a model one who suffered and died on a cross for others, without violating anyone, even praying for those who put him there, we can't seem to believe one can live in a world without violence. In the U.S. we put Jesus at arms length, as people in India put Gandhi at arms length, as if treating people with respect and love, healing the sick and touching the lepers is only possible for God men or those far holier than us. And in our disbelief, even despair, we fail to look deeply into alternative methods of resolving conflicts without resorting to threat, coercion, harm and violence.

Lately I've been questioning whether human beings are inherently rational beings. We seem to make all these irrational choices, like expanding and updating nuclear weapons arsenals or promoting oil drilling in the Arctic, all threats to the future of life on the planet. So being with and hearing from the likes of an M.P. Mathai give me hope for the future. For he is able to communicate a clear and hopeful worldview of Gandhi, who has thought through the dynamics of violence and nonviolence and charted a path toward a less violent future. If only more would follow.

Mathai came to the states to participate in the first Satyagraha Institute. Some forty five people joined him in the Black Hills to learn more about Gandhi's worldview and his understanding of nonviolence. The program included knowledge about the theory behind nonviolent social  change; skill building in conflict resolution; opportunities for deepening the inner life through meditation, prayer and yoga; and the broadening of one's sense of community across all those barriers of race, class, gender, orientation, culture and country that separate us.

One day the Institute participants visited Ellsworth Air Force Base to visit the Air and Space Museum and learn about the nuclear mission of the base. And then the group refurbished the peace and ecology symbols at the end of the runway with a new coat of paint and replaced the poles and flags on a Native American prayer wheel, all in the hope that the planes coming and going would never again release a nuclear weapon.

On the last day of the program the group went to Bear Butte, a sacred site for many native nations. As one walks the trails there, one sees many prayer flags blowing in the breezes and tobacco ties left by Indian people. There are even stones lodged in the crooks of the trees carrying prayers for those who left them. 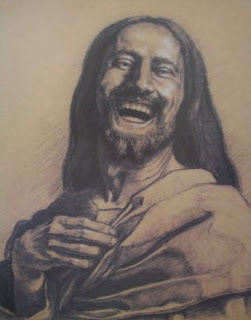 That's my favorite symbol for an eternal prayer at Bear Butte. One puts the prayer in stone and as long as it stays in place, the prayer is offered into the heavens.

Before he left the country Dr. Mathai spoke at our public library on "Jesus and Gandhi," the title of a new book he is writing. He is convinced from his scholarship that the life of Jesus was the most formative influence on the life of Mahatma Gandhi, the cross the most formative symbol and the Sermon on the Mount in the New Testament one of the most significant writings.

Both of these teachers, Jesus and Gandhi, are more relevant in our time than they were in past ages and their ideas are as fresh, though ignored, as ever. Let's resurrect them!