Last weekend my wife and I traveled to Deadwood S.Dakota for the annual Festival of Books, sponsored by the South Dakota Humanities Council. Every year there is an awesome collection of writers, with a huge schedule of presentations and special events. You can't go to it all. You have to be selective.  We signed up for a workshop with a novelist and short story writer from Florida, an old friend from our days in MA. His workshop was titled "Flash Fiction: Writing the Short, Short Story."

This was listed as a workshop but I didn't go well prepared. It didn't really occur to me I was going to have to write, not just hear about writing. I didn't have writing materials with me. So when we were told we were starting with a writing assignment, I had to borrow a pen. Then I used the back of my ticket, printed from my computer on a sheet of 8 1/2 by 11 paper, for my first "Flash Fiction" assignment.

The assignment went like this. "Think of a time when someone said something to you that really hurt. Write about it. I'll give you a few minutes."

The seconds ticked away. I thought and thought. I was beginning to think I would fail the first assignment when out of the blue a memory arrived. And this is what I wrote.

"My younger brother, who I had helped mentor, said 'You weren't there for me when I needed you the most.'  … I knew he broke down crying when he first fired a gun at Y camp. When he talked about going into the Army I didn't say, 'don't.'"

What is it about love that allows us to abandon others to the violence of the age? It could be as simple as purchasing that video game for Christmas; or taking the kid hunting for the first time; or encouraging their interest in guns by buying them one; or being passive as they go off to war. 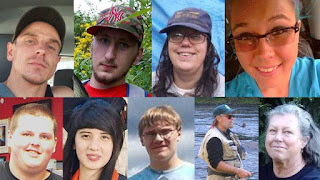 Gandhi believed that violence was an aberration of being human. Love was the ruling principle in humankind. Jesus gave flesh to that conviction, teaching self giving love rather than violence and brute force.

I'm thinking about these things this morning because our society seems to be descending into a dark, dark night of the soul. Why are so many young people killing others and themselves? Charleston was horrendous! A 21 year old killing people he just sat with in a Bible Study in a church, with clear racial implications. Now it's a 26 year old killing students at a community college in Oregon. And then there's the 16 year old in Harrisburg, right here in South Dakota.

One of the headlines this morning is about the arrest of a 16 year old in CA who is charged with shooting his father, his father's fiancee and their 8 year old son, then setting the cabin they were in on fire. Then there's the infant, 5 months old, shot in a drive by shooting Thursday in Cleveland, the third child killed by gunfire in Cleveland in the last month. In Chicago, in 3 September weekends, the numbers were: 4 killed, 35 wounded; 8 killed, 45 wounded; 4 killed, 53 wounded. All these killings are becoming so common we can't keep up with them. Do we even remember Columbine, Aurora, Oikos, Virginia Tech, Red Lake, or Sandy Hook? God help us if we can't remember Sandy Hook! And I must confess, the school shootings are becoming so common I had to think long and hard before I could remember the name of that massacre.

Personally, I'm soul sick about the violence in our society, especially the way it's affecting and impacting the young. Suicide is still the second leading cause of death among the young, just behind automobile accidents that could sometimes be classified as suicide, and ahead of cancer, heart disease, AIDS, birth defects, pneumonia, stroke, influenza and chronic lung disease combined. Four out of five teens who attempt suicide have given clear warning signs. Many of these mass shootings by young people are tragically, "suicide by cop".

The terrorists are not just outside our borders, they are among us and growing like ISIS. News sources have now compared the numbers of people in the U.S. killed by terrorists from abroad and those here at home. From 2001 to 2014, the "at home" terrorists win, by 50 to 1. And that's not including "legal" killings and suicides. 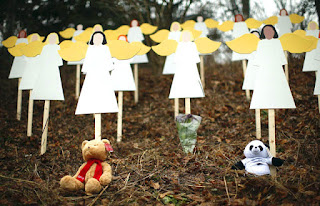 The terrorist recruiters at home are feeding our young people the same kind of propaganda as ISIS, on the internet, in movie theaters and social media sites, on TV and radio hate talk. They are propped up by the weapons industry, organizations like the NRA, ideologically driven politics and religion, and moral and political cowards in government.

Only engaged families and an engaged citizenry, convinced that we can do better by our young people, can make the changes necessary to make our schools and streets safe again. It all starts right here, at home. Once more, I recommend Americans for Responsible Solutions as one organized effort to save lives.

Carl Kline
Posted by Carl Kline at 8:00 AM