Growing up I never considered myself a minority. I am a white woman that was born in Virginia, how could I ever be considered a minority? Then my family moved to a small reservation town in South Dakota. I grew up in White River, South Dakota which is a town that is divided by a highway. On one side it is reservation land and the other side is not. In elementary school our school had a pretty good ratio of white and Native American kids. By middle school our school combined with the small communities of Norris and Corn Creek and my classmates were predominantly Native American. So I guess you could say that my childhood was a little different from the typical “white kid”. I was a minority in my school and I got the opportunity to experience a whole culture that I would’ve known nothing about if I hadn’t moved to South Dakota.

This experience gave me a unique outlook on life and the way that I looked at people of different cultures and different lifestyles. I was judged a lot in school as being a typical rich white girl when really that couldn’t have been farther from the truth. I lived on a reservation that showed extreme poverty and very little wealth. I was not the typical “white girl” by any means. Being put into a stereotype that didn’t represent me correctly and was based on my skin color made me think about the way that other stereotypes are put onto other groups of people. 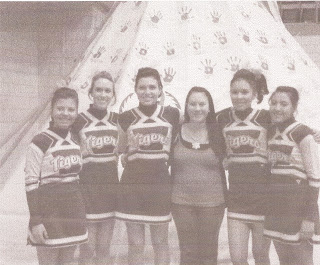 One situation that I experienced in high school that has stuck with me throughout my life comes from the South Dakota State B Boys Basketball tournament in Aberdeen. Our small town made a name for itself by having an outstanding boys’ basketball team. We had kids come from all over to play on our team and we were recognized all over the state. Even the Rosebud Sioux Tribe had honoring ceremonies for the team. I cheered at the state tournament for four years and seeing the way that people reacted to the Native American culture was crazy to see. Every year that we attended the tournament we brought a young boy to sing the Lakota Flag Song at the tournament. The crowd’s reaction every year to this never changed, they didn’t know how to react. They would look around at each other or just stare as the young boy sang in Lakota.

So many people in South Dakota would never have experienced this cultural aspect that so many people in our state recognize, if it wasn’t for our high school giving them this small bit of exposure. Even now, being in college, I see that so many people don’t know about Native American culture and they are shocked that I grew up on a reservation. Lessons like this have shown me just how important it is to respect other cultures and their practices but also not to judge a book by its cover.