I want to ask you a very personal question. I want to ask you, “What’s your story?” And, is this the story you want to tell?
We all have a story to tell. We may not be professional story tellers, but we have a story. Stories are the way we organize things and bring order to the chaos around us. Stories are how we connect events and find meaning. Recognition of the importance of stories has given rise to a form of theology called “Narrative Theology.” Narrative theology asks us to become aware of not only our story but also the stories of others. Sometimes when we see or experience conflict it may be because our story and the story of someone else are in conflict, or maybe we just do not understand what their story is. I am convinced that Narrative Theology offers us a path toward nonviolent conflict resolution. So today I want to ask you to think about your story.
There are some preconditions or assumptions we make at the beginning. First, all stories are true to the people who believe them. We cannot say that if this story is “true” other stories must be “false.” All stories are true. Second, there are usually sacred and secular versions of the story. Actually all the stories are sacred but you will see what I mean. Third, all stories are subject to change. As we change, or learn more, or have different experiences, our stories change.
In the Bible the story of the Exodus is a primary story. One popular author, Bruce Feiler, has written a book America’s Prophet: How the Story of Moses Shaped America (HarperCollins, 2009). It is not only an important biblical story, it is also our national story. I am sure you know the outline. The Hebrew people were liberated from slavery by the outstretched arm of God, who led them through the wilderness with a pillar of cloud by day and a pillar of fire by night, until they entered the Promised Land, a land flowing with milk and honey. That’s the story. And, I’ll get back to it, but first let’s look at some other stories. 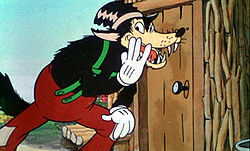 You may or may not like Donald Trump, and you may or may not agree with me, but I think he is telling a story that a lot of people are listening to, and I have been asking myself, “What is the story?” I have decided that I think the secular version of his story is The Three Little Pigs. It is a popular story and one we all know. It is also in the contemporary context a xenophobic story about a big bad wolf who is lurking at the door threatening to huff and puff and blow our house down. We need to protect ourselves. We need a house with a solid foundation and strong walls. And we need to keep the home fires burning. That’s the basic story. It has a ring of truth.
There is a biblical story that is a little bit like this story. You can find it 1st and 2nd Chronicles and 1st and 2nd Kings. Here we read about “good” kings and “bad” kings. The judgement is not based on their foreign policy or how long they were king. It is based on whether or not they were true to the spiritual and moral foundation of Israel. It has a ring of truth. We understand it, even if we don’t necessarily agree with it.
Let me offer another story. You have heard that we are all sinners. That is a basic narrative that can be found in the prophetic tradition of the Bible. I was surprised to see this same story in the movie Jurassic World. In this movie wealthy investors have built a dinosaur theme park and hired brilliant scientists to populate it. In an effort to get a better return on their investment, the investors pressure the scientists to create ever bigger and more dangerous dinosaurs. Enter the prophet who warns them that they are violating the laws of nature. Before the movie ends, the people who do not listen to the prophet are consumed by their own greed and hundreds of lives are destroyed.
Imagine my surprise when I saw the same narrative being played out in Seattle, Washington, where a ship from Shell Oil Company was trying to leave the harbor and go to Alaska to drill for oil in the pristine wilderness of the Artic. Environmental prophets hung suspended from a bridge to block the way and prevent the ship from leaving port. There are conflicting narratives. Shell Oil wants to spin oil into gold. The prophets are warning that we are destroying the earth, our home, and we will be consumed by our own greed if we don’t stop. 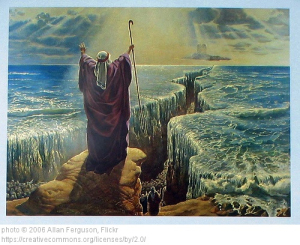 Which brings me back to Exodus. It was a story that I loved in my pre-teen years. I went to see Cecil B. DeMille’s epic movie, The Ten Commandments (1956), and I was hooked. Moses became a superstar. When I left the theater The Exodus was my new theme song. “This land is mine. God gave this land to me.” I was enthralled, until my Native American neighbors pointed out that my Promised Land is their Home Land.
As I learned more, I became aware that I did not want to sing this song any more. I did not want to make this story of conquest my story. If I was going to claim the biblical narrative, I needed a different place to belong. Eventually I turned to the story of Creation in Genesis. There I learned that God created all things and blessed all that God made. I learned that we are each created in the image of God—to remind each other of the presence of God. I learned that we were enlivened with the breath of God and entrusted by God to be partners in the stewardship of life and in caring for the earth, our Mother.
As we look to the future, a future in which we are all minorities, I believe that this is a life-giving narrative that needs to be shared. It is a story that I want to tell. Having shared my story, I want to ask you, “What is your story?”