It's been a long time for people with short memories since the fall of the Berlin wall. In my mind's eye I can still see the rejoicing as the wall came tumbling down. Families were reunited, former neighbors found each other and a symbol of terror and division was destroyed. The nightmare of a divided city was over.

Before it was built, there were some 3.5 million refugees who fled East Germany illegally in the hope of greater freedom and opportunity. The East German government claimed they built the wall to keep out the bankrupt culture of the West but no one was killed trying to cross into East Berlin. The numbers are still debated but most believe somewhere between eighty and one hundred fifty were killed trying to reach the West. They ranged in age from a one year old to an eighty year old woman.

There's another wall I've not seen in person but I've heard it described by those who have and seen pictures of it on the internet. I'm referring to the wall that separates Israel from the West Bank. It's a twenty first century response to the simplicity of the Berlin wall. For instance, the average height of the Berlin wall was 11.8 feet compared with the maximum current height of Israel's wall at 25 feet. The Berlin wall was 96 miles long. Israel's is expected to be 403 miles long.

That's not to mention Israel's added electrified fencing, deep trenches, patrol roads, thermal imaging, electronic sensors, video cameras, drones, sniper towers and razor wire. Not only does the wall keep Palestinians from their fields in many cases but it even divides a University. Check points are few and far between and people can line up for hours to get through. Some of the deaths along this wall happen in ambulances, stalled in check out lines.

Now we're seeing even more walls in Europe as many countries are building them as quickly as possible to keep out the hordes of refugees streaming across the seas from war and starvation. The scenes on the evening news are devastating. Hundreds if not thousands drowning in overloaded boats. Thousands trapped in train stations. More thousands fighting razor wire to cross unmarked national boundaries.

Governments seem helpless. Those societies not affected feign ignorance or close their eyes and purses. A few compassionate people and groups in European countries welcome "the tired and poor, the huddled masses yearning to breathe free." Why aren't there U.S. ships in that area, retrieving at least Iraqi refugees, since the U.S. is mostly responsible for their status?

And Pope Francis is right! Climate change and poverty are intimately related. Many believe the war in Syria is so intense and devastating because it has its origins not just in politics but poverty. The economic reality of a long and destructive draught made subsistence living impossible for thousands of Syrians. 1.5 million of them left rural areas for urban centers, one of the contributing factors in the revolt against the Assad regime. Now thousands of them are moving again.

Which brings me to the wall being trumpeted by one of the U.S. presidential candidates. That construction project keeps growing as candidates play to the most threatened, the most fearful, the most racist, the most greedy, the least compassionate and the most economically oppressed segments of U.S. society. Now they would build a wall not just on the southern border but the northern one as well.

We know the history of walls, if we remember. The Berlin wall did not resolve the conflict between the Soviet Union and the West. It exacerbated it. The Israeli wall with the West Bank is not resolving that decades long conflict. It's exacerbating it. A wall between the U.S. and Mexico and/or Canada will not make better neighbors. When will the country have to wall up beaches and shores? 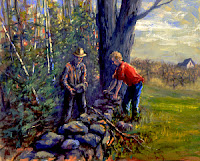 You solve problems by talking and sharing. Consider Robert Frost in his poem "Mending Wall," that "fences make good neighbors". The one he writes about he and his neighbor reconstruct together. They are the kind you can talk over and they have gates where you can walk through and share things.

My grandson was fascinated with a Veggie Tales segment when he was younger. It was the story of the walls of Jericho. He had the rewind button to the VCR. As the Israelites walked round and round those walls and blew the horn and the walls fell down, my grandson rewound the tape and played that segment again and again. What a miracle! How fascinating! That a group of people (I think the Israelites were asparagus and the guards on the walls were peas) could actually, through the power of God and ceremony, bring those walls down!

Carl Kline
Posted by Carl Kline at 8:39 AM