Once again, we have a home grown massacre that focuses our attention on a long standing problem in the American psyche. If it were just one sick soul as perpetrator, we could relegate him to the prisons of the mentally ill or to death row. But we all know the soul sickness is deeper than that. 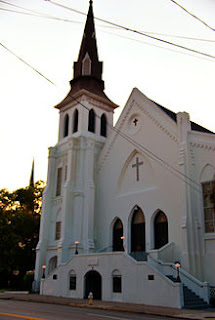 From what we have heard and read so far, it's likely the killings in the church in Charleston were motivated by racial hatred. We are forced to confess once again that nowhere in a country that celebrates equality and freedom, can one escape the reality of racial divide and injustice, if not outright hate, even in church.

It's ironic that in the same week we experienced the murders in Charleston, we heard the story about Rachel Dolezal, the Seattle NAACP President who resigned because of the controversy over her race. Her birth certificate says she is "white." She has been passing herself off as "black," saying in a recent interview that she has identified with being African American since a young age. It makes one think of the recent attention on the transgendered, where one's identity, one's psyche or soul, is different from one's physical characteristics.

Or consider the irony of how blood quantum is used to determine whether one is "Indian" or not. Because of intermarriage, the "red race" and the "white race" have gotten all mixed up. So in order to be considered Native American by Native Nations and the U.S. Government, you need to know your genealogical history so you can prove you're maybe 1/8, or whatever, of Indian blood.

And then you have what Native Americans call "wannabes," the whites who would like to be Indian. Some who make a life in Indian country may well believe they have the soul of an Indian, like Rachel Dolezal believes her true identity is African American.

The irony multiplies when we look seriously at the origins of the concept of "race." There is good reason to believe the concept started with the German philosopher Christoph Meiners in his The Outline of History of Mankind in 1785. Meiners proposed two races, Caucasians and Mongolians. He considered Caucasians (from the southern Caucasus region) more physically attractive because of their paler skin ("whitest, most blooming and most delicate skin"). He also considered them more sensitive and morally virtuous. Europeans with darker skins he considered "dirty whites," mixed with Mongolians.

His work was continued by one of the founders of anthropology, Johann Blumenbach, who added the study of skull structure and facial features to skin color distinctions. He wrote On the Natural Variety of Mankind in which he identified the "White, Yellow, Brown, Black and Red" races.

Both Meiners work and the work of Blumenbach have been used over the years by scientists and others to justify political policies like segregation, immigration restrictions and other opinions rooted in prejudice and stereotyping. Just listen to some of the candidates running for President in the U.S. today and you hear some of the same racially based stereotypes.

The reality is, there is only one race, the human race. Don't get me wrong. The color of your skin makes a difference, a huge difference in this country and elsewhere. Racial distinctions are still implicit in all of our social institutions. But it's not something inherent in who we are as people. Whatever distinctions are made, whether on the basis of skin color or skull structure or facial features or cultural characteristics or genealogy, the writers of the Genesis story and the Preamble to the Declaration of Independence were right, we are all created equal. Distinctions we create to make someone else the other, aren't a given. We make them. At base, we're all humans. 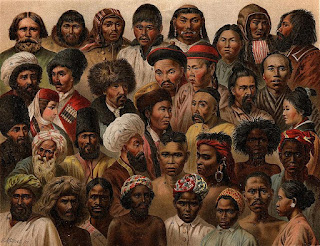 It's astonishing what lengths people will go to, to separate themselves from others who they see as below them. One could say that those who would use human differences to separate the beloved from each other, are falling victim to Christianity's original sin. There are several ideas as to what Adam and Eve eating the apple represents. But in God's eyes, in the Genesis story, the first humans are trying to be more than they are meant to be. They lack humility!

One gets the same message in the story of the tower of Babel in the Hebrew Scriptures. This is the story that tells us of the origins of our human divisions. What is the cause? Once again, it's the attempt to be more than we are created to be. It's that sense of human arrogance that we can reach the heavens and be like God ourselves. It's a sense of moral and spiritual entitlement (and in the American empire; economic, military, political and racial entitlement).

Perhaps the fundamental human value in short supply is humility. It's hard to shoot up a church when you're humble. When it comes to race and racism, a little humility mixed with a fundamental commitment to the human race, could go a long way.