Almost unnoticed by the major news media, four weeks of negotiations on nuclear disarmament ended with the scuttling of a revised treaty. Apparently the biggest hurdle was a requirement that Israel meet with Arab neighbors to discuss the development of a nuclear free zone in the Middle East.

At least that's the excuse given by the U.S. for the veto. U.S. representatives blamed the failure of a new agreement on Egypt for including the nuclear free zone idea.

It's reasonable for Egypt to seek such a zone. Israel has an estimated 400 nuclear warheads, which it won't confirm or deny. It simply stonewalls on any questions about their nuclear stockpile, since if they admitted to having them, they might be forced by international agreement to reduce their numbers.

Egypt warned that the Arab world would take a strong stance as a result of the U.S. veto. There are rumors afloat that Saudi Arabia may go nuclear as they are concerned about Israel and the possibility of a nuclear Iran.

Iran on the other hand, has requested further meetings at the U.N., in the hopes of coming to some new agreement. Apparently, they would prefer to put the world at ease as a non nuclear weapons power if only there were assurances the rest of the middle east would do the same.

At the same time, non nuclear states are upset with Russia and the U.S. because of the slow progress on reducing their nuclear weapons numbers. It's estimated both states have about 8,000 warheads with about 1,500 on missiles ready to launch at a moment's notice.

But yes, you're right! It happened! Back in 2009 in Prague, President Obama declared with conviction, "America's commitment to seek the peace and security of a world without nuclear weapons." That was then, this is now! So now the U.S. vetoes the idea of a nuclear free Middle East. And now the New York Times has reported the modernizing of the U.S. nuclear arsenal and infrastructure, and plans to spend $1 trillion over the next 30 years doing it. 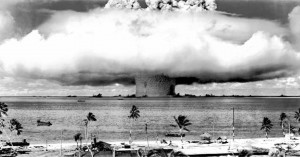 How many know the U.S. has recently been sued, along with the other eight nuclear armed countries? The suit by the Marshall Islands is for failing to negotiate in good faith on nuclear disarmament. Instead, the movement is toward modernizing and updating arsenals. And it's altogether appropriate that the island peoples who suffered as nuclear testing guinea pigs for years be the ones to bring suit. From 1946 to 1958, the U.S. conducted 67 nuclear and thermonuclear tests with an explosive power equivalent to 1.6 Hiroshima bombs dropped daily for 12 years in this homeland for some 70,000 people.

One hopes nuclear weapons can't and won't be used ever again. Unless of course there's an accident ("accidents happen" is an old and familiar saying … so you probably don't want to read the book Command and Control: Nuclear Weapons, the Damascus Accident and the Illusion of Safety by Eric Schlosser). Or unless the human capacity for madness escalates (which seems to be our tendency … M.L. King once said, "We have guided missiles and misguided men.") The primary reason for having nuclear weapons is fear and intimidation, though their possession doesn't seem to threaten ISIS as much as it threatens the U.S. government. 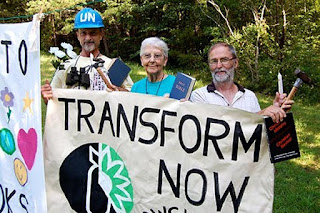 Nuclear weapons is a transient power. It's absurd to spend more money on an obsolete system that can't be used and makes us all less safe. What we need is more spiritual power, like that of 85 year old Sister Megan Rice. She was one of those arrested in 2012 for cutting through fences at the Oak Ridge enriched uranium storage facility in a protest of nuclear weapons, because she said, "we had to - we were doing it because we had to reveal the truth of the criminality which is there, that's our obligation. We have the power, and the love, and the strength and the courage to end it (the nuclear weapons industry) and transform the whole project, for which has been expended more than $7.2 trillion. The truth will heal us and heal our planet, heal our diseases, which result from the disharmony of our planet caused by the worst weapons in the history of mankind, which should not exist. For this we give our lives - for the truth about the terrible existence of these weapons."

Sister Megan was recently released from prison. She and her fellow Transform Now Plowshares still in prison, represent the strength of heart Gandhi describes. "Power invariably elects to go into the hands of the strong. That strength may be physical or of the heart, or if we do not fight shy of the word, of the spirit. Physical force is transitory. But the power of the spirit is permanent, even as the spirit is everlasting."