Tom leaned forward over the reading table as he spoke to us last Shabbos evening. Perhaps steadying himself to soothe nervousness, or to come closer to us in the way of his stance, we responded in kind, sitting on the edges of our chairs, leaning in to hear his words. Having asked for a yarmulke, when he arrived, rather than wear his hat, it sat slightly askew, his wearing it a way of honoring us. Dayenu/it would have been enough for us, as we say at the Passover Seder, honored simply to be in his presence, to welcome him, to hear him. His words came slowly and quietly at first, gradually gaining in strength and intensity, his voice remaining quiet and gentle even when offering harsh critique. Our teacher that evening, he spoke words of Torat Chayim/Living Torah/Torah of life, teachings from his own life carried on words so poignant and powerful. A “twenty year veteran of the streets,” he spoke of his life, of his early years, his journey into homelessness, his life as it is today, a person living among us, so near, so far. 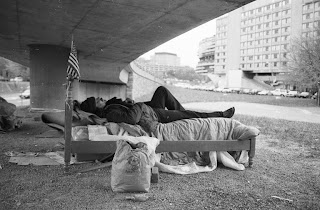 When the electronic ways of modern life that so easily isolate us from each other are infused with primal fear of otherness, we become cut off from each other; and, so too, from our Source, in Whose image each one is created. In his way and in his words, Tom reached out to bridge the divide, many divides, teaching, evoking, modeling a way of being with each other, underscoring through his presence and witness all that joins us as people. However different the stories of life experience that filled the room, of who we are and what we do, and where we live, Tom’s words rose from a place of depth, the dwelling place of his soul, joining us together as one. At times we forget the address of our own souls, becoming spiritually homeless, lost in an artificial divide between spiritual seeking and justice seeking. Tom helped us to find the way home, reminding us that the two are one because we are one, drawing us with his passion and his compassion, his love, and his lack of artifice. As spiritual freshness, we felt the common bond of human emotion that rises from all of us when we let it, when we are not afraid to share of who we are as openly and honestly as Tom did.

Tom spoke in the week of the Torah portion Vayakhel-P’kudei, his words and his presence illuminating the essential theme of the portion, of what it means to build the Mishkan, the sacred space of the desert sanctuary, God’s symbolic home among us. Of our efforts to raise up the dwelling place of God, a place for all to gather, a place that each one can call home, the Torah teaches of each one’s part and of the collective goal and purpose, to join the tent together to become one (Ex. 36:18).  Our sanctuary was one on that night, joined together by someone most often missing from our consciousness. Tom reminded us of all that joins people across the divides of our own making. As his foot tapped to the wordless tunes we sang and his body swayed to words of Hebrew prayer, foreign and familiar, we wondered of our own ability to be so at home among strangers, realizing then that we needn’t be strangers, as Tom knew and shared.

As though sharing with friends of long standing, Tom told of the pain he has known. He told of addiction and his battles to overcome, his determination and perseverance, accomplishments and failures, in that like the rest of us. He told of the cutthroat ways in the streets and in the shelters, not unlike so many realms of human encounter, not the way it is meant to be, the challenge for all of us if we would make of this world a peaceful home for all. He told of government bureaucracy, like the mean streets of an endless maze that saps strength and will and then leads back to the very same place from which one started.

Tom has stayed away from shelters, finding it easier to remain in the tunnel he calls home. He oversees who comes and goes, allowing no drugs or alcohol. He was asked at the end, “how should I respond if I see you on the street?” He answers so simply and kindly, “say hello, don’t stay ten feet away.” Then he added with a smile, “there are some I would stay ten feet away from, if they’re doing drugs or alcohol.” He took one more question, “what else would you like us to know?” “Just love people,” he said, “just love people.” 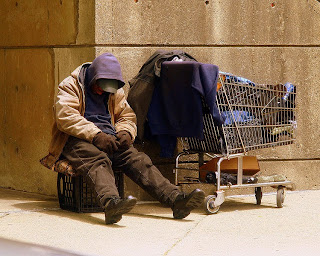 Inviting others into our places of worship and into our homes requires the same way of humility with which Tom spoke and prayed among us. In the presence of those with whom we have little encounter, with whose life paths our own rarely intersect, we learn to sit back and become honored guests in our own homes. The Torah portion Vayikra teaches of that humility from its first word, Vayikra/and God called. The last letter of the word is written very small, a small aleph. In that calling God is reaching out to Moses. Embarrassed by such attention, the little aleph reflects Moses’ humility. When we are humble enough to call out to another and open enough to receive the gift of their calling, we create the sacred space of God’s dwelling and we find ourselves at home together. Like the small aleph, we need to diminish ourselves enough to make room as equals for all who enter God’s house.

Sharing Shabbat dinner with Tom around our table later that night, there was not a word spoken among guests of ice dams or storm damage that had touched all but one around the table. It was a humbling gift in learning to keep perspective. One needs a house in order to repair its damage. As through the unfolding cycle of Torah we come soon to one of its central teachings, “and you shall love your neighbor as yourself,” we shall hear the abiding challenge in the voice of one who knows, “just love people, just love people.”