In the month of February, 2010, a group of more than thirty men, women and children were traveling on a dirt road in southern Afghanistan. They were riding in a caravan of two SUV's and a pick up truck headed to Kandahar and then on to Kabul. They all came from the same rural area of the country and were traveling together to do various things in the city. Some were looking for work, some wanted to buy supplies and some were students returning to school.

The area where they were traveling was Taliban territory so they traveled together, at night. Some were Hazaras, an ethnic group always treated by the Taliban with contempt. They were risking their lives because they had little gas and decided to take a shortcut.

Unknown to them, they were being tracked by U.S. intelligence as potential terrorists. After several hours of tracking them with drone surveillance, sending pictures back to Nevada, they were mistakenly identified as all men, no women and no children. (It's hard to tell from a camera 14,000 feet in the air that makes people look like blobs). 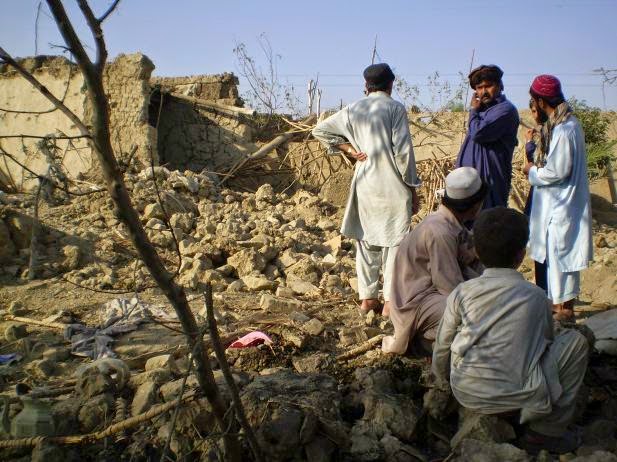 Eventually the order was given to fire and helicopters did the deed. Twenty three people died, including two boys, three and four years old. Twelve were wounded, several severely. The helicopters stopped firing after some of the women who escaped the vehicles frantically waved their kerchiefs at them.

The commander in Afghanistan apologized. Families of the dead eventually received $5,000 each, plus one goat. And if it wasn't for the reporting of Andrew Cockburn of CounterPunch, just this month in 2015, operation "Noble Justice" might have gone unnoticed.

We're told that some of those who sit at their drone control centers in the U.S., far from the results of their work, are suffering from PTSD. Even when we are thousands of miles away from where we fight to destroy evil, there are consequences right here at home.

It reminds me of the poster on my office wall, back in the 60's. Lyndon Johnson was President and we were involved in a long and costly war that many were protesting. The poster showed the police beating, savagely, protestors against the war. The caption read, "Our Foreign Policy Comes Home."

More recently, a friend asked me what we should do about ISIS, which was for him, the very incarnation of evil. He is following in a long line of politicians, even Presidents, who have a dualistic conception of good and evil. There's no gray. There's no conception of gradations of evil or goodness, especially when it comes to "friends" and "enemies."

For instance, there's no admission that Saudi Arabia chops off people's heads. It never creates a media firestorm. And did you know the U.S. state of Utah will execute by firing squad? There's good and evil everywhere we look and sometimes what looks good, is at heart evil.

Author Thomas King sums up the result of our dualistic thinking and its consequences when he writes, "… turn on your television and watch a vengeful United States, burdened with the arms of war, bomb the world into goodness and supply-side capitalism, destroying American honor and credibility in the process."

There's nothing in dualism like the eastern concept of yin/yang or the Pueblo idea that good and evil are tributaries of the same river. In dualistic thinking it's one or the other; good or evil. If you are the evil one, or the evil group, whatever is done to destroy you must be good. Then too, if you aren't on the side of the "good," you must also be "evil." Didn't a President say, "Either you're with us or against us?"

There's the rub! Evil is in all of us, even Presidents. And you can't destroy evil. Try as you will, evil will persist. And in trying to destroy evil, you add evil onto evil onto evil. Eventually it comes back on you. There must be a better way.

When Gandhi discovered that Indian men were traveling to England during the struggle for Indian independence to engage in terrorism, he went to England and met with them to dissuade them from violence. When he discovered they were using religious arguments to support their intentions, he wrote and spoke about how such arguments were baseless, and why.

Where are the Gandhi's in conflict settings today? Are they risking life and limb to dissuade the terrorists? Yes, but that's a difficult task, as many are trying to survive the bombs and hate of those who would destroy evil!

We might better heed the advice of Martin Luther King when he wrote to Christians about how to overcome evil.
First, we look for the worst evil in ourselves and make a conscientious effort to fill our lives with something better. How can we possibly know how to conquer evil in another when we don't do the hard work to send it packing in ourselves? Could we as a people, like the Hebrews of old, take a Jubilee year and look at ourselves as through the eyes of God, discerning our own sins and need for change? 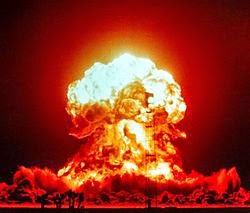 Some of the U.S. neocons still want to bomb Iran. Some aren't happy with diplomacy. Evil, in their eyes, will need to be destroyed.  And all those thousands of nuclear weapons stored all over this country, just waiting, will continue to be labelled "fat man,"  "thin man" and "little boy." And all of them will be good, destroyers of evil.