Life on an Urban Farm


“Color me green,” an old environmentalist friend used to say whenever we at Annunciation House of Worcester were undertaking an initiative that met with his approval. It was a nice but also very apropos way for him to signal agreement especially when what we were doing had to do with urban gardening, solar energy projects and the like- with the greening and the regreening of our own little patch in the wide world! It was also nice to know we were pleasing someone in the know about these things even if our efforts seemed to us quite modest considering the great needs of a planet in peril. Still we tried to be a microcosm of what could be done in an urban clime by folks who would have the Spirit move among us “renewing the face of the earth.” Conscious of some calling to this we tried and try to share who we were and are as a simple household blending a variety of influences- Franciscan, Benedictine, Catholic Worker, interfaith, hippie... praying and working for a more just and peaceful world by means quirky and personalist! Our particular vocation seems to be just trying to be open to the designs of the Divine- to utter our own distinct "Fiat" to God as best we can despite or even because of our being of the rascally sort.

We named our house many years ago at the suggestion of a former Trappist monk and carpenter. At the time, he was refashioning an old garage of ours into a chapel/prayer hut/”poustinia” (translated from the Russian, “desert place”). It was a great labor of love on his part for a family with a bunch of kids now settled in what was once a farmhouse built by Irish immigrants a century and a half earlier. Our home seemed necessarily to have a social dimension to it. There had been an old barn on the property but it had been torn down long before we arrived. But there was still an old garage, a chicken coop and a good bit of land attached to the old house here on the outer edge of what is now the second largest city in Massachusetts. It seemed to all fit together. We experimented with doing what we could to make use of the gift we had received largely because of the generosity of my wife’s mother who had bought the place from old Swedes who followed the Irish in farming here for years. We inherited what was left of the old farm. Because of my Catholic Worker connections, I was particularly inspired to include some of Peter Maurin’s (the co-founder with Dorothy Day of the Catholic Worker Movement) vision into our own family’s based on the pursuit of his three “C’s as he used to call them- “Cult, Culture and Cultivation.”

Cult has to do with the spiritual life, with giving priority to prayer, liturgy, meditation. So we have a chapel with a name inspired by the weathervane that has long perched atop the old garage displaying a hunting party on a horse following a dog in hot pursuit of a fox that was fleeing from them all. The image and story relayed in the weathervane reminded us of Francis Thompson’s famous poem “The Hound of Heaven” and so we named our chapel after the Hound who we knew to be in pursuit of us too as he was of Thompson who had been an opium addict in late 19th century London. We gather for “Centering Prayer” as a small group and take refuge in the place when “labor and heavy burdens” make for a homecoming to the one who offers us rest there. We have hosted anniversary Masses for our beloved dead and held retreat days in the chapel as well. We’ve a wood stove there to keep us warm in the winter months. 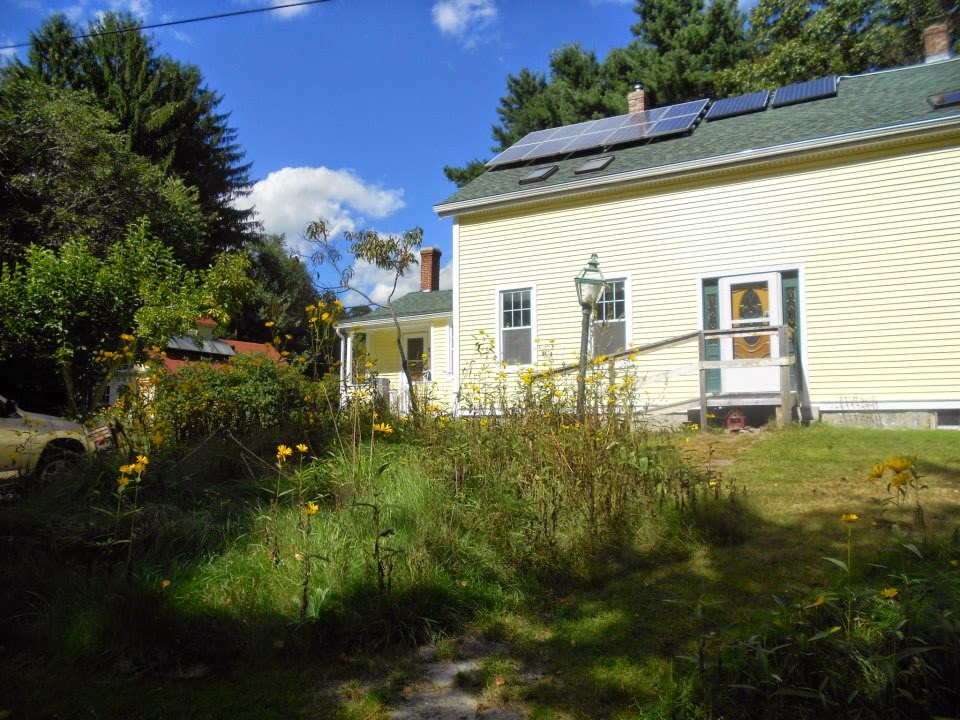 Culture has to do with the life of the mind or what Maurin called “clarification of thought”- meetings in which to talk matters over in a somewhat scholarly but also practical way. In this regard, we have a grape arbor behind the chapel and in good weather we gab there about what we hold or should hold dear.  In inclement weather, we meet in the living room for discussion and reading groups. We gather here to read and comment on books we find helpful to our spiritual and thought life. We have read from Bernard of Clairvaux’s writings and Julian of Norwich’s “Showings of Divine Revelation.” We are currently reading Dorothy Day’s diaries “The Duty of Delight.”  Following our sessions of nourishing spirit and mind, we share a pot luck supper. There is a sense of appropriate and joyous feasting and also of fulfilling Peter’s wish that there be houses of welcome, houses of hospitality.
Cultivation has to do with Maurin’s express desire that farming communes or “agronomic universities” serve as an antidote to those aspects of industrial culture that were and remain irreverent or indifferent to creation. Agricultural and craft pursuits were to be and also suggest to others the pure means whereby a more sanctified economic order could take root in the shell of the old. To this end, behind and to the side of the arbor are our gardens where we grow fruits and vegetables in the spirit of Peter’s vision that we pursue a “Green Revolution” (blessed agriculture) as the basis for securing a whole and holy life. Here we grow a lot of the usual vegetables- tomatoes, cucumbers, squash (summer, zucchini, acorn, and butternut), broccoli, cauliflower, eggplant, peas, beans (pole and string), peppers, lettuce, beets, potatoes, Swiss chard, kale, Brussel sprouts, leeks, asparagus, rhubarb and pumpkin. Last year we harvested some garlic for the first time. We have two peach trees which bore abundantly last year and growing cherry and hazelnut trees. We’ve blueberries and black raspberries, apples, pears and Japanese quince and Concord grapes too but the birds have been enjoying those more than we of late. We have in the past made grape jelly and juice. We have put up apple sauce and are still enjoying a large jar of quince jelly. Mind you, we are still city people and the gardens are of a scale as to feed the family here mostly and gift a few friends with a little something fresh and good at harvest time. We used to have chickens that provided us with eggs but gave them up some years ago and in place of what was once the coop is a greenhouse so we can get seedlings ready for planting and have a good storage space for tools. Gardening keeps us close to the soil and to an appreciation of the natural world. It draws us closer to Source and sources reminding us that we too proceed through seasons comparable to those involving sowing, weeding and harvesting. Farming puts us in better touch with our own cyclic experiences of struggle and joy, dying and rising. 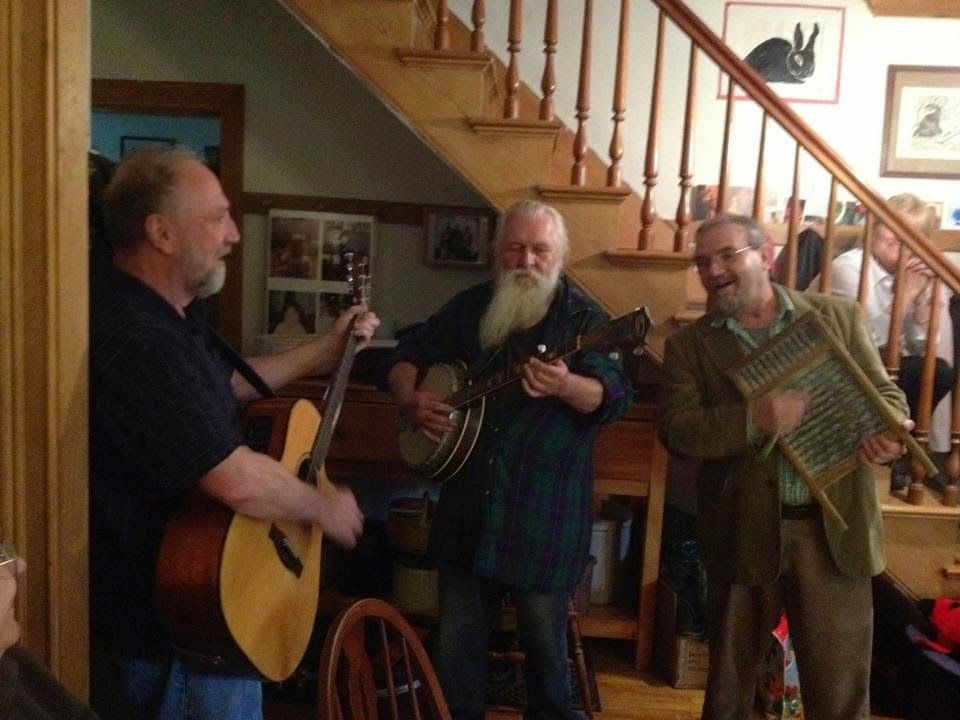 When newcomers visit, a tour is in order and once we’ve traversed the landscape and stopped by the chapel, the arbor and the gardens, the point is made that Peter Maurin’s three “C”s are all here in a row. Although the scale is modest and we need be very humble about our venture, it seems apropos that each “c” is given some attention. Like three little seeds, might they just contain the possibility and potential of generating much new growth? We sure hope so, God willing, God blessing!
(Annunciation House of Worcester has a Facebook page at: https://www.facebook.com/groups/297981285119/)
Michael Boover
First Published in Living City
Posted by Carl Kline at 1:07 PM