Several years ago when I was in campus ministry at South Dakota State University, I got a late evening phone call from campus security. They asked if I would make my way to a student residence a couple blocks from campus. A young man who lived there had just committed suicide. He shot himself. Several friends and neighbors of his were gathering at the house, sharing their shock and grief.

I went to try and offer some comfort, if not understanding. It was a night I won't forget. Talking with one of the students, she told me this was the third suicide of friends in the last year.

Then there was the young man who shot himself, a member of a congregation I served. It was not easy going to see the rest of the family when the call came. It was a complete shock to all. There were no warning signs that anyone could see. No noticeable depression. No broken relationships. And the gun made it quick and easy. 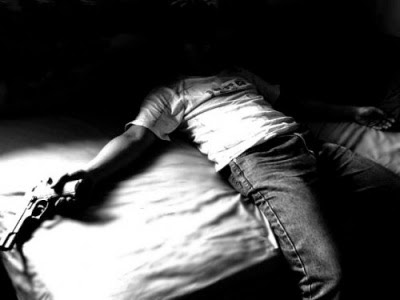 And then there was the sixth grader in another community. All of the clergy were called to the school the next day to spend time in different classes. We did our best to answer questions the young people had and strained to assign some rationality to the irrational. But it was tough, tougher yet for his friends and classmates.

Suicide is the third leading cause of death among young people in the U.S., ages 15 to 24. One can never be sure how many other adolescent deaths, like automobile accidents, are the result of self destructive, if not suicidal, behavior. It's not an easy age in any culture.

One wonders if those who are so intent on putting a gun in everyone's hand, especially young people who are known to have ups and downs and emotional swings, have ever been close to an adolescent suicide? Or I wonder if they've ever been in a fire fight, where they didn't know who was the "good guy" and who was the "bad guy", since all they saw and heard in a few seconds of response time was retreating bodies and noise? It seems these "would be white hats" have a movie set version of how they would protect themselves or another. Like the recent road rage case in another state, where the armed son goes out to protect his mother and she gets shot in the head and killed. What utter tragedy! Why in heavens name do we pay police (usually not enough) to protect and serve, and then not use their services but make their job more difficult?

But there has to be something deeper going on in the culture besides National Rifle Association lobbying, arms manufacturers making obscene profits and politicians pandering to the political right wing. Maybe the fear mania started before 9/11, but certainly since, we've been fed fear for breakfast, fear for lunch and fear for dinner. The government promotes it. The politicians run on it. The media sensationalizes it. Racism and nationalism thrive on  it. Religion will often capitalize on it with "end times" theology. The American culture has become so permeated by fear that everyone seems to think they need a gun, just in case they need to kill their neighbor (before their neighbor kills them). Maybe our nation's new policy of permanent and pervasive war, often against unseen enemies with lots of "collateral damage," is coming home to haunt us. Increasingly, maybe we're the collateral damage, not just in Yemen, or Afghanistan. 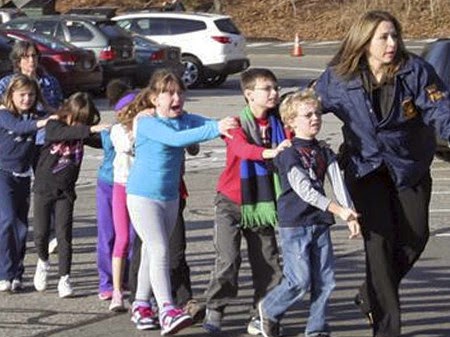 And somehow, many have taken to heart the idea that there are only two alternatives in a conflict, fight or flight. We either stand our ground with our gun and fight, or take the cowards route and flee. I prefer Gandhi's idea, a third option. How about standing one's ground and not fighting. Gandhi writes, "Nonviolence and cowardice go ill together. I can imagine a fully armed man to be at heart a coward. Possession of arms implies an element of fear, if not cowardice. But true nonviolence is an impossibility without the possession of unadulterated fearlessness." And again, "I see neither bravery or sacrifice in destroying life or property for offense or defense."

In my mind, the real hero at the Sandy Hook massacre wasn't the guy with the gun. It was the principal who gave her life for her kids. Talk about guts!