A Circle of Listening


In May of 2014, Juan Pablo Garcia of Monterrey, Mexico, had an exchange of ideas with the Civil Force State Police, because of a complaint that had been made to the Government of the State of Nuevo Leon, that nothing was being done for the boys in gangs. A Government official called Juan Pablo to ask about this public statement and set in motion a "Circle of Listening."

Juan Pablo had the idea to organize something between the police and gangs, but didn't know what to do. So he began to consult with me, and we both began to wonder what we could do with the gangs and the State police? After some days thinking about it and not reaching a satisfactory conclusion, I called a friend and colleague in the U.S.A.

My friend said, "let me think about it and please call me back in three days." So on the third day, I called and the response was, put the gang members and police face to face, let them hear from each other in "Circles of Listening."

This listening process was used in South Dakota, USA, to give Lakota people, indigenous to the region, a voice when they were seldom  heard by the dominant society. Lakota people formed an inner circle and European American participants sat in an outer circle and just listened, No interruptions, no justifications, no talk! Just silence for the listeners. For some, it recalled earlier indigenous processes where all were seated in a circle, one spoke at a time and all listened.

So when I hung up, I began to search and read about the subject on the internet, finding enough literature to understand that it was a method of understanding, so two rivals, police and gang members, could communicate.

Juan Pablo and I talked and he came to the conclusion this process could be the first truce of peace between the two sides.

We had three meetings between soul, his wife, Luis Antonio Vázquez, Verónica Oseguera, Marcela Granados, David Hernandez, Abel Burciaga and Paula Palomo in different places where everyone contributed ideas to make this succeed.

JP then called in September on the Board of our organization with the specific purpose of making this reality. For four weeks between July and September I respected the design methodology of the event which was called "Circle Listening Forces United for Peace" and presented it at the two sessions we had. In these sessions we adopted the method in general and defined variables in how to carry it out as follows:
- The number of members: 12 police and 12 gang members.
- Moderator: Lety Benavides of Channel 7 TV Azteca
- Place: Universidad Autónoma, school of psychology or research center.
- Order: First talk to gang members and then police.
- Truce: Signed the next day, after the circle of listening.
- Place: Signed on the street in the neighborhood of the Rappers.
- Training: We decided to have a prior approach with gang members and police officers a week prior to the assignment of "Listening Circles" 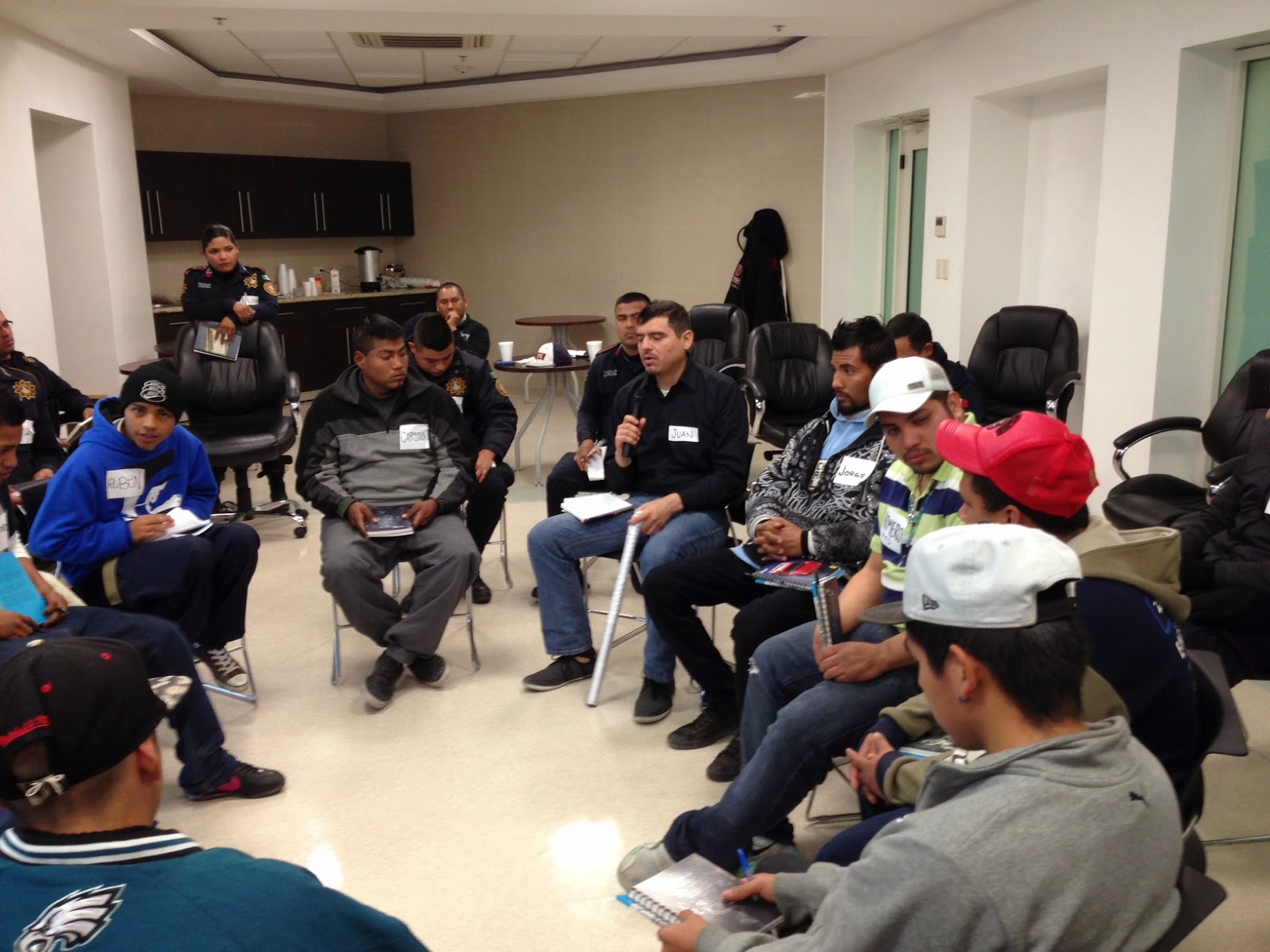 On January 15 at 10 AM we started the program, gang members settled in the inner circle and the police officers outside. For 3 hours and 2 minutes, there was total order and no one spoke out of turn nor interrupted another. That was incredible!

24 humans, thought to be enemies, listening to each other and what each had to say, to the questions and points that were raised.

Lety Benavides, the moderator, masterfully led each of them in what they brought to the session, asking them questions that increased the internalized understanding of the gang members and police officers. And it all happened with fluency and freedom in language we all understand.

Marcela and I listened attentively. And she sent her ideas for questions to Lety, and she chose and was inspired by new issues that needed to be presented to 24 participants.

I think that Lety was choosing who would be the next of the exponents to speak, and I suspect that never using an order already preset but  random and uncertain was conducive to a positive group dynamic.

There was a recess of 15 minutes and following the break the policemen talked and gang members listened. Gang members sat in the outer circle and were silent. All listened to what every police member wanted to share from the previously asked questions and Lety continued removing from them more ideas and more feelings.

In general, the members of two gangs, Rappers and Palmeros told us the story of their lives, their vices, the absurdity of wasting time and not seeing the future, the desire to change and the complaint of the ill treatment received from the police.

The police generally heard different stories because they are police officers. The majority said that they were gang members and some few consumed drugs. Some few abused young people. But in general, most said they acted correctly and with the exception of two, who stated they had been violent because of frustration with the Clikas and wanted these gang members to change the course of their lives of crime and drugs.

After those three hours of listening, we retired to a private gathering; three members of NPT, three police, Marcela, Lety and I, to formulate the agreement between the parties. It took us about an hour and a half to discern and draft the truce.

We returned to the site of the circle of listening and Juan Pablo gave a reading of the agreements. They were approved.

The next day, in the afternoon, on the streets of the territory of the Rappers, the truce was signed between the police and the Clikas authorities and the corresponding Rappers and Palmeros. Having media present attested to the agreement.

For me the most important thing of this truce is not an end but the road that led us to it and most important, the following:
• Willingness of participants.
• Desire of the Clikas and their choice to change.
• The use of a method of listening and not dialogue. The use of compassion through feelings.
• Desire of the Civil Police Force to improve and change.
• The long six-month leadership of the Clikas school.
• The long seven months of preparation of the circle of listeners and the 7 days in advance preparation for the participants.
• Having chosen correctly the moderator, Lety Benavides.
• The humanist vision developing during the process of listening and understanding ourselves.
• 24 wonderful beings that were opened to a constructive truth.
• An NGO, NPT that wants to change the circumstances and enhance the status of young people and therefore of society. And hopefully this follows, later. I witnessed that we can change, and we have to continue working to see all of us more as human as problems occur, and that the only solution is the use of non-violence and the methods already proven, as love and compassion.