My best course in economics was experiential. It took place while we were living in New York City, first on Broadway and 120th. street, then later on Riverside Drive. I was in graduate school and my wife was working to "put hubby through," what we called getting her PHT. Her salary was modest so we had to pinch pennies.

We shopped at the Coop grocery store over on Amsterdam Avenue, between 124th and 125th. Street. It was right on the edge of Harlem and a diverse but mostly poor constituency shopped there. We would take our two wheel shopping cart the few blocks to the store, fill it up and pull it home. We were eating hamburger then and would buy it at the Coop for 89 cents a pound (this was in the 60s). When we fried it up at home, half of it disappeared in the pan of grease. Actually, we got a half pound of meat scraps and a half pound of water and fat.

After eating these burgers I usually felt ill. Sometimes it meant the runs. Not feeling well it was harder to focus on my studies or other tasks before me. When I didn't feel well I didn't perform well. When I didn't perform well, I realized, I was less likely to be rewarded. Less likely to be rewarded, I was probably fated to eating Coop burgers, and the cycle would be repeated.

Working in the Youth Department at the nearby Riverside Church, I got to know lots of kids from Harlem and other poor communities in the area. They were not all superhuman. Some would never be able to escape the cycle of poverty in place in their "hood." Some few had the chance to leave, as they had special gifts or incredible survival skills. Visiting in their homes I saw and began to understand the cycle of poverty in all its manifestations, not just poor food.

In some apartment buildings there were children playing in the stairwells all night. The older kids had to go to school in the morning so they had the only bed. The younger ones had to sleep in the daytime. Rat bites were common. One apartment I was in was flooded as we stood in the kitchen. The neighbor upstairs had been giving a child a bucket bath, the bucket had spilled and the water came through the porous floor into the apartment below.

Try it! Get a good nights sleep with rats crawling through the walls, children playing outside the door and walls so thin the wind blows through them. Then get up and put in a good day's work, at hard labor.

Eventually, because we had a car at our disposal, we would drive across the Hudson River, pay a bridge toll, and shop at a grocery store in suburban New Jersey. Hamburger was 69 cents a pound, it was still intact after frying, and we didn't get sick. Our groceries were always cheaper than at the Coop, even with the toll and gas figured in.

Besides, there was fruit in New Jersey without blemishes and greens that weren't wilted. Most of the time at the Coop, there weren't any fruits or vegetables, even wilted or blemished. 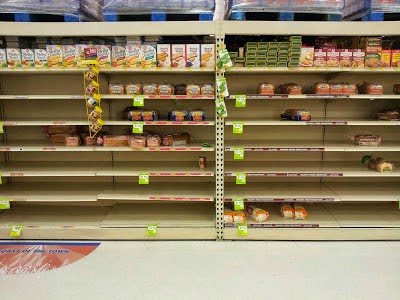 It's hard to believe but this was half a century ago. We still have millions of people caught in a cycle of poverty, perhaps more than in the 60s, in the richest country in the world. What's wrong with this picture?

At one time the U.S. waged a "War on Poverty." This was the slogan of the Johnson administration that got lost, as Martin Luther King so eloquently pointed out, in a different war, the war in Vietnam.

Then the country had a huge "peace dividend" under the Clinton Administration. Here were resources to be used for the strengthening of the commons. And that dividend disappeared, squandered in two more wars and tax cuts for the privileged.

Now there is a partisan Supreme Court that  has given even more economic power to the privileged to influence politics in Citizens United, and may well dismantle the only limited and flawed health care effort the U.S. has been able to muster in the face of big insurance and big pharmaceuticals.

Political democracy without economic democracy is not possible. When the top 1% have most of the wealth and resources, political decisions are made for their benefit and the 99% can go hang. And God help those on the bottom of the ladder, because the political leadership can't or won't.

I'm looking for a true populist movement to appear on the scene. Perhaps it had its beginnings in the Occupy Wall Street movement. The country needs people who care that this is the only industrialized country in the world that doesn't have an adequate program of health care for all. People need to care that many of our seniors are food insecure. People need to care that counties in South Dakota have off the wall unemployment rates. People need to understand the cycle of poverty and work to mobilize fellow citizens to accept their political power and reclaim their economic power as well.

David Korten has written, "The proper goal of an economic democracy agenda is to replace the global suicide economy ruled by rapacious and unaccountable global corporations with a planetary system of local living economies comprised of human-scale enterprise rooted in the communities they serve and locally owned by the people whose wellbeing depends on them."

As some work to disenfranchise the poor from voting (if you don't have a car and don't need a driver's license, where is your picture ID?), we need people working to include the poor in an economic democracy. You can't have one democracy without the other.