To Be of Tender Heart

The Jewish conscientious objector to war, let alone the Jewish pacifist who eschews all violence, is the epitome of Rabbi Joseph Soloveitchik’s “lonely man of faith.” Often walking alone, there is yet great joy in the depth of meaning to be found in seeking to harmonize ultimate values with present realities, the ideal and the real, Sabbath time and weekday time. Years ago, as a student in Jerusalem, I would engage in deep conversations with a friend as we both sought to navigate our way in the early stages along that journey. Jeremy had made aliyah to Israel in his teens and was struggling with how to deal with the army. With conscientious objection not recognized as a legal category, he found creative ways to serve, remaining true to his own conscience while managing to fulfill the national expectation to serve.

At some point during that time, I too needed to struggle with an unanticipated expectation to serve. The Hebrew University dormitory in which I lived announced that all residents would be trained to use a gun and would then be expected to take a turn doing sh’mira/guard duty. Registering my objection, I was told I would be expelled from the dorm. Far more concerned with the underlying tensions than with where I would live, of Jews and Jewish values in conflict, of violence and nonviolence, of witnessing another Jewish way, another way of being in the world, I sought to engage with those responsible for enacting the policy. At first not sure what to make of me, the officials were willing to talk and eventually we came to a creative solution. I agreed to do two weeks of nighttime guard duty as my responsibility for the year, all in the time before the training was complete and the guns arrived. While leaving important questions unanswered and making for one tired student, it was a very valuable process that affirmed in a limited context the validity of Jewish conscientious objection and even pacifism. As ostracized as I might have felt and at times did feel, my presence in the dorm was respected.

I thought about these incidents and the deeper questions they raise as I followed an on-line discussion about Jewish conscientious objection. It was a discussion that Jeremy, still in Israel, still wrestling deeply, had started. While there is much to process, I find myself touched mostly by a deep sadness, even as I seek the joy that comes from a transcendent if lonely faith. With some expressions of support and some respectful disagreement, there has been so much vituperation and rejection of even the possibility of a Jewish basis for conscientious objection to violence. I found myself stunned by the certainty, by what seemed to be a dread of even allowing for the possibility of Jewish grounds for conscientious objection. Pacifists were referred to by one respondent as “partners with evil,” pacifism as a chilul Hashem/a desecration of God’s name. As one whose first taste of the depths of Torah came through study with my own rabbi toward developing a Jewish basis for my claim as a conscientious objector, I didn’t know whether to laugh or cry as I sat bemused and bewildered. As a Jewish pacifist, an essential part of my being was called into question.

The discussion began in the context of the Torah portion called Bo (Ex. 10:1-13:16), set amidst the violence of the ten plagues. We struggle with the brutality of Pharaoh and the suffering our own people endured as slaves for four hundred years. So too, we feel the suffering of innocent Egyptians, paying in the end with their lives for the callousness of their ruler. Ruthless abuse of power and people is the backdrop, suffering even of one’s own the consequence of oppressing and dehumanizing others. It is a morality tale, one whose lessons are still unlearned in the world. The story of Pharaoh’s hardened heart is a reminder that hearts need to be softened if humanity is to survive. Trained in the way of tenderness, as vessels for humane values, it is about our own hearts, our people’s, our nation’s, the heart of all nations and peoples.

The teachings emerge, beckoning, pleading for us to look, to pay heed. In the midst of the fearsome tenth plague, the killing of the Egyptian first born, the Israelites are told not to go out of their houses, that God will not permit the destroyer to enter your houses/v’lo yiten ha’mash’chit lavo el bateychem. The rabbis themselves explained this to mean: “once the destroyer is permitted to act, distinctions fall by the way.” Rabbi Aharon Tamares, in late 19th and early 20th century Russia, one of the great teachers of the Torah’s way of nonviolence, explained that this is not about ourselves being protected from destruction but about being protected from becoming destroyers. The Israelites are not to go outside “in order not to give permission to the destroyer within them, for once having permission there will be no distinguishing between righteous and wicked, and from ‘defender’ one becomes in the end ‘aggressor.’ 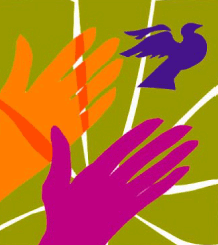 In the very name of the parasha, Bo/Come, is an invitation to engage, to come near, to ourselves, to each other, even to the oppressor. Moses is not told here to go, but to come, to approach Pharaoh. Rabbenu Bachya, from 13th century Spain, begins his commentary with a quote from Proverbs, “Happy is the one who fears always, but one who hardens their heart shall fall into evil.” It is about Pharaoh and it is about us. Rabbenu Bachya then teaches that this verse indeed commands a person to be of tender heart/she’y’hi’yeh rach ha’levav. Rach ha’levav/of tender heart, is the same term that is used in Deuteronomy to describe one of those to be sent home from the army, the tender of heart as conscientious objector. As the human heart comes to know more fully the way of tenderness, there shall be in the world surcease from war and violence. Then the road of the conscientious objector and the pacifist shall no longer be lonely, Sabbath time and weekday time as one, the deepest vision of Torah fulfilled.