Death of a King

Once again, that book display as you enter my home town library grabbed my attention. The title was Death of a King, written by Tavis Smiley with David Ritz. It's about Martin Luther King, Jr. and focuses on the last year of his life. 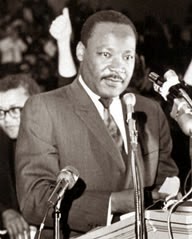 I learned two significant things in reading this book that I didn't understand earlier. Number one, I discovered considerable personal detail about the human being behind the media and public persona. Since much of the contents of the book came from interviews with those close to King, the material reveals the depth of the struggles and the intensity of emotions behind the legendary preacher. Especially in the last year of his life, King was meeting defeat and discouragement at every turn and suffering from deep depressions. Now I understand better why he had to be helped to his chair after that last amazing speech in Memphis. The man was utterly fatigued, physically and emotionally, and was called out of bed to attend at the last moment.

The second thing I realized anew, with power, primarily through all the quotations from his speeches highlighted in  the book, was that the evils in my country he identified live on, these many years after his death. Perhaps you remember his big three: militarism, materialism (with it's sister poverty) and racism. He meant this trinity as the opposite of the Christian trinity.

But we have a short memory in this country of King's last year. The media have none. That last year began with his speech at Riverside Church against the Vietnam War and ended exactly one year later with his assassination  in Memphis. 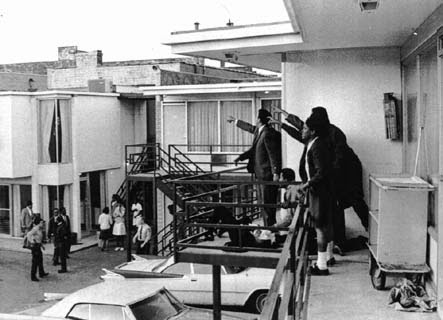 The recent U.S. election, according to the pundits, turned on disapproval of the Obama administration. But whatever one thinks of President Obama, he's been instrumental in winding down the disastrous and unnecessary wars in Iraq and Afghanistan. He's pushed for diplomacy instead of war with Iran. And he's resisted the militarists for boots on the ground in Syria.

One would think that the rise of ISIS and the flocking of radical Islamists from around the world to them, would suggest that permanent and pervasive hot war against terrorism didn't work very well. But we have become such a captive of violence as a nation, that our economy and politics continually demand more. In 1967, King called the United States "the greatest purveyor of violence in the world today." In 2014, I fear it's only gotten worse. Those were weapons made in  the U.S. that destroyed homes and schools in Gaza. And even as we are at war against radical Islam around the globe, we often find their weapons were "made in the USA."

The most recent figures from 2012 show the U.S. as the largest arms supplier to developing nations from 2004 to 2011, 44% of the total. The closest competitor was Russia, at 17%. As the budgets for diplomats, food aid, health resources in the poorest countries of the world plummets, war and weapons spending keeps escalating, defense industry keeps growing and the profiteers from misery grow wealthier. King also said, "A nation that continues year after year to spend more money on military defense than on programs of social uplift is approaching spiritual doom."

One of the most tragic consequences of militarism is the way much of the religious community has blessed or ignored this addiction to violence. Aside from the constant wars, structural violence still decimates U.S. urban centers and economic inequality destroys the hopes and aspirations of millions. In the meantime, the federal government neglects it's responsibility to form a more perfect union, establish justice, insure domestic tranquility and promote the general welfare. The prophetic voice of faith is too often silent as the church ignores social and spending sins.

As far as materialism is concerned, the money spent this year on Halloween in the U.S. was astonishing. Estimates run to more than $7 billion. It's estimated that $10 billion would provide the whole planet with safe, clean drinking water. Perhaps we wouldn't have to worry about scary things like Ebola if people had access to water, basic sanitation and health care.

The third of the trinity of evils for King was racism. We've made some progress since the days of the U.S. civil rights movement, on the surface. But it's becoming increasingly obvious the progress is only skin deep. Witness the young black men being killed in cities all across the nation, sometimes simply for picking up a bebe gun in  a department store. Witness the new Jim Crow laws operating at the ballot box. And underneath all those ugly cartoon caricatures, the debate about the President being a Muslim and not an American citizen and all those policies white Americans see as benefitting black Americans, underneath it all, is frustration with how the color of the country is changing and the future will be colorful. We hesitate to say "race" anymore, or talk race, but it moves people, forward or back.