Talking with some friends about places in Michigan, I was reminded of driving across the state once from Ludington on the West and exiting into Canada at Port Huron. For folks driving East and wanting to avoid Chicago and environs, the ferry across Lake Michigan from Wisconsin is a terrific alternative. It's a bit pricey, but not bad when you consider the gas you save and the headaches you forego. What better way to break up a long journey than with a boat trip, vehicle and all. Besides, coming into port at Ludington, you find a quaint beach town with a charm of it's own.

But this isn't meant to be a travelogue. I'm mainly interested in the town of Port Huron, especially as the U.S. celebrated Independence Day this month. Port Huron was the setting for some young people in June of 1962, dissatisfied with the way our country was failing it's ideals, especially in treating all people equally and in the growing and seemingly inevitable slide toward nuclear war. 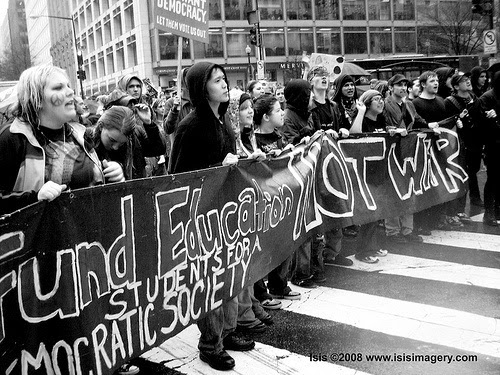 It's been more than fifty years since the Port Huron Statement. Adopted at the founding convention of Students for a Democratic Society, it helped set a tone for a revolutionary movement that set out to change the country. When I went back and read that statement, it was as if it could have been written yesterday for the situation we face today. Although there have been some changes in the last fifty years racially, there are still many who are more "equal" than others. And although some of the nuclear weapons have been shelved and cold war tensions alleviated, the nuclear threat is always one terror cell or accident away. The challenges and call to values articulated in the Port Huron Statement are still the challenges and call to values so real for our time.

Consider some of the challenges the Statement identified (recognizing that in 1962 there wasn't much gender inclusive language).

"While two thirds of mankind suffers undernourishment, our own upper classes revel amidst superfluous abundance. Although world population is expected to double in forty years, the nations still tolerate anarchy as a major principle of international conduct and uncontrolled exploitation governs the sapping of the earth's physical resources. Although mankind desperately needs revolutionary leadership, America rests in national stalemate, it's goals ambiguous and tradition-bound instead of informed and clear, it's democratic system apathetic and manipulated rather than 'of, by, and for the people.'"

Consider some of the values! "We regard men as infinitely precious and possessed of unfulfilled capacities for reason, freedom and love. … Men have unrealized potential for self-cultivation, self-direction, self-understanding and creativity. … The goal of society should be human independence … This kind of independence does not mean egotistic individualism - the object is not to have one's own way as much as it is to have a way that is one's own."

And again, "In social change or interchange, we find violence to be abhorrent because it requires generally the transformation of the target, be it a human being or a community of people, into a depersonalized object of hate. It is imperative that the means of violence be abolished and the institutions - local, national, international - that encourage non-violence as a condition of conflict be developed."

And, "the economy itself is of such social importance that its major resources and means of production should be open to democratic participation and subject to democratic social regulation."

Since these were students gathering in Port Huron, some of their greatest dissatisfaction lay with their educational institutions. For them, controversy that belonged in the halls of the academy was sacrificed for the sake of public relations; skills and services and silence were purchased by outside funders; curriculum changes seldom kept pace with the challenges of life outside the ivory tower; and of course, passion was considered the enemy of reason and un-scholastic.

These higher education problems are all too common today. They continue. Probably they've gotten worse, as public funding disappears, tenure is no longer a protection against dismissal, student debt has gone through the roof and coaches get CEO salaries.

The Port Huron Statement is good reading for any Independence Day, 1962 or 2014. It ought to be read alongside the Constitution. There are some ideas, especially among the amendments, that we might review and renew, if we truly want to call ourselves a democracy. Parades are OK, and fireworks, but we need to be rooted in some principles and values. SDS called us to them earlier. We need to be called again.

Carl Kline
Posted by Carl Kline at 7:00 AM