“Don’t put your children on trains and send them to America.”
--President Barak Obama, June 26,2014

President Obama has called the huge number of children crossing the southern border of the United States a “humanitarian crisis.” The president’s message to the families of these children, who are coming from El Salvador, Honduras, Guatemala and Mexico, is both simple and direct, “Don’t send your children.” Rather than simply telling the parents not to send their children, perhaps we should ask why the children are coming.

We act surprised to see these children, but should we be?

Is it just a coincidence that 2104 marks the five year anniversary of a military coup in Honduras that overthrew the democratically elected government of President Mel Zelaya? Romeo Vasquez, a graduate of the School of the Americas, which is housed in Fort Benning Georgia and is now called “The Western Hemisphere Institute for Security Cooperation,” and a company of soldiers under his command invaded the home of President Zelaya, abducted him, put him on an airplane and flew him out of the country to Costa Rica. School of Americas Watch (SOAW), an organization that for the last 30 years has been monitoring the School of the Americas and calling for its closure, reports that after the coup d’etat an ultra-right party with U.S. backing took control of the government.

For the last five years the government of Honduras has been on a campaign to militarize the judiciary and the country. A few “highlights” from 2014 are truth-telling and revealing. On April 9, 2014, Carlos Mejia Orellana, a human rights activists was murdered. On May 3, 2014, Rigoberta Lopez, an environmental and anti-mining activist was tortured and killed. A special unit of the National Police known as COBRAS attacked members of the LIBRE (the Liberty and Refoundation Party) on May 13, 2014. Mel Zelaya was among those who were assaulted. On May 16, 2014, Delmar Anibal Duarte, the Mayor of Iriona, Colon was assassinated.

SOAW reports that School of Americas graduates are working in concert with the U.S. corporate interests, and with the knowledge of the U.S. Ambassador to Honduras, Lisa Kubiske, a career diplomat with extensive service in the Americas.  Ambassador Kubiske supported the formation of a military unit, COBRAS, and a police-military unit, TIGERS and their training by U.S. Special Forces and the Colombian Jungle School in mountain operations, intelligence and rural operations. The importance of this type of cooperation has been underscored by Hondran Defense Minister Marlon Pascua and the U.S. Southern Command. The Honduran government also maintains working agreements with the governments of Colombia, Guatemala and El Salvador. 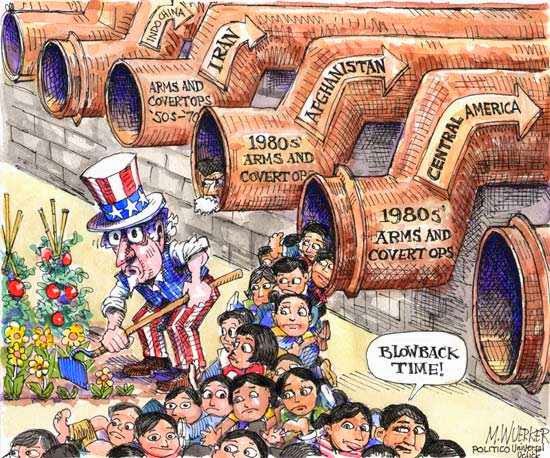 On March 29, 2014, Honduran President Juan Orlando Hernandez inaugurated a program called “Guardians of the Fatherland,” which works with children and youth between the ages of 5 and 23. Each year 10,000 new recruits are brought to military facilities for formation in morals and values and training for leadership in other government programs.

Given this history it is important to name things correctly and accurately. The crisis on our southern border is not a “humanitarian crisis.” It is a refugee crisis. And telling parents not to send their children is not the answer. The children are coming because of what is happening in Guatemala, El Salvador and Honduras. They are coming because death squads trained by the School of the Americas and supported by U.S. diplomatic and military policy are turning their country into a war zone. The so-called “War on Drugs,” which is often given as the reason for this militarization and repression, is a failed policy that is creating failed states.

The children are refugees. They are the first wave of a peace brigade. They have come to tell us that it is time to close the School of Americas. It is time to end this insane war.