To Serve and to Carry and Raise Each Other Up 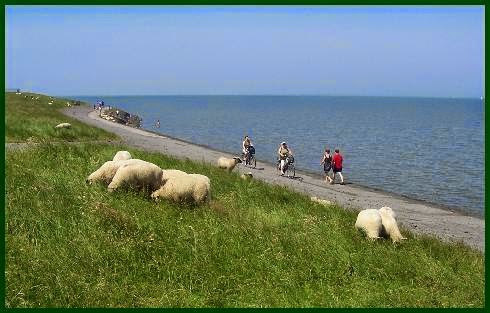 As my wife and I biked along a path that followed the Belgian coast of the North Sea, something caught my eye. It was ever so small, not sure how I noticed it or why it made me pause. There among the gray gravel of the path’s shoulder beckoned the warm tone of a tiny piece of brown flint. I got off of my bicycle and bent down to look, lifting up the small stone in my hand. I am looking at it now, taken from my pocket where it lives, becoming ever smoother as it is carried through the days amidst the small stuff of change and keys. It was probably its differentness that caught my eye, though differentness is subjective, really its own uniqueness that stood out in the warm sun of salt air and sea breeze. Smooth edged and rough in its multi-faceted way, soft to the touch when absently turned in my fingers, whether in my pocket or upon my desk. Like that day when I raised it up to look, it lifts me up too, to muse and reflect, to pause along the path.

A piece of creation itself, present in its essence from the very beginning, sometimes we raise up that which is already intrinsically holy. Sometimes it may be an object that we turn in our hands or gaze at upon a shelf that has been carried to us through the generations. In the process of our carrying and communing with things along the path we are raised up in turn, to see more clearly the way ahead and within. At times the material things of our lives have no intrinsic meaning, even as day-to-day deeds we do of necessity, empty but for the meaning we imbue them with. Not to avoid, but to engage with all the material things of this world, of deeds and details so easily mundane, to raise them up to God. So the Slonimer Rebbe teaches, one should engage with all matters of the material world and raise everything up to the Holy One, for then one surely joins the lower and upper worlds.

To raise up, to serve and to carry, each with a unique role, every person and thing imbued with purpose, that is the essential meaning, the thread that runs through the weekly Torah portion that is called Naso (Numbers 4:21-7:89). The name of the portion sets its tone and meaning. It begins with a census, naso et rosh/raise up the head, as in to count heads, insuring that each one counts. It is a census of the Levites according to their families, to each one a particular task in carrying the Mishkan, the desert sanctuary that is made to be portable, to be lifted up in all its disassembled parts and lovingly carried when the people journeyed, making camp and breaking camp, never knowing which and when on the way from place to place. Of each one who lifts up and carries and in the process is raised yet higher, the Torah says of their role, la’avod u’l’masa/to serve and to carry. It is a beautiful expression of a way in the world that is for each of us, to carry the sanctuary in all of its parts every place we go, to make every place and thing holy to God.

Lift, carry, bear, raise up, of the word naso itself, I held it up to closer view this year, to see more clearly its meaning and form, seeking with others to know its part of speech and use. It is an ancient grammatical form, the infinitive absolute, used only in Biblical Hebrew, an imperative, a bit softer perhaps, as a smooth piece of flint among the gravelly stones. In Hebrew, its form is called makor/source, as in that from which the river flows. And so it sets the tone for all of the ways of lifting up as the portion of its name unfolds. Most of all it is about people, raising up each one to their own unique task, to serve and to carry/la’avod u’l’masa, of the same root as naso. In the knowing that we are needed, in this world for a purpose all our own to carry, every head is raised a little higher. God’s face too is raised, as we pray it be upon us, the source of the Priestly Blessing/Birkat Kohanim in this portion, yisa ha’shem panav elecha/may God’s face be lifted unto you, v’yasem l’cha shalom/and grant you peace. It is peace, the Slonimer Rebbe teaches, that holds together all the disparate elements of creation, fire, wind, water, dust of earth. To serve and to carry, ever seeking to raise up the Mishkan in all its parts and find such union among ourselves, so beautiful in our diversity, in essence all the same. The princes of Israel/n’si’ey Yisra’el, each one a nasi, bringing the gifts of their own tribes, and all the gifts are exactly the same down to the smallest detail. More than the gifts raised up in all their sameness, the princes raise up each other, none to compete, none be let down or diminished. Of the same root as naso, the nasi is one raised up to a special task, “bearers” of the people, as Rabbi Samson Raphael Hirsch describes the role of leader, whose most important task is to raise up the people, “to elevate the nation to equal height.” 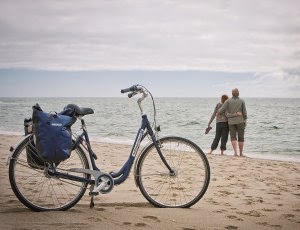 And so it is in marriage, as in every partnership and social contract, raising each other up for the common good, the commonweal that is greater than each one. The second part of the two parts of the Jewish marriage ceremony is called nissu’in/raising up, of that same root, naso. I think of my beloved, cycling together along the North Sea, cycle of life turning, raising each other up, a smooth piece of flint to remind.