There Is No Just War

I'm thinking this morning about all the hoopla and celebration over the death of Osama Bin Laden, one ideologue who killed civilians to make a point. Relief, I can understand. Even grief, in remembering the deaths of the innocent. But this is the same ideologue who used to be our man in Afghanistan, when the Afghans were fighting the Soviets.

"Our men" change, I guess. They lose favor, like Saddam and Qaddafi. Osama bin Laden lost favor, but he certainly hasn't been alone in using terror as a weapon. So did those other one-time friends of U.S. policy makers.

It used to be that terror against civilians and civilian deaths in pursuit of a just and righteous war were avoided. Augustine included it as a principle in his Just War Theory. He included several precepts in his criteria, all of them necessary for a war to be just. But it certainly couldn't be a just or righteous war if you were killing non-combatants.

We hear this avoidance mantra periodically from our U.S. military, especially as there are reports of civilian deaths from drones in Pakistan and Afghanistan. I'm sure the U.S. military tries to avoid civilian deaths. It just makes sense when you're trying to win hearts and minds in a country you occupy.  Still, there are hundreds of thousands of civilians dead in Iraq and Afghanistan. They were alive before we invaded.

And that's only the U.S. Consider the "collateral damage" in Sudan or Mexico or Syria or Israel/Palestine or Colombia or Libya or ... you choose! Civilians have become a prime target in modern warfare, often used as sacrificial lambs to advance political or economic goals. Osama bin Laden was an eminently theatrical practitioner of an increasingly common tactic; defeat your enemy by dramatic terror tactics on innocent bystanders. Can we be honest enough in the U.S. to admit Hiroshima and Nagasaki were like that?

What troubles me most is, the vengeance is all so unnecessary. I was reminded the other day by an article by Gareth Porter, that before we attacked Afghanistan the Taliban were trying to negotiate a trial of Osama bin Laden with the White House. Apparently, one of the problems for the U.S. (besides imperial arrogance) was the Taliban wanted Moslem states, including religious scholars and leaders, involved in the trial.

What a missed opportunity! That's exactly who should have been responsible for judging a terrorist who perverted the Islamic tradition. Instead, we started two wars to get Osama bin Laden and Al Qaeda, against Moslem states. And we say we aren't at war with Islam? It's to bring justice to a terrorist and his henchmen, we say.

If that's true, all of our soldiers and resources should be home now, right? Bin Laden is dead, Al Qaeda supposedly in disarray. After all the dead, wounded, disabled, and refugees; after all the debt on the national credit card; after all the wasted resources, human and material, that could have been used for building, not destroying; where are we? The apologists say we must continue our perpetual war against  terror, as our wars against terror have created more terrorists committed to spreading more terror. Be afraid, they  say, and leave things up to us. So people hunker down, afraid, on both sides of the planet. And the terror wars speed along toward the inevitable planetary train wreck. 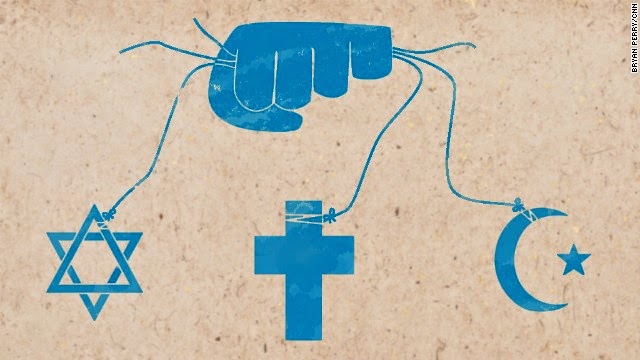 It's about time civilians in this country decided whether the risks and rewards of the war on terror are worthy of our national pursuit. I'm hearing terror fatigue, war weariness, resource depletion, unfunded human needs. It's time to bring the troops back, close ninety percent of the hundreds of world wide military bases, and create meaningful work for healthy, educated citizens here at home. If we were to forswear our addiction to empire, I believe knowledgeable Muslims, Christians and Jews would be encouraged to spread the true values and tenets of their faiths that abhor notions of holy war. Together, at home and abroad, we could undercut those who would use religion to kill and terrorize.