Andy Borowitz has to be one of my favorite columnists. He writes satire for the New York Times. In the email copies I receive, there is always a warning in bold letters that it is satire. Otherwise, many might find what he writes quite believable.

Some weeks ago, his Borowitz Report included a picture of Pope Francis in his mitre, what the satirist called his "pointy hat." The column, reportedly sent from Vatican City, said Francis was "seriously considering losing the hat."  Borowitz quotes the Pope as saying, "I know I'm going to catch hell for saying this but it looks kind of dumb." Then he suggests Francis would prefer something different , maybe a baseball cap or something.

I shared this picture and column with some of my students and asked them if they found it credible. They were mostly confused. They were aware that Francis was charting some new courses for the church but weren't quite sure about a Pope in a baseball cap. It led to a conversation about knowing context, who your writer and audience is and the kind of literary form the writer is using. Knowing the writer was a satirist made all the difference.

Two of the recent Borowitz Reports have been about Iraq. There's plenty to satirize in this ongoing tragedy. One aspect of the tragedy in the U.S. is the continuing media attention given to some of the architects of the war, who regularly try to salvage their disastrous invasion and occupation.

For instance, Dick Cheney is in the news again, offering scathing criticism of the Obama administration for not leaving large numbers of U.S. military personnel in the country. Here's a person who did much to deceive the American people about the reasons for the war, justified torture at every turn, and now trembles to leave U.S. shores for fear of being arrested in other lands as a war criminal.

On June 17 Borowitz had a column on Cheney. The headline was, "My Thoughts and Prayers Are with the Iraqi Oil Wells." According to Borowitz, thinking about this new crisis in Iraq and the danger to all those oil wells was keeping Cheney up at night. The column concludes with Cheney saying, "If I prevent one drop of precious oil from  being spilled, it will have been worth it."

His colleague in promoting an unnecessary war, Paul Wolfowitz, said on a Sunday talk show we should have been willing to stay in Iraq for 60 years, like we did in Korea. This is the same guy who back in 2003 said the Iraqi people would welcome us, it wouldn't cost us much as we could be paid back through Iraqi oil revenues and he wouldn't support a long term presence. 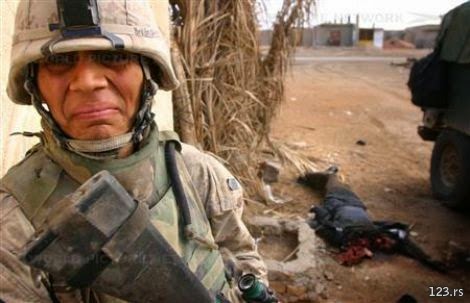 Rather than spilt oil or a spilt treasury, we ought to focus on spilt blood. There's been plenty! We all know someone who left blood on Iraqi soil. They are our brothers, our friends, our neighbors. The war has gone on long enough that some spilled blood there more than once. Others left flesh and still others their spirit. Some came home dispirited, with that original life giving breath of God squeezed out of them.

What agony it must be for them to see the violence continue, even escalate, when they were given to believe that their sacrifice would ultimately lead to a democratic Iraq. And how difficult to see a force more extreme than Al Qaeda develop and take root in places where they fought and died.

And think of the Iraqi people. Thousands are dead or wounded. Hundreds of thousands are refugees. Estimates are that 70% of deaths from the violence of the war are civilians.

Now John McCain says there are no good options for the U.S. in Iraq. But all he can recommend is more of the same and joins  the "blame game."

Borowitz writes on June 19, "Congressional leaders left the White House on Wednesday 'deeply frustrated' that President Obama had not found a swift resolution to the conflict between Sunnis and Shiites that began in the seventh century A.D." John Boehner reportedly said, "This struggle between Sunnis and Shiites has been going on for almost fifteen hundred years. That means President Obama has had ample time to fix it." 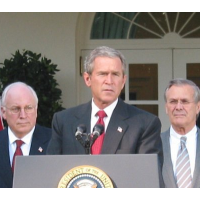 Of course, Sunnis and Shiites lived peaceably together in Baghdad and other places before the war. The war exacerbated religious tensions, especially when we installed the Maliki government with no intensions to be inclusive of the Sunni minority. Let's put responsibility where it belongs! The Bush administration ignored the wisdom of many as to the outcome of this disaster and now we have a President who is going back into a continuing catastrophe with more advisers, more weapons, more violence.

Are we so devoted to being number one in military strength, economic dominance and exploitation of the world's resources, that we must accept perpetual and pervasive warfare forever? Are we so lacking in basic compassion and diplomatic skills that we are willing to accept a politically polarized world like we see in our own country? Are we so devoid of leaders with wisdom and foresight to chart a course out of the morass of war?