A Thin Thread of Water


The room was alive with excitement as we climbed the stairs and entered Spontaneous Celebrations, Jamaica Plain’s community cultural center. The air pulsed with conversation, with laughter, with different languages, strains of Middle Eastern music wafting and dancing up to the rafters. We had come to see a mosaic mural on display for the first time, even as it awaits completion, itself a metaphor, the process as its own essence flowing toward fullness. The project speaks of itself as “seeing through walls,” offering as its purpose “to promote peace and an end to conflict between Israel and Palestine…, our vision of peace, justice and hope for the Israeli and Palestinian people.” Like those gathered to see and affirm their work, the artists are of diverse backgrounds, their own process painstaking in determining over time the mural’s design, love and determination palpable in coming to this day of its presentation. 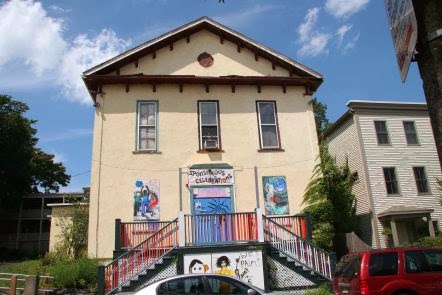 We slowly made our way to the front of the room to see what we had come to see, the mural itself, though perhaps it really was the people we had come to see, brought together by the mural, as it is meant to do. I saw a friend and colleague in building bridges between Muslims and Jews. Mohamed and I embraced and laughed, delighted to see each other here, drawn without plan to this place of bridge-building. He introduced me to one of the artists, a Palestinian. I introduced him to an Israeli, a relative of one of the Jewish artists. We were all part of a web of connection, standing there in front of the mosaic, all of the small tiles in careful arrangement and brilliant color doing their work before we had even paused to really look.

I stood and stared, taking in the beauty of the mosaic, a sense of quiet suddenly surrounding, walls to be seen through, not to divide, a great golden sun rising beyond for all to see and be warmed by, and there a path to be illumined by the golden light. Two women are painting the wall, their backs to us, each wearing a smock, the Star of David on one, the Crescent Moon on the other, a Jew and Muslim creating together. On the buckets of paint into which they dip their brushes are the words peace and justice in their respective languages, the colors of hope in their striving. There are children playing together in the foreground, swimming in a stream, playing along its banks, some running and flying kites, one floating a boat upon the water, its sails filled out to show Israeli and Palestinian flags. And then I pause and look up toward the top. There is the golden dome of the Mosque of Omar that stands upon what Jews know as the Temple Mount, the Har HaBayit/the Mountain of the House. The light of the sun is refracted through human creation, offering even greater brilliance. And then I look more carefully. Here is the trickling start of a spring that way down below has expanded into the swiftly flowing stream in which children play. It begins at the top, on the holy mountain, as a fine blue line of tile, a thin thread of water.

I am mesmerized, as I had been some weeks ago by a teaching I came upon in the Talmud that has captivated me, that has stayed with me, an image formed of words that won’t leave me, begging for insight. Here before me was the interpretation I had been seeking. It begins as a vision of the Prophet Ezekiel (47:3) in which he follows a stream of successively increasing depth, beginning as a trickle of water flowing from under the threshold of the Holy Temple on that same holy mountain. Drawing on that vision, the teaching in the Talmud (Yoma 78a) fluctuates in time, fluttering between past and future: 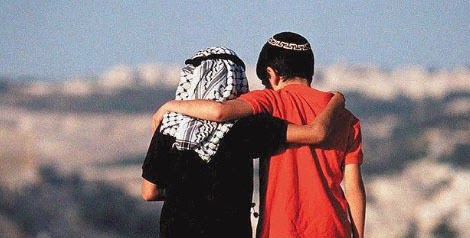 In the Torah portion of that week, called P’kudei (Ex. 38:21-40:38), the desert sanctuary is completed; “all the work to be accomplished for the Dwelling Place of the Tent of Appointed Meeting was completed….” In time to come, the Tent of Appointed Meeting becomes in the Holy Temple in Jerusalem the Holy of Holies from which the stream begins its flow so fine, as thin at first as the antennae of a grasshopper, as a fine line of blue tile. And now I understood. As in time the desert sanctuary was completed, so too shall the mosaic mural be, and so too the hope of which it sings, of peace and justice, the land and its peoples cleansed and purified of violence and hate. And in that swiftly flowing stream, Israeli and Palestinian children shall play, in peace and unafraid.

The photo from 1993 of the two boys is fake. They are in fact two Jewish boys who posed for photographer Ricki Rosen, for a commission from a Canadian magazine.